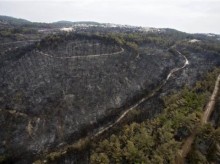 A burnt forest after the massive wildfire. (AP Photo/Sebastian Scheiner)

JERUSALEM (AP) — For more than a century, planting trees in this mostly desert land has been an act of almost spiritual importance, starting with those who helped create the state of Israel.

So, the emotional response to the worst wildfire in the country’s history, which tore through one of its few natural forests over the weekend and killed 42 people, has been to seek to replant — and donations are pouring in from around the world.

But forestry experts caution that the best road to recovery for the Carmel forest may be to do nothing and let nature take its course — an idea that is running into resistance.

The four-day forest fire that reached the outskirts of Haifa, Israel’s third-largest city, is seen as a calamity in Israel, where only 7 percent of the land is wooded. The Carmel forest makes up 5 percent of that wooded land.

The inferno burned down 5 million trees and about a third of the nature reserve, where 100-foot (30-meter) oak, pine and cypress trees once stood. Blackened, barren hilltops are all that remain, and charred tree stumps stick out of the ground like gravestones.

Russell Robinson, the head of the Jewish National Fund, a world Jewish group devoted to planting and maintaining forests in Israel, has vowed to replant the trees. His organization quickly raised upward of $1 million out of the $10 million it hopes to generate in the coming year to fund a range of restoration and fire prevention measures.

“I see the spirit of the people who are going to be a part of rebuilding it tomorrow,” Robinson said. “This land will turn back from black to green.”

For generations, the JNF has preached the planting of trees as an ultimate act of Zionism. Known for its blue-and-white collection boxes and fundraising campaigns, the JNF has planted 240 million trees across Israel.

Researcher Dan Melkinson of Haifa University warned, however, that the extent of the fire — which caused almost twice the combined damage of all previous Carmel fires over the past 30 years — required a patient approach to study which areas could recover naturally and which needed replanting.

“We propose to let the ecosystem regenerate itself in the coming year without any intervention. Any reforestation entails moving into the area with heavy machinery, and that destroys the flora,” he said. “The approach is not to go out and bring back the green, but to observe the ground and consider where to plant anew and where not.”

The debate boils down to the very essence of trees in the Holy Land. The typical Israeli forested landscape is made up of planted, planned lines of pine trees. And for generations, the JNF forests have been an integral part of Israel’s nation building.

Natural forests like the Carmel, on the other hand, with wildlife and diverse ecosystems, are rare.

Those who care for the two distinct types of forest have different goals, explained Omri Gal, a spokesman for the Israel Nature and Parks Authority, which administers the Carmel area.

“The JNF forests are for the enjoyment and recreation of people. Our goal is to preserve nature,” Gal said. “The public wants to help after something like this. They feel that by planting a tree where another was burned they are helping, but this is not always true.”

Researchers note that forest fires are not necessarily all bad. Low temperature blazes can actually enhance the soil with nutrients from within the old trees and create natural recycling for greater biodiversity. Particularly with pine trees, where seeds are trapped in cones and explode when exposed to heat, the potential for renewal is great.

Unfortunately, Gal said, the country was not blessed with these “good fires” that normally result from bolts of lightning during summer storms. Arson, negligence and other human factors account for almost all of Israel’s fires.

Israel’s minister of environmental protection will oversee the recovery efforts, heading a task force made up of experts from the government, agencies and nature groups. The ministry’s spokesman, Yekutiel Zafari, said all were in agreement that for the first year, “nature must take its course.”

But Omri Bonneh, director of the JNF’s northern region, said that approach takes many years. He pointed to the slow recovery of planted forests in northern Israel that were damaged by Hezbollah rocket fire from Lebanon during a monthlong war in 2006.

The first stage of rehabilitation of those forests — using a mixture of the two approaches — has only now been completed and a full recovery will take decades, he said.

He said a hands-off approach could be effective but only to a degree.

“This is the mother of all fires,” he said. “When it comes to planted forests, we will have to get involved in planting again.”