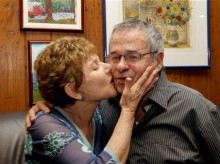 JERUSALEM (AP) — As a small country that takes special pride in the achievements of its best and brightest, Israelis were delighted that two of their own won this year’s Nobel Prize for chemistry. But the celebration was tempered by a single fact: The duo left Israel long ago for greater opportunities in the U.S.

The Nobel victories this week have touched a raw nerve about an exodus of scientists, academics and business leaders over the years, and fueled an anguished debate about whether the country can do more to retain its best talent.

Israeli academics have long warned that the nation is losing its intellectual edge and that serious attrition could undermine a creative culture that has helped pioneer everything from Internet telephone calls to instant messaging to pills with microscopic cameras.

Wednesday’s Nobel announcement in Stockholm, Sweden, came just days after a respected research institute released a report claiming the country suffers from the highest rate of brain drain in the West.

Among the findings by the Taub Center for Social Policy Studies in Israel: For every 100 faculty members at Israeli universities living in Israel in 2008, 29 others have left to work at American universities — where they were paid far more and had access to resources and facilities that produced better science. It also noted that the country’s top universities have fewer faculty positions today than they did four decades ago.

The mixed feelings in Israel were highlighted at the Weizmann Institute of Science, where Arieh Warshel and Michael Levitt first collaborated on the research that earned them the Nobel. The institute issued congratulatory messages to the two, but also faced tough questions over how they let such prodigies slip away.

“There is a sense of a missed opportunity and mistakes were made along the way,” Weizmann Institute President Daniel Zajfman told Israel’s Channel 2 TV. “Everyone talks about bringing the brains back, but you also need to keep them. It is very hard, the temptations outside are very great. There is indeed a war here.”

Warshel, a 72-year-old professor at the University of Southern California, was born in Israel, served in its military in the 1967 and 1973 Mideast wars and earned his doctorate at Weizmann. He worked there as a scientist for six years in the 1970s but left for the United States after he wasn’t offered tenure. Levitt, a 66-year-old professor at Stanford University, is also an Israeli citizen and in interviews said he encountered academic obstacles that pushed him abroad.

“Israel doesn’t give a lot, and that’s why people are leaving,” Levitt’s wife, Rinat, told Israel Army Radio. “This is a result of pettiness, small-mindedness, and people who can’t think big.”

Martin Karplus, the third Nobel winner in chemistry this year, also has Israeli connections. When an early morning call woke him at his home in Cambridge, Mass., with the congratulatory news, the 83-year-old emeritus professor said he initially feared something bad might have happened to his daughter — who lives in Israel.

The loose links didn’t stop Israel’s president or prime minister from calling to congratulate the winners. Nor did it stop the science minister from boasting of “national pride.”

Opposition leader Shelly Yacimovitch countered by saying Warshel’s accomplishment was “testimony to the strength of the past” of Israeli higher education and warned that “if we don’t come to our senses, we won’t have many similar accomplishments to take pride in in the future.”

In its early years, Israel built a half-dozen top-flight universities that have become among the world’s finest. Israeli academics, for instance, have won six Nobel prizes in chemistry and economics in the past decade alone.

But the country’s higher education system has fallen onto hard times. In its latest survey of the world’s top universities, Times Higher Education, a British publication, lowered the rankings of leading Israeli institutions. The Hebrew University fell to 191 from 137 last year, Tel Aviv University fell to 199 from 158, and the Technion, Israel’s top technological university, fell out of the top 200.

The country’s infectious entrepreneurial spirit was nurtured by generous government backing of R&D in the 1990s to create a hi-tech boom that earned it the nickname “startup nation.” The military proved to be a fertile training ground for promising engineers, and a million immigrants from the former Soviet Union over the past two decades gave a sharp boost to science and technology. Numerous breakthroughs were pioneered in Israel, such as Wi-Fi technology, the computer firewall and instant messaging.

But Israeli academics also suffers from a steep slashing of government financing along with an antiquated structure that eschews reform and offers only paltry salaries for top professors. The number of full-time academic positions has dropped dramatically while the number of students has grown steadily.

Even those Israeli academic expats who want to come home for emotional, rather than professional, reasons often have few or no options for employment.

Menahem Ben-Sasson, president of the Hebrew University in Jerusalem, criticized the country’s leaders for not taking the matter seriously.

“The main resource Israel has is the human brain,” he wrote in the Maariv daily. “The research activity overseas allows our scientists to present their research and get international grants that are necessary to promote them,” he wrote. “It is our responsibility to open the door for them and provide them the same working environments and tools they have abroad.”

While other countries suffer from brain drain, the phenomenon is considered an existential threat in Israel. Good science is essential to national security, fueling breakthroughs that put Israel at the forefront of missile technology and other measures needed to safeguard it from its enemies.

“Academic institutions around the world ask themselves: What is the Israeli formula? How do they do it?” Raanan Shaked, a columnist for Yediot Ahronot, wrote cynically. “The answer is simple: We take the best brains in the world, give them as little as we possibly can, furnish them with as many reasons as we can to leave … and they, in return, win Nobel Prizes and make us brim with national pride that prompts us to embrace them as they whine ‘I’m part Israeli.'”