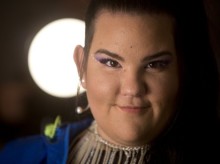 JERUSALEM (AP) — Israel’s winner of last year’s Eurovision song contest said Monday there was no place for boycott calls of this year’s competition in Tel Aviv, saying that to snub such a popular world event celebrating diversity would be akin to “spreading darkness.”

“Being on the same stage, no matter what your religion or ethnicity or color, from all these countries, from all these cultures, this is a festival of light,” she said, at the annual meeting of the Foreign Press Association in Jerusalem. “For people to boycott light is spreading darkness. It’s the exact opposite thing.”

The singer’s win last year with the catchy pop anthem “Toy” earned Israel the honor of hosting the 2019 Eurovision competition next month.

But supporters of the BDS movement, a Palestinian-led campaign advocating boycott, divestment and sanctions against Israel, have been calling on artists to pull out of this year’s contest because of Israeli policies toward the Palestinians. Iceland’s representative has said it would be “absurd” to participate, and boycott activists recently renewed their call for the country to withdraw completely from the event.

Activists had targeted Barzilai even before last year’s win, launching a campaign calling on voters to award her zero points. She said over the past year she has encountered angry protests across Europe as well.

“I personally think it is bullying to artists. If you have a demonstration, go and make it where it should be. My business isn’t representing. My business is music, and my business is spreading light and love,” she said.

However, the charismatic Barzilai, sporting a black, frizzy skirt and a crop-top exposing her midriff, insisted she has no interest in politics.

“I’m not a political person and I represent Netta. Netta loves Israel. Netta loves her people but when I will say my political opinion, I will bring hearts apart instead of bringing them together,” she said. “Yes, I am Israeli, and I will let politicians do their work.”

Barzilai’s physical appearance has upended traditional notions of what it takes to be a female pop star, and she has become a model for plus-size women. She has been unapologetic about her weight, the loud colors she wears, and the funky chicken moves and sounds that have become her trademark.

She said the sounds evolved from a knack for imitating animals that she developed as a youth, when she was routinely mocked by other kids. Over the last year, she said she has been approached by so many children who say her success has helped them feel they are no longer alone.

She said it was this she discussed with Prince William in his visit to Israel last year, just one of many high-profile events she has embarked upon since being crowned queen of European song.

Israel boasts one of the Eurovision’s most rabid fan bases. Fans flooded Tel Aviv’s Rabin Square in front of City Hall, with some euphorically jumping into a public fountain, after Barzilai was announced the winner last year in Portugal. The City Hall building was lit up to spell “Toy” and electronic signs throughout the city congratulated her.

Tel Aviv is now set to host the event for the first time, expecting thousands of tourists to arrive for the campy, gay-friendly spectacle. The semifinals will be held on May 14 and 16 followed by the Grand Final on May 18.

The Eurovision has previously provided Israel with some cultural touchstones.

“Hallelujah” became the country’s unofficial national song after it won the contest for Israel when it hosted the event in the late 1970s, and Dana International became a national hero and global transgender icon when she won with “Diva” in 1998.