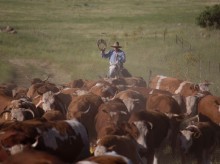 Israeli cowboy Yehiel Alon rides on horseback as he rounds up some 650 head of cattle, Golan Heights. ( AP Photo/Ariel Schalit)

KIDMAT ZVI, Golan Heights (AP) — With his wide-brimmed hat, Wrangler jeans and ornate belt buckle, Yehiel Alon could easily pass for one of the Montana ranchers he once worked with. But the 53-year-old is an Israeli cowboy on the Golan Heights bordering war-torn Syria, where frontier life takes on a whole new meaning.

“It’s probably the only place on earth where you will see cows alongside tanks,” he says with a smile, a cigarette dangling from his lips.

Herding cattle in these parts is no job for greenhorns. Alon has got to keep them from stepping on decades-old land mines, wandering into military bases or being shot in nearby firing ranges.

The tranquility of country life contrasts sharply with Middle East tensions all around. Prime Minister Benjamin Netanyahu recently drew renewed attention to the Golan Heights by vowing to forever hold the land Israel captured from Syria in the 1967 war and from which an Israeli withdrawal was once considered key to regional peace.

That same week, Alon and three other cowboys on horseback rounded up some 650 head of cattle during a major Israeli military drill, in which helicopters hovered above and explosions were heard in the distance. Just over the ridge lay the greatest threat of all — the Syrian civil war, which has occasionally sent errant fire onto the Israeli-occupied side of the Golan.

The cowboys dismiss the Syrian fighting as background noise and believe Netanyahu was merely stating the obvious — that they aren’t going anywhere. But the small brotherhood of about 100 cowboys who are responsible for raising the primary source of Israeli beef acknowledge they face a set of unique challenges.

For starters, they operate on a relatively small patch of land mostly made up of nature reserves and military grounds, so everything they do has to be coordinated with authorities. In summer, their primary role is that of firefighters, putting out blazes caused by negligent hikers and military maneuvers. They’ve had to euthanize cows that had limbs blown off by stepping on mines, and in last month’s cattle drive one cowboy had to physically block a gap in a military base’s busted fence to prevent cows from roaming inside.

“Sometimes you can’t even focus on the cows because you are so busy with everything else going on,” said Shay Zerbib, 43, who has previously worked on ranches in Texas and New Mexico.

For Wafiq Ajami, a 54-year-old Druze cowboy who lives along the Syrian border, the fighting there is far more personal. He has relatives on the other side, and has had to save his own cattle from spillover fire.

“At first I thought it was arson, and I yelled out ‘someone is setting fire to the field,'” he recalled. “Then all of the sudden I saw the mortars landing.”