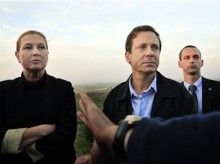 Isaac Herzog, right, and Tzipi Livni listen during a tour along the Israel and Gaza Strip border. (AP Photo/Tsafrir Abayov)

JERUSALEM (AP) — When Prime Minister Benjamin Netanyahu dissolved his unwieldy coalition and called new elections last month, he appeared almost certain to be returned once more to office. But a new center-left alliance has surged past his Likud party in the polls, turning the March 17 contest into a toss-up.

After joining forces with former Foreign Minister Tzipi Livni to create a joint grouping they call “The Zionist Camp,” Labor Party leader Isaac Herzog is looking, to increasingly many Israelis, like a viable alternative to Netanyahu. He promises to reverse the country’s slide toward international isolation and corrosive social inequality.

Much of the Israeli public has tired of Netanyahu’s lengthy rule, but many still see him as the most suitable person to fill the top job. Herzog and Livni have chipped away at this sense of Netanyahu inevitability by embracing some nationalist terminology, drafting high-profile parliamentary candidates and fomenting a snowballing sense that they might actually win.

Part of the strategy is an agreement that they would split a four-year term, with Herzog stepping aside for Livni halfway through. Few in Israel expect this to happen — there is essentially no chance for any one party to win a full majority in parliament, and coalition partners would likely then demand their own turn at a “rotation.” Yet the two-versus-one narrative, polls suggest, has bred momentum.

“It’s either him, or us,” their campaign slogan reads.

Polls consistently show the joint slate formed by Herzog’s Labor and Livni’s Hatnuah leading Netanyahu’s Likud by several seats. Netanyahu may still enjoy an edge when it comes to cobbling together a coalition, thanks to nationalist and religious allies. But with several centrist wild cards in the mix, as well as individuals with personal grudges against the incumbent, matters seem more wide-open than before.

Even the ultra-Orthodox Jewish parties, traditionally among Netanyahu’s most loyal partners, have said they would consider joining a government headed by Herzog.

Herzog and Livni recently added respected economist Manuel Trajtenberg as their prospective finance minister and Amos Yadlin, a retired general who now heads a prestigious think-tank, to be their future defense minister.

With the added firepower, Herzog has been closing the gap with Netanyahu over who the public sees as most suitable to be prime minister, said pollster Mina Zemach. “The whole is greater than the sum of its parts,” she said of his merger with Livni. “The main result of the move is that it created hope.”

A recent survey conducted by the Panels Politics Polling Institute found that only 38 percent of Israelis wanted Netanyahu as their next prime minister. The poll surveyed 508 people and had a margin of error of 4.5 percentage points.

But even without a solid majority, Netanyahu still enjoys a “plurality” among the Israeli public, and the complexities of Israeli politics will complicate any effort to unseat him, said Gideon Rahat, a political scientist at Jerusalem’s Hebrew University. He said the Israeli political system is so fractured that the next government will likely not be the product of the vote itself but rather the political machinations that follow.

Herzog and Livni have gotten a boost by renaming their joint list “The Zionist Camp” in an attempt to reclaim a label that in recent years has been brandished by the right.

The argument has been that Netanyahu’s Jewish settlement policies, in perpetuating Israel’s rule over millions of Palestinians, are risking the country’s Jewish majority. Considering that Zionism aimed at establishing a Jewish state, they argue, the true Zionist would seek a pullout from the West Bank, as Herzog and Livni do.

The move risks alienating Israel’s Arab minority, but could draw critical votes from the Jewish center.

“The right for many years has been trying to steal the Israeli identity, the Zionist identity,” Labor lawmaker Stav Shaffir told The Associated Press.

The opposition also blames Netanyahu for Israel’s high cost of living and its ever-growing gap between rich and poor, as well as for deteriorating relations with the U.S., Israel’s closest and most important ally.

Netanyahu, in turn, has branded the duo’s slate as “anti-Zionist” and insisted only he could stand up to international pressure and cope with Israel’s myriad of diplomatic and security challenges.

Kalman Gayer, who advised former prime ministers Yitzhak Rabin and Ariel Sharon, said the union between Herzog and Livni was mutually beneficial. Herzog gets leadership credentials from Livni’s past as a foreign minister; Livni, who previously headed the essentially defunct Kadima Party, gets the established political mechanism of the Labor Party, which led Israel for its first 29 years of existence.

“This combination gives each one of them something they didn’t have on their own,” he said.

Herzog, 54, has been a leading lawmaker for a decade and served as a low-level Cabinet minister in a series of governments. But he has often been dismissed as a soft-spoken apparatchik. Becoming prime minister would mark a culmination of a family dynasty that has enjoyed royalty status in the founding Labor Party. His late father, Chaim Herzog, was president of Israel from 1983-93 and was its ambassador to the United Nations. His uncle was legendary Foreign Minister Abba Eban.

“What is happening now is that you don’t see Herzog and Livni as these hapless losers anymore,” said Bradley Burston, a columnist for the liberal Haaretz daily. “The assumption was ‘well, I don’t like Netanyahu, but he is the only possibility,’ and now you don’t hear that as much.”