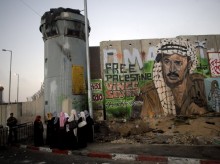 JERUSALEM _ In many ways, Israel is at the forefront of the wall as defense barrier doctrine. It built a 250-kilometer (150-mile) structure that has halted an influx of African migrants across the Egyptian border, as well as a high-tech fence separating the Hamas-ruled Gaza Strip from Israel and Syria from the Israeli-controlled Golan Heights in the north.

But its massive separation barrier that snakes along the frontier with the West Bank is the most symbolic and controversial. Israel began building it in 2002 in what it said was a defensive measure following a wave of deadly suicide bombings that killed more than 1,500 people. But since it juts into parts in the West Bank, which the Palestinians claim as part of their future state, it has been derided as a land grab that poses an obstacle to peace and hampers Palestinian free movement. Israel captured the West Bank in the 1967 Mideast war.

Khalil Tofakji, a Palestinian map expert and former peace negotiator, said the barrier has placed nearly 10 percent of the West Bank on the Israeli side. “If it was for security, the wall could have been built on the internationally recognized borders, the 1967 lines,” he said. “But it’s a political step meant to annex de facto the vital West Bank land to Israel,” he said. He said the huge sums of money Israel invested in construction indicate the project was meant for “the long term.”

Israel rejects the notion and says it can be modified in any future agreement. But protests surrounding it and colorful graffiti on some of its concrete slabs have turned the barrier into a powerful symbol.

Some 550 kilometers (340 miles) out of its planned 726-kilometer (450-mile) route has been completed, with the remaining gaps guarded by troops. Only 5 percent of the barrier is actually a wall, with the rest a three-meter (10-foot) high fence that includes cameras, sensors, robots and software that operate the system. The project cost some 11 billion shekels, or roughly $3 billion.

Dany Tirza, a retired colonel in the military who designed the barrier and is often referred to as “the father of the fence,” said it has been a huge success. He noted that between 2000-2006 there were more than 4,000 attacks in Israel that killed 1,562 people. Since January 2007, when most of the structure was completed, there have been just 35 attacks that have killed 28 people.

“The Palestinians are using the fence for their propaganda, really the fence was only built because of Palestinian terror. It’s not a border. The border will be agreed only on the negotiating table,” he said. “Probably when we will come to the negotiation table the fence will be just a reference and not the line. But the fence is not changing the status of the land.”

Tirza said it was impossible to build the barrier exactly on the pre-1967 armistice line because of the lay of the land. In some places, he noted, it went through mountains and in others through valleys. Some in Israel wanted the barrier built deeper in the West Bank while others wanted it further back in Israel itself, to separate Jewish and Arab citizens. But Tirza said the decision was ultimately made based solely on security concerns.

“My first mission was just to build it as fast as I can and balance it with the rights of the people who live on the ground, that they can get to their agricultural lands, that they can get to their closest cities,” he said. “The leaders of every village know me. I talked with them, I negotiated with them. I tried all the time to find the right balance that people can live with this fence.”

If anything, Tirza says the fence proves that there can be two states for two people, even if the final border does not end up exactly along its line. “The fence is not harming the idea of a two-state solution. It is just a security measure on the ground,” he said.