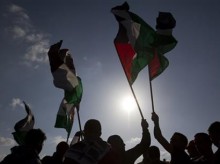 TIRA, Israel (AP) — Facing the threat of rocket fire along with the rest of Israel, residents in this central Israeli Arab town have found themselves caught in the middle between Jewish neighbors and their fellow Palestinians who are dying in growing numbers in the Gaza Strip.

The people of Tira, a town of some 25,000 people known for their warm relations with nearby Jewish communities, have Jewish friends, speak Hebrew fluently and are largely integrated into Israeli society. But with relatives in Gaza and the West Bank, they also empathize with the Palestinians.

That internal strain becomes especially hard during times of violence, and tensions have risen since the latest round of fighting between Israel and Hamas militants began on July 8.

The markets in Tira are usually packed on the weekend with Israeli shoppers. But business has slowed down to a trickle in the weeks since the conflict began, perhaps because Israeli-Arab relations have soured or simply because no one feels like going out in such times, said Mohammed Abdulchai, 52. He said the war has been bad for business, with the fear of rockets shared by everyone.

“The rocket doesn’t know if you are a Jew or an Arab,” he said.

Arab towns are just as vulnerable as those of Jews, perhaps even more so because they have less means of protection. Of the three civilians killed by rocket fire since the war began, one has been a Jew, one has been an Arab and one has been a Thai worker.

Arabs make up about 20 percent of Israel’s 8 million residents and, unlike their Palestinian brethren in the West Bank and Gaza Strip, hold citizenship rights. But they often complain of being treated as second-class citizens. Most don’t serve in the military, which is mandatory for Jews, and many Jews consider them disloyal for sympathizing with the country’s enemies.

The fighting in Gaza has brought the tensions out in the open. Israelis have been outraged by some Israeli Arabs staging pro-Palestinian protests in which they have thrown rocks and blocked streets. Arabs say they have encountered increasing racism and violence from hawkish Israelis as well as calls for Arab businesses to be boycotted and for those who have posted support for Gaza on Facebook to be fired.

More than 1,000 Palestinians, mainly civilians, have been killed and more than 6,000 wounded over the past 19 days, Palestinian health official Ashraf al-Kidra said. Israeli strikes have destroyed hundreds of homes and forced tens of thousands of people to flee, according to Palestinian rights groups.

Israel says it started the military operation and sent ground forces into Gaza to stop the relentless rocket fire and to destroy a sophisticated network of Hamas tunnels that could be used to infiltrate into Israel.

It says it is doing its utmost to prevent civilian casualties, including by sending evacuation warnings to residents in targeted areas, and blames Hamas for putting civilians in harm’s way. Israel has lost 43 soldiers. Israel’s Iron Dome missile defense system has kept the number of casualties from rocket fire low, but air raid sirens are a constant reminder of the threat to Israeli communities.

“What’s happening in Gaza is just pushing us apart and adding fuel to the fire,” said Ahmad Daas, a 27-year-old from Tira. “We don’t want to ruin our good relations with Jews, but on the other hand, emotionally, we are Arabs. It’s only human that we hurt when we see the images from Gaza of people getting killed … war is not the solution.”

He and a group of friends were watching coverage of the fighting on Al-Jazeera, they said, to get a better sense of the carnage in Gaza than they would on Israeli TV.

Mohammed Hamed Abed said he worries both about the safety of an Israeli friend called up to the reserves and Palestinians living in Gaza. He feels a part of Israel and equally targeted by the rocket fire from Gaza. But the 27-year-old said that unlike some Arabs who identified more closely with the Israeli position, he couldn’t accept the alarmingly high number of children being killed and placed the blame on Israel.

“At the end of the day we are Arabs and we are sensitive to this. Those are our brothers in Gaza,” he said. “If they are firing rockets from there it is self-defense.”

Jafar Farah, director of Mossawa, the advocacy center for Arab citizens in Israel, said Israeli Arabs had a particularly hard time because they could see the suffering and growing extremism on both sides.

“What the army is doing in Gaza is just creating more enemies,” he said. “Our identification is not with Hamas, it is with the Palestinian people.”

He said Israelis and Palestinians had to learn to live together and that after all the killing was over they would still come back to the only real formula that could work: an end to occupation and two states living side by side in peace and prosperity.

“I don’t want my Jewish neighbors to live in fear, in sadness and in war,” he said. “I don’t want Hamas to fire rockets and I don’t want to see people killed in Gaza.”

“We are the normal ones here and our message is just stop all of this,” he said.