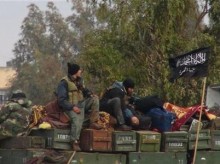 TEL AVIV, Israel (AP) — A sharp increase in the number of al-Qaida linked fighters joining the fight against President Bashar Assad in Syria is threatening to spill over the borders and prompting the Jewish state to re-evaluate its policy of neutrality in the civil war next door, a senior Israeli intelligence official warned on Friday.

The official, who spoke on condition of anonymity because military regulations prevent him from releasing the information, claimed more than 30,000 al-Qaida linked fighters are active in Syria, a huge increase over previous Western estimates. He did not disclose how Israel reached the figure or specify which groups were included in the count, only defining the fighters as believers in “global jihad,” which he said meant a mix of those linked to al-Qaida or inspired by the terror network.

The Israeli official estimated that just two years ago there were only about 2,000 jihadis in Syria but claimed the number has mushroomed to more than 30,000 as the conflict has dragged on, presenting the Middle East with a far more dangerous threat. He claimed that the Islamic rebel groups in Syria currently focused on toppling Assad intend to turn their sites on Israel after dispatching the Syrian government.

“After Assad and after establishing or strengthening their foothold in Syria they are going to move and deflect their effort and attack Israel,” he told The Associated Press.

Israeli officials cite at least two cases of recent rocket fire from Lebanon they attribute to the al-Qaida-linked groups — although independent observers widely interpreted those as an attempt by extremist groups to prompt Israeli strikes on southern Lebanon, where the Assad-allied Lebanese Hezbollah militant group has a strong presence.

Aside from a few airstrikes against what were believed to be advanced weapons shipments from Syria into Lebanon, Israel has kept a low profile since the uprising against Assad began in March 2011, hoping to avoid being dragged into the conflict.

With the absence of any potential ally and any hope that a good resolution could come from the fighting, Israeli conventional wisdom has held that it was better off with it continuing and having the rival forces stay busy butchering each other rather than noticing Israel.

But that may not be the case anymore. “The longer the war in Syria continues, the more jihadists and radicals are coming to this territory,” the official said.

Israel, which borders southwestern Syria, has periodically called for Assad’s ouster, particularly after reports of his use of chemical weapons and other atrocities against civilians. But at the same time it has been wary of saying or doing anything more fearing that any group that supplants him would be a far more dangerous adversary.

“Formally it hasn’t changed,” the high-ranking officer said of Israel’s policy. But, he said, many discussions are taking place behind closed doors about the possibility of rethinking that strategy.

The jihadis currently control most of the Syrian territory that directly borders Israel, although they have not fired rockets or missiles at Israeli territory.

Two al-Qaida-linked groups are known to operate in Syria — Jabhat al-Nusra, also known as Nusra Front, and the Islamic State of Iraq and the Levant. The groups, which have both been designated terrorist organizations by the United States, have been bolstered by the influx of thousands of foreign fighters from across the Muslim world as well as Europe and North America who have flocked to Syria to take up arms against Assad.

Other rebel groups that are generally included in Israel’s definition, including Ahrar al-Sham and Jaish al-Islam, follow an ultraconservative ideology and call for the creation of an Islamic state, but have a more nationalist bent than the al-Qaida-affiliated factions and are not proponents of so-called “global jihad.”

Aron Lund, editor of the Carnegie Endowment’s “Syria in Crisis” website, said the home-grown rebel groups such as Arhar al-Sham and Jaish al-Islam are focused on fighting in Syria and toppling Assad, not staging global attacks.

Lund was also wary of any figures for al-Qaida-linked fighters in Syria, noting the difficulty in accurately determining such numbers amid the blurry lines of the country’s chaotic conflict.

“I don’t even know how you calculate that. Who’s a fighter? Is it anyone with a gun, or is it anyone fighting at the front lines? Is it anyone helping out doing media work and medical work and organization?” he said. “I’m very skeptical of the comparisons that the uprising is X percent this and X percent that.”

To Israel, Assad is a bitter enemy, an ally of Iran and a major backer of Lebanese Hezbollah guerrilla attacks against it. But like his father whom he succeeded as president, he has faithfully observed U.S.-brokered accords that ended the 1973 war with Israel. The Golan Heights frontier has remained quiet for the past 40 years, with only recent instances of cross-border fire disturbing the peace. To this point Israel believes most of the fire against it has been accidental, spillover from internal battles.

The officer said 1,200 fighters belonging to five radical Islamic groups, including three with direct links to al-Qaida and the Nusra Front, were already in the Gaza Strip and have fired rockets at Israel from the Palestinian territory.

He said the infiltration has thus far been largely kept out of Israel and the West Bank, thanks to joint Israeli and Palestinian efforts. But dangers loom on that front too.

Just this week, Israel said it had broken up an al-Qaida plot to bomb the U.S. Embassy in Tel Aviv and major convention center in Jerusalem — the first time Israel explicitly accused the group of being behind an attempted attack. Palestinian security forces recently arrested about 20 young men who allegedly tried to set up an organization of ultraconservative Salafis.

Last November, Israeli forces killed three members of that group in a shootout in the city of Hebron. Israeli security officials say there is some cooperation with their Palestinian counterparts in the West Bank to keep the Salafis under watch.