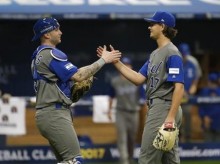 JERUSALEM (AP) — Israel is the big surprise of the World Baseball Classic, upsetting three teams, generating buzz and offering a mascot like no other — “The Mensch on the Bench.”

Back home, no one seems to notice.

Baseball has long been overlooked in Israel, seen as an arcane and boring game. This team consists almost entirely of American pros of Jewish descent. It has been derided as a group of mercenaries with little connection to the country.

Israel entered this showcase tournament ranked 41st in the world, the lowest ranked and last team to qualify. In quick succession, however, the Israelis beat third-ranked South Korea 2-1 in extra innings in the opening game before topping fourth-ranked Taiwan 15-7 and ninth-ranked the Netherlands 4-2 to finish first in Pool A with a 3-0 record.

Next up in the second round is Cuba on Sunday in Tokyo, with a chance to advance to the semifinals.

For the small Israeli baseball community this has been nothing short of astounding, creating a wave of pride in their disparaged sport. The country has only one baseball-specific field and only about 1,000 active players who are well accustomed to fielding incredulous questions from native-born Israelis about their funny gear and the difference between a home run and a strikeout.

Israel’s WBC games haven’t been broadcast on the national sports channel and have been mentioned only briefly in the media. Most Israelis likely aren’t even aware they have a national team or understand it is competing against the world’s best in the sport’s most prestigious global event.

That includes the country’s sport minister. Asked in a radio interview whether she was planning to travel to South Korea, Miri Regev had no idea what was happening there. When pressed, she said she knew a baseball team existed but not much more.

“I may be the sports minister but I don’t pretend to know every player and every team in detail,” she said on Army Radio. “My job is to promote them … Obviously it is not one of the preferred fields that we invest in.”

In Israel, soccer and basketball reign. Baseball has been one of the most popular sports among American Jews, but in Israel it has mostly been the domain of a loyal group of American immigrants.

It failed to catch on with the rough-and-tumble native-born Israelis. When it came to imported American sports, they took more of a liking to the strategy and hard hitting of football. In 2007, a group of American supporters launched the Israel Baseball League, a professional league comprised almost entirely of foreign players. It folded after one season.

Team manager Jerry Weinstein acknowledged that generating more interest in Israel was one of the team’s primary goals.

“That’s what we’re trying to do, help grow the game in Israel,” he told reporters Saturday. “And I think that by playing in this (tournament) and doing well that we enlighten people’s awareness.”

Support has also suffered because the team is, well, not very Israeli. Thanks to the WBC’s “heritage rule,” its players are almost all Americans with major or minor league experiences and varying degrees of ties to Judaism and Israel. The roster includes only two Israeli citizens, both little-used pitchers, and eight of the Americans visited Israel for the first time only two months ago to learn about the country.

“Let’s stop pretending like they really represent Israel because it is doubtful that someone who doesn’t live in a country and has never visited it can truly develop affection toward it,” Guy Leiba wrote in the popular YNet website. “There is no difference between these players and African sprinters who choose to represent Arab countries for a few dollars.”

Even so, a select few have jumped on the bandwagon.

Prime Minister Benjamin Netanyahu, who has a number of American-born aides who have played baseball and softball locally, tweeted a greeting to the team as it mowed through the competition in South Korea.

“We are all with you!” he wrote, with a link to a video showing the players wearing Jewish skullcaps during the playing of the national anthem in Seoul.

The ritual, plus fans sporting “Jew Crew” T-shirts and the mascot with a Yiddish name — “mensch” meaning a responsible person of integrity — has given the team a far more Jewish flavor than Israeli. And that, says sportscaster Gil Barak of Sports 5 TV Channel, makes it even tougher for locals to connect.

Even though he covers sports for a living, Barak said he couldn’t name a single player on the team, and Israelis just couldn’t identify with such a group.

“No one knows anything about the game and this is entirely alien,” he said. “It’s a sport that has no past here, has no future and has no present.”