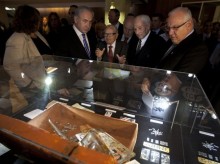 JERUSALEM (AP) — Fifty years after Holocaust mastermind Adolf Eichmann was convicted in an epic trial that helped shape Israel’s national psyche, the Israeli parliament on Monday put on display for the first time dozens of artifacts from the daring 1960 operation in Argentina that captured the Nazi criminal.

The gripping public testimony during the trial by more than 100 Jews who survived torture and deprivation captured world attention and vividly brought to life the horrors of the Holocaust. It also brought to light stories of Jewish bravery and resistance that shattered the myth of Jews meekly walking to their deaths. As a result, more survivors went public with their experiences, which greatly helped research and commemoration efforts.

“We carried out justice, partial, reduced, even minuscule compared to the crime, but of tremendous symbolism and the symbolism is that those who murder millions and those who plan the murder of millions will pay the price,” Prime Minister Benjamin Netanyahu said at the opening of the exhibit. “The capture and the bringing to trial of Eichmann was a turning point in which the state of Israel and the Jewish people began carrying out justice against their tormentors.”

Known as the “architect of the Holocaust” for his role in coordinating the Nazi genocide policy, Eichmann fled Germany after World War II and assumed the name Ricardo Klement in Argentina. He was hunted down and captured by Israeli Mossad agents in an operation that remains one of the most defining episodes in the country’s turbulent history. Eichmann was hanged after his 1961 trial in Jerusalem.

The exhibit, which will be on display in parliament for three weeks before moving to a Tel Aviv museum, showcases items that had been classified and stashed away for decades: the cameras used by Mossad agents to track Eichmann, the briefcase in which they carried fake license plates, the keys to Eichmann’s Buenos Aires apartment and the forged Israeli passport – with the alias Zeev Zichroni – his captors used to smuggle him out of Argentina.

There are also original photos, documents and the gloves used to nab Eichmann, as well as personal effects found on Eichmann’s body – a comb, a pocket knife and a plastic cigarette holder.

The agents who participated in the operation slipped into Argentina as part of an official Israeli delegation that arrived for Argentina’s 150th anniversary celebrations, said Neomi Izhar, the exhibit’s historian.

Rafi Eitan, who headed the operation, said he identified Eichmann by searching his body for distinctive scars on his arm and stomach.

During the 1961 trial, Eichmann sat on a wooden chair inside a bulletproof glass booth – also on display in parliament -and calmly listened to the testimonies of Holocaust survivors.

Eichmann’s defense was that he was merely following orders. Covering the trial for The New Yorker, the political theorist Hannah Arendt famously coined the phrase “the banality of evil” to describe Eichmann.

Six million Jews were killed by the German Nazis and their collaborators during World War II, many of them following Eichmann’s blueprint drawn up for liquidating the entire Jewish population of Europe.

Eichmann was convicted in December 1961 of war crimes and crimes against humanity. He was hanged the following year – the only time Israel has carried out a death sentence.

Until they heard the public testimony of Jews who survived torture and deprivation, many Israelis looked down on the survivors as weak victims, at odds with the macho image of the “new Jew” of Israel. The emotional descriptions of the horrors they survived changed the perception for many Israelis and allowed more survivors to go public.