Israel prepares for next war with Hezbollah in mock village By Aron Heller | Military/Security, Thursday, 30 Mar 2017 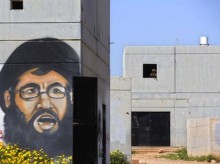 An Israeli soldier looks out a window during a drill at an Army base near Elyakim, Israel. (AP Photo/Sebastian Scheiner)

ELYAKIM MILITARY BASE, Israel (AP) — Between a collection of concrete buildings with Arabic graffiti that are designed to simulate a typical Lebanese village, dozens of Israeli officers are gearing up for their next battle with Hezbollah guerrillas.

It’s a mission the Israeli military has focused on intensely in the decade since it fought an inconclusive month-long war with the Iranian-backed group. But this drill at a base in northern Israel takes on added significance in the wake of rising tensions between the old adversaries. The friction includes a rare clash along the Syrian border this month in which Israel shot down an anti-aircraft missile fired at its planes as they were carrying out an airstrike on a suspected Hezbollah weapons convoy from Syria to Lebanon.

In the past month alone, Hezbollah’s chief Hassan Nasrallah has also threatened to strike Israel’s nuclear facilities if Israel were to attack, and Israel has detailed a contingency plan to evacuate up to a quarter-million civilians from border communities to protect them from attacks from Hamas, Hezbollah or other Islamic militant groups. In another sign of the escalating feud, Israel’s military chief, Lt. Gen. Gadi Eisenkot, revealed intelligence that Hezbollah’s top military commander was killed in Syria in May 2016 by rivals within the group — perhaps even on orders from Nasrallah himself.

Though officers taking part in the drill insisted their training was business as usual, the backdrop clearly offered a reminder of what could await.

“We are trying to give the commanders and the soldiers the environment that looks like the real war so that they can have the feeling, when they will have to go to war, they will feel that they did it before. This is the purpose of the training — to prepare for the real thing,” said Col. Kobi Valer, commander of the Elyakim Military Base in northern Israel. “The forces need to know that this could be their last training before the war.”

Hezbollah fired more than 4,000 rockets on Israeli communities in the 2006 war, while Israel bombarded targets in southern Lebanon. The month of fighting killed an estimated 1,200 Lebanese, most of them civilians, as well as 44 Israeli civilians and 121 Israeli soldiers.

The Israeli airstrikes caused massive destruction to residential areas in south Lebanon and south of Beirut — areas where Hezbollah maintains a presence and has large support among the predominantly Shiite population. They also flattened entire blocs of residential apartments and destroyed roads, bridges, ports and power plants across the country.

Despite its military superiority, Israel ended the monthlong war with a feeling that it had not delivered the crushing blow it had sought. A commission of inquiry found the military to be inadequately prepared for the battle, which broke out after Hezbollah carried out a surprise cross-border attack and captured two Israeli soldiers, and many troops acknowledged that they had underestimated Hezbollah’s capabilities.

Still, the war was credited with re-establishing Israel’s deterrence and ensuring more than a decade of calm on the northern front.

In recent years, Hezbollah has been bogged down in Syria’s civil war fighting in support of President Bashar Assad, where the group has suffered heavy casualties.

Although Nasrallah appears to be in no rush to resume hostilities with Israel, his group has gained valuable battle experience that has worried Israel, which says Hezbollah has significantly built up its weapons stockpile since 2006 and upgraded its arsenal to about 150,000 missiles, including longer range and guided systems capable of striking anywhere in Israel.

Israel has repeatedly stated it will act to prevent Hezbollah getting advanced munitions and is widely believed to have carried out several airstrikes in recent years on weapons convoys destined for the militant group. Just recently, it made a rare admission of such a strike after Syria fired missiles at its jets. Still, Israel fears some advanced weapons like surface-to-sea weapons or anti-aircraft missiles might already have reached Hezbollah.

Israel, meanwhile, has been building up its missile defenses. A system called “David’s Sling” to intercept medium-range missiles from Hezbollah is due to become operational in early April. That would mark the completion of a multilayer missile defense system that includes “Iron Dome” for short range rockets and “Arrow,” designed to intercept long-range ballistic missiles high in the stratosphere.

Israeli intelligence does not believe Hezbollah is interested in sparking war this year, but an unplanned escalation as a result of all the developments could happen.

In the mock village in Elyakim, the reserve officers focused on the type of urban warfare that their comrades struggled with in 2006.

“All of this facility is meant to give us a more realistic feeling,” said Capt. Ofek Sinai, a 26-year-old reserve platoon commander. “Undoubtedly, doing this a few weeks every year makes people more confident about fighting in a real war.”