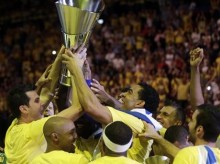 TEL AVIV, Israel (AP) — More than 20,000 Maccabi Tel Aviv fans thronged a central square in the Israeli city on Monday to celebrate the team’s stunning victory in the European basketball championship, capping a national outpouring of joy that went far beyond the boundaries of sports.

The upset victory over Real Madrid was the talk of the town Monday, appearing on the front pages of newspapers, topping newscasts throughout the day and attracting the attention of the country’s leaders. Hundreds of fans greeted the players at the airport, running through the terminal to get a glimpse of the players in a mad rush broadcast on live TV, and a giddy Prime Minister Benjamin Netanyahu shuffled his schedule to meet the team.

The country’s major TV stations all carried live broadcasts from Monday’s celebration in Rabin Square, where, the previous night, jubilant fans jumped into its landmark water fountain in a spontaneous show of joy.

“Amazing the support Israel is giving us. Feels like we brought together an entire country,” tweeted Sylven Landesberg, a U.S.-born guard on the team.

The gathering turned the square into a sea of yellow, with fans waving team flags and Israeli flags as loud music played in the background.

Members of the team raised their trophy on stage in front of the cheering crowd of more than 20,000 fans as fireworks lit up the sky in celebration Monday night.

A nation of 8 million, Israel still has a small-town feel to it when it comes to its international sporting successes. While jubilant celebrations from Maccabi’s die-hard fan base were to be expected, the national celebration reflected the type of patriotic fervor rarely seen around other professional sports clubs.

Netanyahu put his busy schedule on hold Monday to meet the team, hugging the coach while players took selfies with the prime minister. Netanyahu joked with the players and proudly showed a tie with the team’s blue and white colors.

Earlier, upon greeting visiting Chinese Vice Premier Liu Yandong, Netanyahu informed her that “you’ve come to something of a national holiday because yesterday we proudly saw the victory of Maccabi Tel Aviv basketball team for the European championship, so this is a time of great celebration.”

Maccabi Tel Aviv has long been a source of national pride, even as its player base has become less and less Israeli.

Maccabi has seven Americans who played at U.S. colleges, and only two Israel-born players are part of the regular rotation. Their foreign players, including former Boston College guard Tyrese Rice, former UNC Greensboro point guard Ricky Hickman and former University of Virginia forward Devin Smith, were instrumental in Sunday’s victory. Another trio of American basketball players with ties to Judaism play as Israelis.

The high concentration of foreigners has drawn accusations from rivals that the team is comprised of mercenaries with very little to do with the country.

The team has dominated Israeli basketball for decades and has grown into a European powerhouse, winning five titles. But in recent years, its aura has begun to fade.

Last year, it lost the Israeli title for the third time in six years — after having lost it only once in the previous 39 — and entered the European championship as a huge underdog.

In contrast, this year’s team was devoid of big stars. It needed a dramatic win on the road to even make it to the Final Four and its victories over heavily favored CSKA Moscow in the semifinals and Real Madrid in the final were sparked by the outstanding play of its bench.

“No one believed in us,” Maccabi captain Guy Pnini said.