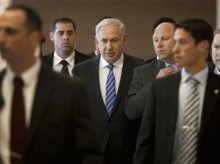 The gambit reflected the confidence of a leader who — while at loggerheads with the Palestinians, a region in turmoil and much of the world — is riding high, for now, at home. Polls show Likud running ahead of all other parties and Netanyahu to be the public’s top choice for prime minister.

Netanyahu had to weather a summer of protests over rising living costs, but in recent months he has been buoyed by a perceived strong stance against Palestinian efforts to gain recognition as a state at the United Nations and by success in securing the release of a captive Israeli soldier in a lopsided prisoner swap with militants.

Under these circumstances he seems assured of victory in the Jan. 31 primary, which comes a year ahead of schedule.

Netanyahu, who was also prime minister from 1996-1999, has been in office for two and a half years and general elections must be held by November 2013.

But in the tumultuous world of Israeli politics, coalition governments rarely last their full terms. Netanyahu’s nationalist-dominated coalition could crumble in the coming months due to a number of factors, from deadlock in Mideast peace efforts to scandals threatening two major coalition partners.

Netanyahu told Likud lawmakers Monday that holding the Likud vote in less than two months will save the party money in a shortened campaign and allow it to face events with a united front. “It is important that … we will continue to be ready to deal with the great challenges we are facing,” he said.

Netanyahu began his term by dropping his opposition to Palestinian statehood in what amounted to a startling about-face for a politician who built his career on standing firm in the face of Palestinian demands.

But efforts at relaunching peace talks never seriously took off, and Netanyahu has clashed with the international community over his insistence on continued Jewish settlement construction in the West Bank.

Although that position is controversial among Israelis, Netanyahu has won points with the public by presiding over a period devoid of major violence — and by taking a tough stance against Iran’s nuclear ambitions.

In such a climate, Netanyahu is unlikely to face a serious challenge.

“His main reason for doing this is to catch his potential opponents with their pants down,” said Avraham Diskin, a political scientist at Jerusalem’s Hebrew University. “He’s taking advantage of an opportunity.”

Culture Minister Limor Livnat, a Likud ally of Netanyahu’s, said there were no plans for an early general election.

But that may be out of Netanyahu’s hands. In coming weeks, his government faces a potential damning report of its handling of a deadly forest fire a year ago that may force the resignation of his interior minister, Eli Yishai. That could lead Yishai’s powerful Shas party to bolt the coalition.

And a decision is also expected soon on whether Foreign Minister Avigdor Lieberman will be indicted on corruption charges. That too could jeopardize Netanyahu’s government, if Lieberman then pulls his Yisrael Beiteinu out of the coalition.

The attorney general’s office said a hearing in which lieberman is to defend himself against corruption allegations is tentatively set for Dec. 18. A final decision on an indictment would follow, though it is unclear when.

Yisrael Beiteinu has 15 seats and Shas has 11. The loss of either party would rob Netanyahu of a majority in the 120-seat parliament.

Netanyahu also faces potential rebellion in his right-wing flank if he carries out the planned March evacuation of an illegally built settlement outpost in the West Bank.

Also in the mix is the Labor Party, which recently elected as its head Shelly Yachimovich, a former journalist whose ascent appears to have rejuvenated the once-dominant grouping.

Polls currently show the Likud to be well ahead of all other challengers.