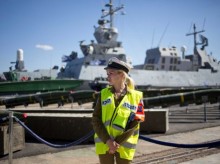 An Israeli military policewoman stands in front of a display of the seized rockets. (AP Photos/Ariel Schalit)

EILAT, Israel (AP) — Israel’s prime minister on Monday triumphantly toured a display of dozens of rockets that navy commandos intercepted in the Red Sea last week, alleged to be on their way from Iran to the Gaza Strip, and accused the international community of ignoring Iranian support for militant groups and falling victim to a charm offensive by the new leadership in Tehran.

Benjamin Netanyahu’s visit to this Red Sea port capped a six-day PR blitz aimed at persuading world powers to toughen their position in nuclear talks. So far, the international reaction has been subdued, illustrating the uphill battle the Israeli leader faces in his efforts to change the minds of world leaders about Iran’s outreach to the West.

“There are those who would prefer that we not hold this news conference here today, they feel uncomfortable that we show what is really happening inside Iran,” Netanyahu said. He spoke to a backdrop of the captured ship and the Israeli vessels involved in the operation along with the Israeli defense minister.

“Iran, a brutal regime, has not abandoned its deep involvement in terrorism, its systematic efforts to undermine peace and security throughout the Middle East and its ambition to destroy the state of Israel,” Netanyahu said. “What is new is not Iran’s deeds or its lies, but the desire of many in the international community to bury their heads in the sand.”

The tough comments threatened to further strain Netanyahu’s already tense relations with the European Union and the White House.

State Department spokeswoman Jen Psaki told reporters in Washington that the U.S. is concerned about Iran’s support for militants but that it is still focused on resolving the nuclear issue.

“There are remaining concerns we have about their terrorist activities, about — or activities tied to terrorism, including the transfer, of course, of weapons, and — as well as human rights abuses, and we’ll continue to hold them accountable,” she said.

Israel believes that Iran is trying to build a nuclear weapon, saying a nuclear-armed Iran would pose a threat to the existence of the Jewish state, citing Iranian calls for Israel’s destruction, its development of long-range missiles and its support for hostile militant groups on Israel’s borders. Iran denies that it is pursuing weapons technology.

Netanyahu has been an outspoken critic of the efforts by six world powers to negotiate a deal with Iran that would substantially scale back its nuclear program in exchange for ending international sanctions. He says a current, interim deal gives Iran too much relief while getting little in return, and fears a final agreement would leave the Islamic Republic with the capability to make a bomb.

Since last Wednesday’s naval raid, Netanyahu has done his utmost to use persuade the world that the shipment revealed the “true face” of Iran.

As the raid was announced, the military released slick video presentations illustrating the circuitous 5,000-mile (8,000 kilometer) route the weapons had been meant to take — starting in Syria, then to Iran and Iraq before heading toward Sudan and overland to Gaza — along with clips showing naval commandos discovering the rockets far out at sea.

The government gave a hero’s welcome to the returning commandos and released more videos when the seized ship, the KLOS C, arrived in Eilat over the weekend. To help ensure heavy coverage of Monday’s event, the government organized a special flight for the media to make the trip to Eilat, a four-hour drive along treacherous, narrow roads from Jerusalem and Tel Aviv.

After the news conference, Netanyahu got on the bus carrying reporters and thanked them for covering the event.

Dozens of the green rockets were displayed on metal stands behind a podium where Netanyahu spoke. Stacks of bullets and plastic-wrapped mortar rounds lay nearby.

A military officer who greeted Netanyahu showed him what he said was a fraudulent bill of lading and other evidence he said linked the ship to Iran. Sacks of cement on the ship said “Made in I.R. Iran,” and metal seals on the cargo appear to have been inspected by Iranian custom officials before they were loaded on the Panama-flagged KLOS C vessel.

“The weapons on this ship were destined for terrorists in Gaza who are committed to Israel’s destruction. The goal was to have these weapons rain down on the heads of Israel’s citizens,” Netanyahu said. “The ship was organized by Iran, dispatched by Iran, financed by Iran. The missiles were loaded by Iran in Iran.”

Iran has denied any connection to the shipment and accused Netanyahu of staging the raid, which took place while he was in the U.S., to derail Tehran’s improving relations with the West. The ruling Hamas militant group in Gaza, and the smaller Islamic Jihad, which has close ties with Iran, have also said they were not connected to the weapons.

Strategically, it also is not clear how significant the rockets were. While Israel nabbed a total of 40 rockets, militants in Gaza already possess thousands of such weapons, including locally made devices capable of reaching the major cities of Jerusalem and Tel Aviv, some 50 miles (80 kilometers) north of Gaza.

But Israeli officials say the Syrian-made M-302 rockets would have been a significant upgrade, with a longer range of 100 miles (160 kilometers) that would put some 5 million of its citizens in range. They also carry a much larger payload than the current arsenal in Gaza.

It’s also unclear how the rockets would have made their way into Gaza. The coastal territory is under Israeli blockade.

The land route that Israel says is used to deliver rockets, from Sudan through Egypt and into Gaza through smuggling tunnels, is no longer a viable option. Since staging a coup last July, Egypt’s military government has cracked down on Hamas and shuttered virtually all of the smuggling tunnels, according to Hamas officials. In previous smuggling attempts, rockets have been taken apart and moved into Gaza in bits and pieces.

But for Israel, the main goal of the operation appears to be halting what leaders deride as the “charm offensive” of Iran’s new president, Hassan Rouhani. For now, the media blitz has yet to have the desired impact.

On Sunday, the European Union’s foreign policy chief, Catherine Ashton, was in Iran for meetings with officials about the nuclear talks. While Ashton was in Iran, Netanyahu urged her to raise the issue of the seized rockets with the Iranian leadership. But the issue apparently did not play a prominent role.

When asked whether the topic had been raised, Michael Mann, a spokesman for Ashton, said “not that I’m aware of.” He noted, however, that he had not taken part “in all the meetings” with Ashton.

A Western diplomat connected to the nuclear talks in Geneva said the Israelis regularly lobby the four Western nations involved in the talks, demanding a halt to all enrichment of uranium and the closure of Iran’s plutonium facility. He said that while the Israelis have a right to be heard, their demands are “unrealistic.” The diplomat, speaking on condition of anonymity because he was discussing delicate international negotiations, said Israel’s discovery of the rockets has had “zero impact” on the talks.

Netanyahu said the world’s indifference to the naval raid was “hypocritical,” and he lashed out at Western leaders for condemning Israeli settlement construction in east Jerusalem while ignoring Iran’s transgressions.

“This is not only farcical. It is dangerous because the willingness to ignore Iran’s real policies is highly irresponsible,” he said. “Those engaged in self-deception must awaken from their slumber.”