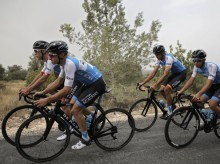 JERUSALEM (AP) — Of the 22 teams competing in this year’s Giro d’Italia, the Israel Cycling Academy squad has perhaps the most at stake.

Israel’s first pro cycling team is the event’s undoubted underdog. And while team officials say they hope to win a stage or two, their ultimate goal is far loftier — to parlay their maiden participation in the historic hosting of a Grand Tour event start into a launching pad for cycling to become the country’s national sport.

The team, established less than four years ago, received one of the four wild-card invitations by race organizers — ahead of some far more established squads. They will race with the 18 Pro Tour teams that get automatic entry into an event that is second only to the Tour de France in prestige.

“This would have been literally unthinkable just a few years ago,” said Ran Margaliot, the team’s 30-year-old manager. “We had this ‘start-up’ idea of penetrating the national consciousness as quickly as possible.”

Margaliot was motivated to spark a grassroots movement following his own crushed dreams of becoming a world-class rider. While bike riding is a popular Israeli hobby, competitive cycling has been mostly an afterthought amid a sporting landscape dominated by soccer, basketball and judo.

The team is co-owned by Sylvan Adams, a Canadian-Israeli cycling enthusiast responsible for bringing the Giro to Israel, who is also building the Middle East’s first Olympic Velodrome in Tel Aviv as part of his efforts to revolutionize the sport in the country. For him, the team has a far more important goal than merely being competitive. He said it offers a chance to be ambassadors for the sport in Israel and ambassadors for Israel to the world.

The team is also unique in the cycling world since it relies primarily on philanthropic funding. It says it has its eyes set on making the Spanish Vuelta next year and the Tour de France in 2020. But first it hopes for a respectable showing in Israel’s hosting of the first three stages of the Giro, held outside Europe for the first time.

The ICA team’s best cyclists are 31-year-old Ben Hermans of Belgium and 38-year-old Reuben Plaza of Spain, who has previously won stages in both the Vuelta and the Tour. In all, it is made up of 24 riders from 16 countries, including five Israelis, two of whom will race in the Giro.

The multiethnic makeup looked to boost the team’s image as a melting pot for cyclists and project an image of “normalcy” to the world. But that took a blow when, under severe anti-Israeli pressure in his home country, a Turkish member of the team was forced to quit.

Team member Guy Niv, a former soldier in an elite military unit who transitioned from mountain biking only a year ago, said his goal was to make it to the finish line in Rome so Israel’s budding young cyclists would have the kind of role model to look up to that he didn’t have as a kid.

“I hope we look back in a few years at the Giro as a turning point for the sport in Israel,” he said. “We hope the Giro will change the culture of Israeli cycling.”

To highlight their underdog status, the team held one of its last training sessions before the Giro in the Elah Valley near Jerusalem, overlooking what is believed to be the spot of the biblical battle of David versus Goliath.

Margaliot said it was symbolic regardless of how the team fares.

“This is the place where all Israeli riders come to train and climb. That’s where our Israelis riding in the Giro, Guy Sagiv and Guy Niv, started out racing, so for us it’s coming full circle,” Margaliot said. “Here we are on the verge of Israel’s greatest cycling moment.”