In new row, Israel at odds with US over visas By Aron Heller | Associated Press, Friday, 28 Mar 2014 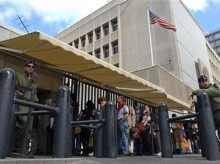 An Israeli border policemen guards the U.S. Embassy in Tel Aviv as other Israelis line up for U.S. visas. (AP Photo/Eitan Hess-Ashkenazi, File)

TEL AVIV, Israel (AP) — With the United States irked at Israel over its settlement policies and the lack of progress in peace talks, an obscure diplomatic classification has emerged as a new sticking point between the two close allies.

To ease the travel of its citizens, Israel is pressing to join 38 other countries in the U.S. Visa Waiver Program — a prestigious club of nations whose citizens don’t need a preapproved visa to visit America. So far, their efforts have not only been rebuffed, but Israel has seen a spike in the number of young people and military officers rejected entry to the U.S.

Washington says Israel has not been let into the program simply because it has not met the requirements — and has pointed in part to Israel’s treatment of Arab-American travelers, drawing sharp denials by Israeli officials of any discrimination. U.S. officials say there is no policy in place to make it more difficult for Israelis to get “B” visas, which allow a 90-day stay in the United States for business or travel purposes.

Figures show that the percentage of Israelis whose visa requests are rejected is lower than that of many other countries, and other countries’ rejection rates have grown as well amid an overall stricter approach taken by American Homeland Security officials. For example, in 2013 Belarus had a rejected rate of 20.7 percent, Bulgaria’s was 19.9 percent and Ireland’s was 16.9 percent.

Even so, Israel saw its visa rejection rate jumped to 9.7 percent last year, up from 5.4 percent the year before — a startling 80 percent increase.

Sen. Charles Schumer, a New York Democrat, has called on the State Department to “end its widespread, arbitrary practice of denying young Israelis tourist visas.” Other pro-Israel members of Congress have also pressed for answers. Israel’s Deputy Foreign Minister Zeev Elkin said some Congress members are pushing for legislation that would exempt Israel from the requirements to qualify for the waiver program altogether.

The 90-day visas are either approved or rejected after a brief interview with a U.S. embassy official in the applicant’s country of origin. Americans do not need a visa to enter Israel, though Americans of Palestinian origin often face problems and cannot enter through Israel’s Ben Gurion International Airport, instead entering either through Jordan or Egypt.

The visa issue brings another irritant in U.S.-Israeli ties at a time of strains over Secretary of State John Kerry’s stagnating peace efforts. The Obama administration has been critical of Israel for continuing to press forward with Jewish settlements in the West Bank while Kerry has been brokering peace talks over a future Palestinian state.

Israeli Defense Minister Moshe Yaalon recently called Kerry “obsessive” and “messianic” over making peace between Israelis and Palestinians and dismissed a U.S. security plan for the region as worthless. He also called the U.S. weak when it comes to its stance on Iran’s nuclear program and questioned Washington’s commitment to Israel’s security.

During the same briefing last week, Psaki said the U.S. was disappointed that Yaalon has yet to apologize for his “offensive” remarks.

Among younger Israelis, the visa issue has put a damper on plans for a post-army trip to America, a common rite of passage after completing three or more years of compulsory military service. For this demographic, the American concern appears to be less a matter of security and rather a fear that they will abuse their tourist visas to work illegally and peddle products at malls.

Yoav Rosenbaum, 23, said he had no such intention. He and three friends just wanted to go on a 10-day trip to the New York area to see a comedy festival. But even though he holds down a hi-tech job, rents an apartment in Tel Aviv and lived in the U.S for the three years when he was younger, he was immediately rejected at the American embassy.

“I brought documents, showed my return flight and the tickets to the festival, paid the fee and the guy just looked at me and said ‘it’s not going to happen,'” he recalled, saying the official told him he didn’t have enough ties to Israel to be trusted to return. “I wasn’t that shocked because I knew that they give a hard time to people of my age group.”

It hasn’t stopped dozens of others from lining up outside the American embassy in Tel Aviv to seek visas on a daily basis.

For the Israeli government, the larger issue is membership in the Visa Waiver Program.

As one of America’s closest allies, Israel wonders why countries like Slovakia, Iceland and Latvia qualify while they are left out.

U.S. diplomats say it is merely a matter of countries meeting stringent conditions, such as issuing biometric passports, properly reporting lost or stolen documents and allowing the free access of Americans into their country.

Psaki said American authorities “remain concerned with the unequal treatment that Palestinian Americans and other Americans of Middle Eastern origin experience at Israel’s border and checkpoints, and reciprocity is the most basic condition of the Visa Waiver Program.”

He told The Associated Press that Israel had addressed all matters under its control to be able to qualify for the program. He said it will now allow Palestinian-Americans to begin entering the country through the airport.

The only obstacle remaining was the rate of Israelis rejected for U.S. visas, which needs to drop below 3 percent before Israel can be considered for the program.

“That depends on the Americans. If they wanted, a creative solution could be found,” Elkin said. “Israel is among the friendliest countries to the U.S. and there is no reason why we shouldn’t be part of the program.”