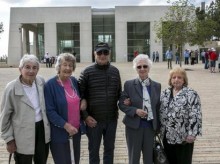 Passengers from the 1939 SS St. Louis trans-Atlantic ship, pose for a photograph during a visit to the Yad Vashem Holocaust memorial in Jerusalem (AP Photo/Olivier Fitoussi)

JERUSALEM (AP) — While the European refugee crisis has captured the world’s attention, Sol Messinger is one of the few who can personally relate to the harrowing images of desperate families fleeing to safety by sea.

The 84-year-old retired pathologist from Buffalo was aboard the SS St. Louis, the famed trans-Atlantic liner carrying nearly 1,000 Jewish refugees from Germany in 1939 that was rejected by the United States and Cuba and forced to return to Europe. More than a quarter of the passengers ultimately perished in Nazi death camps and the ship’s saga became a symbol of Western indifference toward the victims of Nazi persecution.

Messinger, who eventually escaped from a French detention camp along with his parents, is among a half-dozen surviving passengers who are in Israel to reflect on their pasts and discuss what can be learned from their experience to cope with the influx of refugees escaping conflicts in Syria, Iraq and elsewhere.

“They are being driven out in a great sense like we were driven out and they also have very few places to go to,” he said after a conference Wednesday on the topic at Hebrew University. “It’s an outrage that things like this can still happen in our world.”

On May 13, 1939, the St. Louis set sail from Hamburg, Germany, for Havana with 937 passengers on board, nearly all German Jews fleeing the Third Reich in the wake of the Kristallnacht pogroms against them. Long before Adolf Hitler plotted the destruction of European Jews, he pushed for their expulsion. The St. Louis offered a powerful propaganda tool, showing that no one else wanted them either — a move some historians conclude emboldened Hitler to push for their annihilation instead.

The ship anchored at sea near Havana, where relatives waited to greet passengers, but was not allowed to dock. After Cuba rejected nearly all the passengers, and one of them slit his wrists and jumped overboard in despair, the St. Louis sailed north toward Florida, getting close enough to Miami to see its palm trees and lights. For three days it lingered as passengers cabled President Franklin D. Roosevelt, begging for refuge and Jewish advocates waged a high-profile campaign on their behalf.

After they were turned away, the ship’s German captain, Gustav Schroeder, stalled on the return voyage, refusing to return to Germany until he had secured his passengers a safe haven. While at sea, an agreement was reached to disperse them among England, Belgium, Holland and France. Still, 254 eventually died in Nazi death camps. In all, 6 million Jews were killed in the Holocaust.

The affair was later adapted into the film “Voyage of the Damned,” and the SS St. Louis Legacy Project, which documented the history of the voyage and arranged this week’s conference, successfully pushed for an apology from the U.S. State Department.

Rebecca Kobrin, a history professor at Columbia University, said parallels could be drawn between the Jewish refugee crisis of the last century and the current migrant crisis, noting the same terminology of a “Trojan Horse” was used to describe their perceived danger. Then, the displaced Jews invoked an unfounded fear of communism, while today the Arabs invoke a fear of terrorism, she said.

“The refugees today, who no one wants, their future is unknown,” she said. “The message is that when refugees are given a chance they contribute to the societies that absorb them.”

Not all of the St. Louis passengers accept the comparison. Gisela Feldman, a 93-year-old former passenger from Manchester, England, said there were important differences between Nazi-era Jews and today’s migrants.

She said the Jews, who were fleeing religious persecution and near-certain death, posed a threat to no one, while many of today’s migrants were merely seeking economic opportunities. She also warned that the huge numbers of today’s refugee crisis have already created an anti-immigrant backlash that contributed to Brexit and the rise of Donald Trump.

“The refugees from Hitler were in danger for their lives,” she said.

Scott Miller, of the United States Holocaust Memorial Museum in Washington, said American policy leading up to World War II was particularly intransigent. He said most of the St. Louis passengers were on waiting lists for entry permits, but the U.S. would not let them in early. The St. Louis’ legacy is that “there are individual consequences to a less than generous refugee policy in a time of crisis,” he said.

Messinger, an only child who turned 7 while on the ship, recalls speaking through a porthole to his relatives, who had come from America to greet them in Havana, his mother tossing them a bar of German chocolate and lamenting that “at least that made it.” Later, he said he stood against the railing of the upper deck with his father looking out toward South Beach — a memory that still makes him emotional every time he visits Miami.

Messinger and his parents made it to New York in 1942. He said he tries to avoid politics when speaking of refugees and he hopes authorities will do the same.

“Try to treat immigrants as family if at all possible, and try to do for them what you would do for your family,” he said. “Because, in effect, all human beings really are family.”