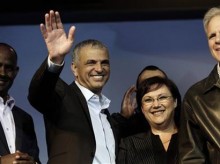 TEL AVIV, Israel (AP) — The new kingmaker of Israeli politics grew up in a hardscrabble town in northern Israel, one of seven children of Libyan Jewish immigrants, and worked stints as a fisherman and fruit vendor before becoming a working class hero in politics.

With TV exit polls indicating Prime Minister Benjamin Netanyahu’s hard-line Likud and Isaac Herzog’s center-left Zionist Union deadlocked at about 27 seats each, Moshe Kahlon and his upstart centrist Kulanu Party could tip the scale in favor of either.

With the keys to the next government in his hands, Kahlon looks to wield far more influence than the 10 out of 120 seats in parliament that his new party is projected to garner and focus the next government on tackling his flagship cause — Israel’s high cost of living.

Personally, Kahlon appears poised to become the country’s powerful next finance minister — regardless of who he ultimately crowns prime minister.

Addressing supporters at his election night headquarters in Tel Aviv, a smiling Kahlon kept his cards close to his chest.

“We want practical solutions. Friends, in places where others gave up, we promised to fight and to win,” he said to applause. “Now is the time to do what is best for all of us. This evening is about recognizing the good. An evening of modesty and good conduct. I am not arrogant, and I certainly won’t gloat.”

The rise of the soft-spoken 54-year-old Kahlon caps an inspirational journey for one of the few current high-profile Israeli politicians of Mizrahi, or Middle Eastern, heritage.

His parents immigrated to Israel from Tripoli, Libya, and he and his six siblings grew up in a modest neighborhood in the city of Hadera — a background that influenced his eventual political focus on social issues like poverty, Israel’s housing crisis and its growing gap between rich and poor.

“He is a self-made man who has worked very hard and he has never gotten anything for free and I think that is what makes him so exciting for so many people in Israel,” said Rachel Azaria, a lawmaker in his new party. “That’s what makes him want to give back and make sure that everyone will have a fair opportunity in Israel to live a fair life.”

Kahlon rose through the ranks of Netanyahu’s Likud Party to become one of its most popular leaders, particularly among its hard-core working-class voters. He was first elected to parliament in 2003 and three years later placed first in the internal Likud primary.

A father of three, he lives in Haifa. His younger brother Kobi is a deputy mayor of Jerusalem.

While taking a hard line on security matters, he was considered socially liberal in the Likud and managed to maintain a working-class appeal while championing economic issues popular with the middle class.

Riding that high public approval, he spent two years planning a comeback at the helm of his own party. Unlike Likud, he now expresses more openness to territorial compromise and a Palestinian state. Many Israelis feel the continued occupation of millions of Palestinians is unsustainable, and that the country must agree to Palestinian independence to preserve its Jewish and democratic character.

Kahlon’s campaign, however, focused almost exclusively on economic issues. He championed the cause of Israelis struggling financially and criticized Netanyahu’s economic policies, including a failure to control housing prices.

On Tuesday, Kahlon said in an apparent reference to the Likud that “not only did it not solve the housing crisis, it also worsened it.”

He has said he wants to serve as finance minister and lead drastic anti-monopolistic reforms just as he did in the cellular market. He steadfastly refused to endorse either Netanyahu or Herzog, saying he would join the side that allowed him to implement his social agenda.

“I am loyal to my way,” he told supporters at Kulanu headquarters. “We want a social government with sensitivity and compassion. We offer a partnership that will deal with the people who have been left behind for years.”