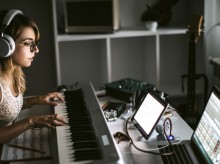 For over a hundred years, doctors have been examining our middle ear essentially the same way. They’ve seated us down, inserted an otoscope or a similarly cold metallic device into our ear canal, pressed their eye against it and started to probe. To further test our hearing, they’d sometimes play various frequencies and ask us to verbalize how they had registered.

But now there is finally the prospect of a more sophisticated, and less invasive, diagnostic tool to detect infections, fluid buildup and hearing trauma. And it has oddly evolved from the world of Telecom fiber optics.

Enter EarSpec, a handheld device developed by the Alfred E. Mann Institute for Biomedical Engineering at the University of Southern California that is based on Nokia Bell Labs research.

It’s another example of how Nokia is creating the type of technology that benefits the broader world beyond the realm of Telecom. In this case, it’s optical imaging technologies that can be used to revolutionize medicine.

The ear’s maze-like anatomy makes for complicated observation beyond the ear drum and therefore difficulty in diagnosing and treating sound trauma, hearing loss and vertigo. But by shining its laser beams, EarSpec allows for direct, real-time observation of the middle ear and parts of the inner ear. This visualization enables the diagnosis of a variety of aural pathologies, all without the radiation, stress and discomfort of the past.

At the heart of this technological breakthrough is something called Optical Coherence Tomography (OCT). It’s a technique that allows non-invasive access to the body by using focused beams of light to peer inside the body and under our skin to capture 3D images of what lies beneath.

OCT was developed in the early 1990s and use of the technology has gained traction in fields such as ophthalmology, cardiology, dermatology and oncology. But the market for these devices is limited because of their bulky size and high cost. A typical OCT system can cost upwards of $100,000 and be roughly the size of a small filing cabinet.

Nokia Bell Labs research, however, has enabled radical miniaturization into something called Integrated OCT that makes it far more effective and accessible.

“We designed and created the world’s smallest OCT,” said Michael Eggleston, the chief architect of Nokia Bell Labs’ OCT miniaturization technology. “This is something you can put in a drawer and that makes it a lot more attractive.”

The Bell Labs Integrated OCT unit includes all the same laser beams, photodetectors and beam steering technology – but much smaller. The current Integrated OCT engine measures less than 1.5 cm x 3 cm, costs less than $10,000 for an entire system at volume and is portable and versatile so it can be used in different locations and for different applications. In the future, it will be an even smaller, integrated and automated device that anyone can use (or wear) for everyday non-invasive health monitoring.

Likely a year or so away from hitting the market, EarSpec represents the first commercial application of this technology. It shines a laser into the ear and then looks at the reflected light that comes back, working much like sonar or ultrasound, only with light. The high-resolution images can create a 3D mapping of the inner ear and provide a detailed diagnostic tool that should be far more effective than the current option of an MRI, which often produces fuzzy ear images.

It’s something that could prove highly beneficial to those regularly exposed to hearing trauma, such as combat soldiers or even heavy metal drummers. Besides ear specialists, there is also a potential market for EarSpec among primary care physicians and veterinarians.

It’s the result of a perfect match between the USC software and the Nokia Bell Labs hardware, and it scans our ear capitalizing on the same technology that uses optical fibers for communications.

Integrated photonic technology was developed at places like Bell Labs to fit more data into the fiber optic ‘pipes’ that make up the backbone of the internet. Integration technology allowed for more and faster lasers, modulators and detectors at each end of a fiber without taking up more space. The ability to reduce size, cost and power is now being adapted to devices that can enhance our health, just as they’ve been used to boost our internet connection.

“If something is wrong with your ear, you can go to a hospital, and they can do tons of tests and imaging and they can usually figure something out eventually. But what integrated OCT will allow someday is something so small you could even put it in an earbud,” Eggleston explained. “So, when you’re just listening to music, it can scan your ear and say: ‘Hey, something here isn’t right.’”

On a larger scale, he said the device could be a harbinger to the “homo augmentus” era in which technology can augment our health and wellbeing.

“I like to think of this as the digitization of ourselves. Basically, it’s always understanding what state we are in so we can track it and understand it and change it at will,” Eggleston said. “This is really kind of the beginning of the mass proliferation of advanced sensors being deployed that will allow us to continually sense and understand the world and ourselves.”