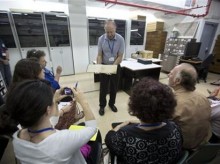 Yad Vashem's archive director Haim Gertner show's a document to visiting international experts and others who are participating in a workshop devoted to the physical and digital preservation of documents. (AP Photo/Sebastian Scheiner)

JERUSALEM (AP) — With survivors dying in growing numbers and their live testimonies soon to be a thing of the past, Holocaust commemoration efforts are increasingly focused around preserving the belongings that contain their stories.

This week Israel’s Yad Vashem Holocaust memorial held a first of its kind workshop devoted to the physical and digital preservation of documents. Over three days, visiting international experts discussed the ethical and technical challenges of both conserving originals for history’s sake while creating a vast digital archive to make them more accessible and user-friendly.

“The two approaches are not mutually exclusive,” said Doris A. Hamburg, director of preservation projects at the U.S. National Archives and Records Administration. “Accessibility is a major goal for so many institutions and conservation helps to facilitate that.”

In the underground Yad Vashem archive containing stacks upon stacks of original documents, books and microfilm, its director Haim Gertner carefully slipped on a pair of white gloves before sifting through a pile of cracked yellowing pages from a diary rescued from a burning synagogue on Kristallnacht — the notorious Night of Broken Glass in November 1938 when Nazi-incited riots marked the start of a campaign to destroy European Jewry.

The brittle pages were falling apart; their corners still had traces of soot. From it he read the following meticulously handwritten phrase: “Memory is the only heaven from which you cannot be expelled.”

It’s the central challenge for Yad Vashem and other Holocaust museums around the world — keeping the memory of the Holocaust alive after its last survivors pass away.

The German Nazis and their collaborators murdered 6 million Jews during World War II, wiping out a third of world Jewry. In addition to rounding up Jews and shipping them to death camps, the Nazis also confiscated their possessions and stole their valuables, leaving little behind. Those who survived often had just a small item or two they managed to keep. Many have clung to the sentimental objects ever since.

The diary in Gertner’s hands was just one such item to be recently acquired. But for such a relic to survive, the museum can’t allow every visitor to get his or her hands on it.

Upon arrival at Yad Vashem, the items go through a sorting process. They are then disinfected and scanned for posterity before it is decided whether they are in good enough condition to go on display in the museum or whether they should be stored in the archives.

The institute’s paper conversion laboratory is often referred to as the “hospital” for fragile documents and items, where they are treated and preserved with an attempt to maintain their original feel. Then they go to the digital services department where they are scanned, photographed and filed.

The scanning provides a secure copy in case the original deteriorates and allows the documents to be posted online for those unable to visit the museum.

Gertner said Yad Vashem scans nearly 20 million documents a year and has accumulated 350,000 hours of audio and video testimony. Within four to five years, all of Yad Vashem will be digitized, he said.

But for many wanting to connect emotionally, the virtual experience is not enough, said Jane E. Klinger, the chief conservator at the United States Holocaust Memorial Museum.

“If digitization were enough why is it that, at least in the United States, in this digital age, museum attendance is increasing overall?” she asked.

“It’s because people want to see the original. They want to get the material sense of it. Artifacts, whether they are documents, manuscripts, photographs, bowls from Auschwitz — I see them as memory in a concrete form, in tangible form. Somebody can tell you a memory, you can remember something, but you can’t really hold it or see it.”