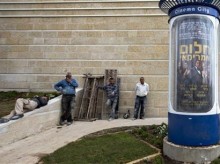 JERUSALEM (AP) — David O. Russell’s crime drama “American Hustle” could be a big winner at Sunday’s Academy Awards. But for the movie’s many international fans, it may take a little longer to realize it. In their country, there is simply no word that captures the true essence of “Hustle.”

Big Hollywood films have immediate name recognition in the United States. But in the rest of the world, moviegoers are long accustomed to their respective countries translating the titles with their own, often quirkier names.

Observers say there is often a need to reframe a linguistic expression or a cultural phenomenon that may be foreign to non-American ears. Sometimes the distributors orchestrate the name shift to create familiarity, stir a local buzz and attract more viewers. Other times, nonsensical translations simply defy logic.

Arie Barak, whose public relations company represents the studios of Fox, Disney and Sony in Israel, said that in this era of globalization the trend is to try to stick as much as possible to the original title, particularly with blockbusters and well-branded superheroes like Batman and Superman. Other times, a literal translation does the trick just fine.

But the bottom line is money, and if the name doesn’t work locally, he said Hollywood studios are more than happy to adapt. That’s how his firm came up with one of the strangest Hebrew translations in recent years, turning the animated comedy flick “Cloudy with a Chance of Meatballs” into an Israeli version called “It’s Raining Falafel.”

“Meatballs are not something Israelis relate to,” Barak said, noting that falafel was a better equivalent of a local food staple. (In Turkey, the title apparently translated just fine and the film was renamed “Raining Kofte,” a local version of the meatball.)

While the Hebrew film lacked any reference to fried balls of chick peas, Barak said the strategy paid off and the movie did well at the box office. Ditto for “Silver Linings Playbook,” which he helped translate into “Optimism is the Name of the Game.” In France, for example, the film was renamed “Happiness Therapy.”

“We always try to stay true to the source,” he said. “When we can’t do that we insist on maintaining the spirit of the movie.”

The results are often amusing. No one can quite explain how “Terminator” became “Deadly Mission,” ”Alien” turned into “The 8th Passenger” or “Top Gun” morphed into “Love in the Skies.” Even the movie “Lost in Translation” was literally lost in translation. It was called “Lost in Tokyo.”

“‘Top Gun you don’t have in Hebrew … when you want to say to a pilot he is good you say he is an ‘Ace’,” said Avi Edery, deputy chief executive of the New Lineo cinema chain in Israel. “Hebrew is a difficult language. It’s not as rich as English sometimes and you cannot translate word by word all the time.”

In France, “The Dukes of Hazzard” became “Sheriff, Make Me Afraid,” and “The Hangover” is known as “Very Bad Trip.” The French have a tendency to add titillating titles to subpar movies to spark interest. So “Step Up” is known as “Sexy Dance,” and “No Strings Attached” became “Sexy Friends.”

In Germany, Woody Allen’s classic “Annie Hall” was called “The Urban Neurotic.” The war comedy “Stripes” was called “I think I’m Being Kissed by an Elk!” and “Eternal Sunshine of the Spotless Mind” was titled “Forget me not!” (In Italy, they called it “If You Leave Me, I Delete You.”)

Emrah Guler, who writes about cinema for Turkey’s Hurriyet Daily News, said the distributor probably used the world “sweet” to describe Julia Roberts in her Oscar-winning performance. Had Gwyneth Paltrow played the part, he said, “the Turkish translation would probably be ‘Elegant Trouble.'”

Yehuda Stav, a veteran Israeli movie critic, said that in Israel the names are actually less absurd than they used to be but the logic remains the same.

“It is done in a clear and decisive manner in order to draw people to the movie theaters,” he said. “They are looking for something catchy or funny, even if it is ridiculous.”

For example, the title of Paul Newman’s 1978 comedy “Slap Shot,” about a bungling minor league hockey team, was considered so obscure in Israel at the time that it was simply renamed “Paul Newman and his gang.” Apparently, this kind of transformation is also common just north of the American border. In the French-speaking Canadian province of Quebec, Woody Allen’s 1973 sci-fi comedy “Sleeper” was turned into “Woody and the Robots.”

For some the phenomenon is no laughing matter.

Danny Warth, an archivist at the Tel Aviv Cinematheque, a local art-house theater, said the crude altering of titles was an insult to the genre.

“We are talking about a work of art here. No one would dare change the name of a novel or a theater production, but in film for some reason it is allowed,” he bemoaned. “A ridiculous name is indeed humorous but I have a hard time being forgiving about this. It is not dignified.”