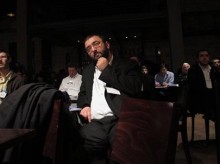 JERUSALEM (AP) — In a chic auditorium typically reserved for late-night concerts, Israel’s next generation of high-tech entrepreneurs are gathered. Though their vocation is modern, their appearance and lifestyle are distinctly traditional and they are seated separately — men to the left, woman to the right.

It’s a first for Israel, a high-tech conference designed specifically for haredim, or ultra-Orthodox Jews.

They are a community long stigmatized for enjoying sweeping draft exemptions and raising large families on taxpayer-funded handouts. They are under ever-growing pressure to break out of their cloistered world of scripture study and get jobs.

In recent years they have indeed begun joining the work force, and some have found an unlikely home in the country’s booming high-tech industry.

That changing reality was illustrated by last week’s gathering of bearded men in black suits and women in head coverings and long dresses who came to network at a leading Jerusalem venture capital firm.

Yitzik Crombie, who initiated the Haredi Hi-Tech Forum, says about 10,000 haredim work in high-tech, 75 percent of them women.

Although they may lack basic math and science skills, advocates say their intense, methodical study of ancient religious texts provides tools that are oddly applicable to computer programing.

“Someone who finished yeshiva and studied Talmud and Gemara, his brain is built for high-tech,” said Crombie, a 30-year-old haredi and chief executive of iSale, which offers mobile guided selling solutions to businesses. “With a little faith, we can make a major breakthrough and become leaders in the field.”

Many rabbis fear immersion in mainstream society will expose haredim (Hebrew for “those who fear God)” to secularism and cut into the prayer and study that has distinguished the Jewish people for centuries.

But unemployment and poverty are very high among haredim who make up about 8 percent of Israel’s 8 million citizens, and families of eight to 10 children are common. More than a quarter of all Israeli first-graders are haredim, studying in independent school systems that focus primarily on religion while barely teaching math, science or English.

Experts have long warned these trends are jeopardizing Israel’s long-term economic prospects. Now, according to Israel’s central bank and its central bureau of statistics, the tide has begun to turn.

In 2011, for instance, 54.5 percent of haredi women and 45 percent of the men held jobs — an increase from 48 percent and 33.1 percent respectively nine years earlier. The numbers, while still far below the national average of around 80 percent, show the community is far from the homogenous mass viewed by outsiders. The shift is further highlighted by their participation in Israel’s greatest engine of economic growth, the high-tech sector, which is secular-dominated.

At the Jerusalem research and development center of the semiconductor giant Intel, more than 100 of the 700 employees are haredim, making chips and performing quality assurance.

“The public discourse in Israel has yet to internalize the enormous changes taking place in the haredi community,” said Jerusalem mayor Nir Barkat, himself a former high-tech executive.

Bringing the haredim and their ethos of scholarly rigor into the work force could ease one of Israeli society’s greatest schisms, which is a perennial source of partisan political discord, especially with the approach of Tuesday’s general election.

So employing the haredim is ethically wise, and also makes smart business sense, said Erel Margalit, founder of the Jerusalem Venture Partners firm that hosted the conference and a parliamentary candidate.

“Israel can compete with India as far as software development. What we now send there, we can send here,” he said. “We offer a working alliance with the haredi community.”

Still, challenges remain. High-tech firms have to provide segregated male and female work space, cafeteria menus must follow the dietary kosher rules more stringently, time must be allocated for prayer and women must be allowed flexible hours if they are to manage their often large families.

Nili Davidovitch, a mother of five, heads Daat Solutions, a firm that specializes in Internet development and quality assurance. She employs 40 haredi women like herself and aims to offer them a career in a cutting-edge field without undermining their lifestyle.

“If you give them an appropriate working environment they will come,” she said. “There are lots of shades of haredim. The society today is not what it once was.”

Shlomo Peeri, the vice president for human resources at the Israeli branch of NDS, a part of Cisco, said the company has never experienced any religion-driven tension. About 100 of the company’s 1,200 employees are haredi systems engineers and developers, he said.

“We’ve created a working environment based on mutual respect and harmony,” he said. “We are a microcosm of Israeli society that shows we can live together.”

But even if the main obstacle remains the haredi community’s lack of scientific education, what is already happening “is a revolution,” said Stuart Hershkowitz, a senior official at the Jerusalem College of Technology.

“It is becoming mainstream in haredi society to find a normal way to support yourself,” he said. “Being resigned to a life of poverty is no longer acceptable to the haredim themselves.”