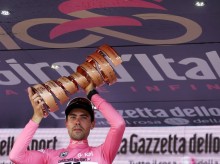 Tom Dumoulin of the Netherlands holds up the trophy after winning the 2017 Giro d’Italia in Milan. (AP Photo/Antonio Calanni)

JERUSALEM (AP) — Winding its way around the walls of Jerusalem’s Old City, through modern Tel Aviv then the Negev desert down to the Red Sea, the start of next year’s Giro d’Italia will highlight Israel’s history, culture and varied topography.

Details of the 2018 race, which will mark the first time a cycling Grand Tour is held outside of Europe, were unveiled by organizers in Jerusalem on Monday.

After a 10.1-kilometer (6.3-mile) opening time trial in Jerusalem, the 167-kilometer (104-mile) second stage will go down the Mediterranean coast from Haifa to Tel Aviv.

Stage 3 will follow a lengthy 226-kilometer (140-mile) route from Beersheba in the Negev desert down to Israel’s southern tip of Eilat along the Red Sea.

Flanked by Italian and Israeli ministers and former cycling greats Alberto Contador and Ivan Basso, Giro director Mauro Vegni said that Israel was selected to host the race because of its “history and uniqueness.”

“Every year the Giro tells the stories of places of great interest,” he said. “The territories crossed by the stages in Israel will show to the world tradition, culture and beautiful landscape.”

More than 175 of the world’s best cyclists will arrive in Israel to kick off the race on May 4.

The Giro is one of cycling’s top three stage races along with the Tour de France and the Spanish Vuelta. It’s being labeled as the biggest and most prestigious sporting event ever held in Israel and is expected to draw tens of thousands of tourists and cycling enthusiasts.

In its 101-year history, the Giro has previously opened a dozen times outside Italy but never outside Europe. Its arrival in Israel is the result of the lobbying efforts of Sylvan Adams, a Canadian-Israeli cycling enthusiast who conjured the idea to coincide with Israel’s marking 70 years of independence.

“While a bicycle race will be taking place, this historic big start of the 101st edition of the Giro is about showcasing our country to hundreds of millions of TV and live spectators, our beautiful outdoor scenery, sharing our history and our culture and most of all, our people,” Adams said.

In recent years, Israel has been promoting itself as an elite sporting event destination. It recently hosted one of the opening rounds of the Eurobasket tournament and is set to host the European judo championships and the lacrosse world championships next year.

Tourism Minister Yariv Levin said this was part of a “revolution in marketing Israel as a destination for leisure and tourism.”

Italian Sport Minister Luca Lotti said the “start from Jerusalem is a metaphorical bridge between our two lands, made up of history, culture and traditions.”

Contador arrived in Israel after ending his career in front of his home crowd at the Vuelta. Considered one of Spain’s greatest riders, the 34-year-old Contador won that event three times, along with the Tour de France twice and the Giro d’Italia twice. He was stripped of a third Tour victory for doping.

“Every year the Giro introduces new things, which makes it unique. Next year, starting from the world’s most spiritual city will make the Giro even more special,” Basso said.