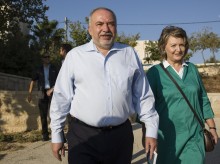 Avigdor Liberman comes to vote with is wife Ella in the settlement of Nokdim. (AP Photo/Tsafrir Abayov)

JERUSALEM (AP) — The veteran Israeli politician Avigdor Lieberman took the political gamble of his life when he spurned his mentor, Prime Minister Benjamin Netanyahu, and forced an unprecedented repeat election. As results began rolling in from Tuesday’s vote, it appeared to have paid off.

With neither Netanyahu’s Likud nor former military chief Benny Gantz’s centrist Blue and White party forecast to secure a majority in the 120-seat parliament without his support, Lieberman has emerged as the election’s true winner — the one most likely to dictate the makeup of the next government.

Lieberman passed up the post of defense minister in Netanyahu’s government following April’s election and refused to join the new coalition because of what he said was the excessive influence it granted to ultra-Orthodox Jewish parties. His exit left the prime minister one seat short of a parliamentary majority. Instead of allowing an alternative candidate a chance to form a government, Netanyahu dissolved parliament and called another snap election — launching a scathing campaign aimed at ending the career of his former protégé.

But now it may turn out to be the other way around.

Initial exit polls gave Lieberman’s hard-line Yisrael Beitenu party 8-10 seats in parliament, nearly doubling his previous tally. He campaigned on a promise to force a secular unity government between Likud and Blue and White that would leave out the ultra-Orthodox parties. The twist is that Gantz, whose party seems to have edged Likud, has ruled out sitting with a Netanyahu-led Likud at a time when the prime minister is expected to be indicted on corruption charges in the coming weeks. That could spell the end of Netanyahu’s lengthy rule.

“Everything we said before the election, we are also saying after the election,” Lieberman said to raucous applause at party headquarters. “We have only one option: a broad, liberal, national government made up of Yisrael Beitenu, Likud and Blue and White.”

The focus now shifts to Israeli President Reuven Rivlin, who is tasked with choosing the candidate he believes has the best chance of forming a stable coalition. Rivlin is to consult with all the parties in the coming days to hear their recommendations before making his decision. The leader of the largest party typically gets the nod, but not always.

Either way, Lieberman looks to have the upper hand in forcing out the ultra-Orthodox, Netanyahu’s long-time loyal partners.

The Moldovan-born Lieberman started out as a top aide to Netanyahu during his first term in office in the 1990s before embarking on a political career of his own as a nationalist hard-liner and champion of immigrants from the former Soviet Union. Since then, he has known his ups and downs with his former boss, including as Netanyahu’s foreign minister and defense minister. He eventually resigned last year because Netanyahu kept blocking his plans to strike hard against Gaza militants.

But his secular agenda and iconoclastic straight talk — delivered in a slow, Russian-accented monotone — has made him an unlikely savior for those tired of Netanyahu’s corruption-tainted, decade-long grip on power. That’s despite the fact that Lieberman survived a lengthy corruption scandal himself.

With his core constituency of Russian-speaking immigrants becoming fully integrated into Israeli society, Lieberman had seen his political fortunes dwindle in recent elections and he came precariously close to dropping below the electoral threshold in April’s vote.

But then he changed tack, perhaps sensing that with Israelis largely united on security issues and largely uninterested in the conflict with the Palestinians, the most relevant divide was not between the left and right but between the secular and the religious. Once one of the most polarizing figures in Israeli politics, Lieberman has reinvented himself as a secular bridge builder, finding newfound support even among bastions of liberal Tel Aviv.

“We’ve always said that a unity government is only possible in emergency situations. And I tell you and I tell every citizen today watching us on television: the situation, both security-wise and economically, is an emergency,” he said in his speech late Tuesday. “The country, therefore, requires a broad government, not a government that fights for survival from week to week, from one no-confidence motion to another.”