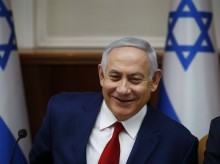 JERUSALEM (AP) — Barring a devastating legal ruling against him in a series of corruption allegations, Israeli Prime Minister Benjamin Netanyahu looks to be cruising toward re-election and a historic fifth term in office after the upcoming April 9 vote.

Part of his longevity is due to Israel’s splintered electoral system, which allows him to rule with just a quarter of the vote for his ruling Likud Party. The first week of the election campaign has already seen a dizzying series of maneuvers, with old parties splitting and new ones emerging, most seeming to work in Netanyahu’s favor.

Here’s a look at how the Israeli election works and the factors that decide how its government is formed.

Israeli democracy operates on a parliamentary system in which the government needs a majority to rule. Since no party has ever earned more than 61 of the 120 seats in the Israeli Knesset, a coalition is required.

For Israel’s first three decades, the founding socialist Labor Party ruled easily by adding a small party or two to its governments, with the hawkish Likud and its predecessor typically serving as the main opposition party.

Since Likud first rose to power in 1977, it has built coalitions with other right-wing parties or formed a so-called unity government with Labor.

Israel briefly experimented with direct elections for prime minister in the 1990s but quickly reverted back to voting for parties, rather than individuals.

After an election, Israel’s president chooses the party leader he decides has the best chance of building a coalition. This job has become more complicated as smaller personality-driven parties gain ground. Recent coalitions have included numerous mid-sized parties, often at odds with each other. Power struggles continue long after the election.

In the absence of large parties, focus has shifted toward unofficial blocs of political parties with similar ideologies and interests.

Though most polls indicate Likud winning roughly 30 seats, it can usually build a majority with traditional nationalist and ultra-Orthodox allies.

The center-left bloc, traditionally in favor of negotiating a statehood deal with the Palestinians, has lost support. It has not been able to muster a majority. Parties representing Israel’s Arab minority have not been asked to join coalitions.

This arithmetic allowed Netanyahu to rise to power in 2009, even when his party finished second.

“Netanyahu is a bloc player, not an individual player. All he cares about is getting 61,” said political commentator Amit Segal.

Several centrist parties with more ambiguous platforms have muddled the math in recent years, with the potential to swing either right or left. But the various combinations have yet to produce a “blocking majority” to Likud.

The anti-Netanyahu forces in Israel have been yearning for years to unite into a single list that can give him a good fight. But so far there has been more splitting than uniting. Of the current 10 factions in Parliament, three have already fractured. Two former military chiefs have announced the formation of new parties as well.

There is a distinct possibility that as many as 15 parties will get in next time, tying an all-time high.

A party has to garner at least 3.25 percent of the vote to get into parliament. Niche and single-issue parties often fail to break in, and their votes are lost.

Therefore, this week’s news that a pair of nationalist Cabinet ministers, Naftali Bennett and Ayelet Shaked, bolted their pro-settler Jewish Home party to form a new right-wing party could be bad news for Netanyahu. Without them, Jewish Home is in danger of falling short of the threshold. It is reportedly in talks to link up with other borderline factions on the right.

Regardless of the fragmentation on the right, Netanyahu remains its only viable candidate for prime minister. But on the center-left, several consider themselves worthy challengers and are busy competing with each other.

The freshest face is retired Lt. Gen. Benny Gantz, a former military chief who just entered the race and has been polling a distant second to Netanyahu. The fact that he is the public’s most popular alternative even before saying a word about his worldview speaks to the Israeli voters’ yearning for new options.

Lagging far behind is Labor, which has sunk to its lowest point in history, polling in single figures. It has been mired in internal conflicts that came to a head this week when its leader, Avi Gabbay, dramatically dissolved his union with former Foreign Minister Tzipi Livni on live TV. She is now looking for a new home.

Moshe Yaalon, a former defense minister and military chief, has also started a new party, as has Orly Levy-Abekasis, the daughter of former Likud stalwart David Levy, whose economic platform looks to appeal to some left-leaning working-class voters.

Also waiting in the wings is former Prime Minister Ehud Barak, who has been advocating for a large merger between anti-Netanyahu forces.

The prime minister himself seems to be observing the unfolding drama with glee. From a state visit in Brazil, he mocked the opposition by retweeting a Likud meme depicting two cats fighting on a leather couch.

“I don’t get involved in how the left divides its votes,” he wrote. “What matters to me is that the right will form the next government and keep leading Israel.”