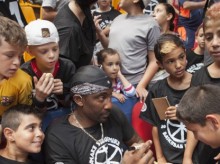 Arriving in what he called “my favorite city in the world” for a new chapter as a player for Hapoel Jerusalem, Stoudemire says he came to Israel to win – and to continue a spiritual journal to trace his Hebrew roots.

Hosting some 140 Jewish and Arab kids at his basketball peace camp on Monday, Stoudemire said he didn’t come to the Holy Land just for “fun” but to pursue the championship that eluded him during his 14-year NBA career.

He said he had offers to keep playing from at least three NBA teams – which he didn’t name – but since none of them was a legitimate title contender “I decided to retire and bring my talents over to Israel.”

“To be able to continue to play the game of basketball in Jerusalem is an opportunity that can only happen once in someone’s lifetime and, for me and my family, we want to take advantage of this opportunity while I still have good health,” Stoudemire said at a Jerusalem practice facility. “The most important thing for me right now is to try and create a winning atmosphere around Hapoel Jerusalem.”

The startling move by the six-time All-Star instantly provides the Israeli league with the biggest basketball star it has ever had.

Stoudemire was the No. 9 pick in the 2002 draft, Rookie of the Year the following season and averaged 21.4 points in his eight seasons with the Phoenix Suns, teaming with point guard Steve Nash to help them become the NBA’s most potent offense. Stoudemire led the Suns to the 2010 Western Conference finals before signing a five-year, $100 million contract with the New York Knicks that summer.

Shortly after, the 6-foot-10 (2.08-meter) forward began exploring what he believed to be “Hebrew roots” through his mother, Carrie. He travelled to Israel frequently, learned Hebrew phrases and inked a Star of David tattoo on his body.

As he soldiered through injuries and his once explosive play began to fade, Stoudemire maintained close ties to Israel.

He was part of an ownership group that purchased Hapoel Jerusalem in 2013. As part of his new contract, he will sell his shares to majority owner Ori Allon.

Hapoel Jerusalem won the 2014-15 Israeli Basketball League title – its first, after decades of playing second fiddle to perennial powerhouse Maccabi Tel Aviv – and will compete in the 2016-17 EuroCup tournament. Stoudemire’s arrival has sparked hopes that Jerusalem could finally be a threat in Europe. But Guy Harel, the team’s general manager, said Stoudemire’s impact will go much further than what he brings to the court. In just the past week, the team has added 1,000 new season ticket holders.

“All of a sudden Hapoel Jerusalem is a lot more interesting,” Harel said.

Sacramento Kings forward Omri Casspi, Israel’s current lone NBA player, said Stoudemire has been a great ambassador for the country. He joined Stoudemire at Monday’s clinic along with fellow NBA players Rudy Gay, Chris Copeland and Beno Udrih who were visiting on a mission of Casspi’s nonprofit foundation to promote Israel internationally.

The 33-year-old Stoudemire’s move looks to give the cause a big boost. Stoudemire and his wife, Alexis, are currently shopping for a home and looking at schools for their four children.

“I hope it provides a great light to Israel and Jerusalem. Hopefully people will see that it is not as bad as people think it is and so hopefully this will be the start of something great,” Stoudemire said. “Jerusalem to me is my favorite city in the world because of the history here. The history goes back thousands and thousands of years and there is a special place in my heart for Jerusalem.”