For Israel, a rearmed Hezbollah in Lebanon is top concern By Aron Heller | Military/Security, Friday, 30 Nov 2018 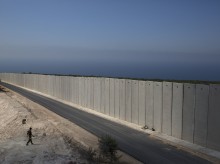 ON THE ISRAEL-LEBANON BORDER (AP) — On a moonlit night, some two dozen Israeli soldiers in full battle gear march near a Lebanese border village with a bomb-sniffing dog, searching for explosives and infiltrators.

Suddenly the force stops. Through night-vision goggles, two suspicious men appear over the ridge, holding what looks like binoculars. Could they be undercover Hezbollah guerrillas? Lebanese soldiers on a night patrol? Or perhaps U.N. peacekeepers?

The men appear unarmed and since they are on the other side of the internationally recognized “blue line” that separates the two countries, Israeli troops move on, completing another routine foot patrol along a scenic frontier that has remained quiet but tense since the bloody battles of a 2006 summer war.

Even with attention currently focused on Gaza militants along the southern front, Israel’s main security concerns lie to the north, along the border with Lebanon.

Israeli officials have long warned the threat posed by Gaza’s Hamas rulers pales in comparison to that of Lebanon’s Iran-backed Hezbollah militant group — a heavily-armed mini-army with valuable combat experience and an arsenal of some 150,000 rockets that can reach nearly every part of Israel.

It’s along this northern front that Israeli soldiers come face-to-face with Hezbollah guerrillas and where any skirmish could spark an all-out war.

“The rules of the game are very clear. They know I’m here and I know they’re there,” said Lt. Col. Aviv, a regional battalion commander. “But if they break that equation, they are going to get hit.”

From his base along the border near the Israeli farming community of Avivim, he can see the hilltop Lebanese village of Maroun al-Ras, a U.N. observer outpost and a new square house inside an agricultural field, assumed to be a Hezbollah lookout.

Under the U.N.-brokered cease-fire that ended the 2006 war, Hezbollah’s troops are prohibited from approaching the border. But Israeli intelligence says Hezbollah men operate freely, generally unarmed and in civilian clothes. Sometimes they come within just a few meters (feet) of the Israeli troops, it says. Only a coil of barbed wire separates them but there are no interactions.

“They are very disciplined soldiers. They won’t initiate anything,” said Aviv, who can only be identified by his first name under military regulations.

When Prime Minister Benjamin Netanyahu recently decided against a full-scale offensive in Gaza, he cited the current “security-sensitive period” in what was widely assumed to be a reference to the northern front.

Israel has generally refrained from engaging in Syria’s civil war, where Hezbollah has fought fiercely alongside President Bashar Assad’s troops, though it has carried out scores of airstrikes against what Israel says were Iranian shipments of advanced weapons bound for Hezbollah.

Until recently, Israel flew its jets through Syrian skies with impunity. But that was severely restricted after a Russian plane was downed in September by Syrian forces responding to an Israeli air strike, a friendly fire incident that stoked Russian anger toward Israel and hastened the delivery of sophisticated S-300 air defense systems to Syria.

With Syria’s civil war winding down, an empowered Hezbollah is now free to re-establish itself back home in Lebanon and refocus on Israel, said Eyal Ben-Reuven, a lawmaker and retired general who commanded Israeli ground troops in the 2006 war. Armed with more exact rockets and munitions, Hezbollah now poses a far more dangerous threat, he said.

“A terror organization, unlike a country, doesn’t stockpile weapons for deterrence but in order to use them one day,” he said. “I suspect they will now try to goad Israel. … The war the Israeli military has to prepare for is the one against Hezbollah.”

Neither side appears interested quite yet in another full-fledged confrontation like the monthlong 2006 war, which ended in stalemate and in which more than 1,200 Lebanese and 160 Israelis were killed.

With a lagging economy and a paralyzed government, Lebanon appears unlikely to have the stomach for another war. Though emboldened politically from the Syria war and having surged in power in Lebanese parliamentary elections earlier this year, Hezbollah is going through a financial crunch. It also is recovering after having hundreds of fighters killed or wounded in Syria.

Still, Israel accuses it of ratchetting up tensions.

The military says it recently uncovered militant surveillance outposts along the border, set up under the guise of a tree-planting campaign by an environmental advocacy group, “Green Without Borders.” The group acknowledges its affiliation with Hezbollah but says its work is purely environmental.

Netanyahu also accused Hezbollah of setting up secret rocket launching sites near Beirut’s international airport. The military says Hezbollah is establishing new launching sites among civilians — a trap that could make it difficult for Israel to respond forcefully.

But the military says its major concern is Iranian-backed efforts to convert some of Hezbollah’s unguided rockets into precision munitions that could wreak far more devastation on Israeli targets.

Hezbollah declined to respond to the accusations. Its leader, Hassan Nasrallah, said recently the group is “more confident than ever” and ready for war at any time.

On the ground, the potential for trouble is clear. Israel occupied parts of southern Lebanon before withdrawing in 2000 to the U.N.-demarcated “blue line.” But Lebanon and Hezbollah have disputed parts of the U.N. map, and an official border has never been agreed on by the two enemy countries.

Due to the uneven terrain, Israel’s sophisticated northern fence does not run precisely along the border, creating enclaves of Israeli territory that are inside the blue line but beyond the fence.

Israel had previously neglected these areas and its troops were ambushed there in 2006. Now it’s stepping up its presence, fortifying fences and clearing away brush to improve observation.

It’s also sending a signal that violations won’t be tolerated — even on a night patrol, Israeli troops don’t hide their presence.

“I have an interest that they see I’m here,” said Lt. Col. Aviv, a bullet loaded in the chamber of his modified M-16 rifle. “There are no surprises.”