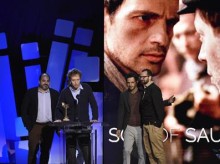 JERUSALEM (AP) — Israel’s Yad Vashem Holocaust museum has kicked off its annual remembrance ceremonies with a special screening of the Oscar-winning film “Son of Saul,” acknowledging the unique role movies play in maintaining the memory of the Holocaust.

The Hungarian film, which tells the story of a Jewish Nazi death camp inmate who obsessively seeks a proper burial for a boy he believes to be his son, also mirrors Yad Vashem’s central theme this year — the struggle to maintain the human spirit amid inhumanity.

Israel will come to a standstill on Thursday as sirens wail for two minutes. In the annual ritual, pedestrians typically stop in their tracks, while cars and busses pull over and people step out to stand and bow their heads. Solemn events are held, melancholic music and interviews with survivors fill the airwaves, and TV stations show documentaries about the genocide.

Yad Vashem is the focal point of the annual memorial day, as the nation’s leaders gather there for the central ceremony. The public is encouraged to fill out pages of testimonies about the victims, contribute to the campaign to collect Holocaust-era items and visit the vast complex.

Yad Vashem is home to the world’s largest collection of documents, publications and databases on the Nazi genocide of 6 million Jews. But despite this “mountain of information,” movies — particularly high-profile ones — are far more effective in reaching the general public, said Robert Rozett, director of the Yad Vashem libraries, which house an archive of 157,000 titles.

“There is no question that films are the most prolific way to impart information or awareness of consciousness of the Holocaust,” he said. “They are just seen by so many more people than those who will ever pick up a book or article.”

He said the hope was that by seeing a powerful film, viewers will be inspired to seek out more information.

To that end, Yad Vashem has established its online film database with information on more than 10,000 Holocaust-related films. The most famous are Academy Award winners such as “Schindler’s List,” ”The Pianist,” ”Life is Beautiful,” ”The Counterfeiters” and “Sophie’s Choice” — films that have arguably molded much of the public perception of the Holocaust, in which the German Nazis and their collaborators wiped out a third of world Jewry.

Liat Ben-Haviv, who heads Yad Vashem’s visual center, said “Son of Saul” could join that list. This year’s Academy Award winner for best foreign language film also won the Golden Globe and the Grand Prix at the 2015 Cannes Film Festival. The buzz has led to it being distributed in nearly 60 countries, many of which have had little exposure to such raw depiction of the Nazi death camps.

The movie has earned praise for its use of long tracking shots to follow the film’s protagonist as he navigates the horrors of the Auschwitz death camp and struggles to find meaning amid the desperation, mayhem and brutality.

“The film tells the story of spiritual survival,” said Ben-Haviv, “and that perfectly fits this year’s theme.”

It also shines a light on one of the most difficult and sensitive legacies of the Nazi death machine — the forcing of Jewish prisoners to take part in the extermination of their own people.

The film’s protagonist, Saul Auslander, is a member of the Sonderkommando unit responsible for burning the bodies of those gassed to death and then disposing of their ashes. The group lived separately from other Jewish prisoners and enjoyed some level of preferential treatment, leading some other inmates to consider them traitors. But they too were ultimately rounded up and killed by the Nazis.

“These were not volunteers, they were forcefully and deceitfully recruited and each one was also condemned to death. That any of them survived is a miracle,” said Gideon Greif, chief historian of the Shem Olam institute and an expert on the Sonderkommando, whose book on the topic was cited by director László Nemes as one of his inspirations.

In an era of dwindling survivors, with less than 200,000 remaining in Israel and a similar number worldwide, Greif said he knew of only two left from the notorious production line of death, which included stripping bodies of valuables, shoving them into ovens and then dumping their ashes in the river.

“It’s the peak of German brutality. It was incredibly sophisticated and sadistic,” Greif said. “This is absolutely the worst job a human being has ever had to do.”