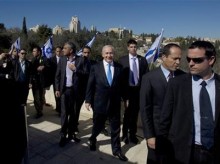 JERUSALEM (AP) — Even before Israel’s hastily called election campaign kicks into gear, a former ally of Prime Minister Benjamin Netanyahu is shaping up to be the biggest potential challenge to his re-election.

Moshe Kahlon was the most popular Cabinet minister in Netanyahu’s previous government, drawing wide appeal for his working-class background and for pushing daring reforms. But prior to the 2013 election he abruptly quit politics over differences with Netanyahu. Now he’s back with a new centrist party that could tip the scales in favor of those seeking to topple the longtime Israeli leader.

Netanyahu’s coalition disintegrated this week in dramatic fashion and lawmakers speedily voted to dissolve parliament Wednesday, setting the country on a crash course for national elections in March — two years ahead of schedule.

Kahlon responded swiftly, officially announcing the new party Wednesday in a speech to university students. “I am returning to the political arena,” he said. “I used to be in a very strong political framework, but I decided to establish a new framework and this is for our children.” He gave no details on his political platform.

He has historically taken hard-line positions toward the Palestinians, but more recently has expressed support for a territorial compromise that would establish a Palestinian state. However, his agenda has focused much more heavily on economic and cost-of-living issues.

After his unwieldy coalition of secular centrists and religious hardliners imploded, Netanyahu is looking to secure a fourth term as premier by increasing support for his hardline Likud Party. He hopes to secure a strong majority for a “national bloc” that includes his traditional allies of ultra-Orthodox Jewish parties, Foreign Minister Avigdor Lieberman’s nationalist Yisrael Beitenu faction and the hard line Jewish Home party, which is strongly linked to the West Bank settler movement. This bloc tends to take a hard line in peace talks with the Palestinians.

In the last vote, the parties earned a combined 61 out of 120 seats in parliament. The majority proved too slim for Netanyahu to rule effectively and he was forced to reach out to two centrist parties, Yesh Atid and Hatnuah, to shore up his majority. Netanyahu’s feuds with these parties led to his decision to call a new election.

This time a strong showing by Kahlon could give Netanyahu the breathing room he needs — in return for a top Cabinet post. Alternatively he could crown an alternative if Netanyahu can’t muster a majority on his own, said Avraham Diskin, a political scientist from Jerusalem’s Hebrew University.

“He is a central pivot in this election,” he said. “He’s in great shape.”

Early opinion polls predict that Kahlon will win a solid 10 to 12 seats, even before announcing a platform or fellow party members. He appears poised to take a big chunk out of the elusive “center” of Israeli politics — an electorate tired of the traditional Likud and Labor parties. Yesh Atid’s Yair Lapid was the big winner in 2013 after tapping into economic concerns among this group.

Kahlon, 54, appears to be different.

While taking a hard line on security matters, he was considered socially liberal in the Likud. The son of Libyan immigrants, Kahlon grew up in a hardscrabble town in northern Israel and is one of the few high-profile politicians of Middle Eastern background. He has managed to maintain a working-class appeal while championing economic issues popular with the middle class.

Unlike other newcomers, he arrives with proven credentials in government. His crowning achievement as communications minister was taking on Israel’s powerful wireless cartel and forcing them to lower mobile phone prices by introducing new competitors.

Political commentator Nehama Dueck said a lot depends on what kind of people Kahlon surrounds himself with.

Kahlon appears poised to recruit a “dream team” of military, economic and social figures to help him reach a larger audience.

“He will rise and fall based on his list for parliament,” said Dueck. “In Israel, we have this ‘thing’ about multiple parties and we’re always looking for the new, fresh party that offers hope. Kahlon is the next big thing.”