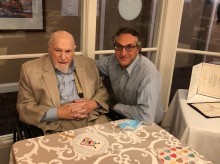 Published in The Canadian Jewish News on Remembrance Day 2021

For most of his life, my grandfather, Mickey Heller, tried to put the memories of the Second World War behind him. After two years in Europe as a navigator in the Royal Canadian Air Force, he returned home to Toronto in 1944, married his sweetheart, started a family and a business and seemingly never looked back.

That formative experience and everything that went along with it was a conversation he never really wanted to have. Only in his 90s did he finally, and quite reluctantly, cooperate with my decade-long quest to unearth his shadowy past. It was a delicate dance that alternated between his occasional dropping of cryptic clues and enchanting anecdotes and withdrawing back to his ambivalence. The journey culminated in a pair of articles about him and his wartime friends that I wrote in 2019 for The New York Times Magazine and Tablet Magazine. As far as I was concerned, that had finally put the matter to rest.

So, it was telling that, without prompting, my Zaidy decided to devote his 100th birthday celebrations last week to the theme of commemorating the wartime service of Jewish Canadian veterans like himself.

Now largely confined to a wheelchair, he trekked out of his assisted living facility on a chilly autumn morning to take his visiting children and grandchildren from Israel to visit a memorial he contributed to outside the Prosserman Jewish Community Centre on Bathurst Street. The granite slab was flanked by Canadian and Israeli flags that were dedicated by my grandparents, Mickey and Eunice Heller, on behalf of the Canadian half of their family who served in the first and second world wars and the Israeli half, like me, who served in the Israeli Defense Forces over the years.

Looking at the hundreds of engraved names of the Canadian Jewish soldiers, those who made it back and those who didn’t, Zaidy glowed with pride. Pointing at the various names, he regaled us with stories about his old high school friends from Harbord Collegiate who died in action and noted the successes of those who went on to live nearly as long as he has. The names rolled off his tongue: his brother Joe, his brother-in-law Morris, his good friends Wilfrid Canter and Somer James.

Energized, he rolled into the JCC asking to speak to a manager so he could share memories, the kind he has refrained from for years.

“I’m the only one still here who knew all those guys out there,” he told the stunned receptionist.

She said she would look for the appropriate person. “Well, you better do it quick because I don’t know how long I’m going to last,” he quipped. “This may be my last time here.”

I wouldn’t bet on it. In the days surrounding his Nov. 3 birthday, Zaidy was more vibrant, witty and downright funny than he has been in a decade. Over the past five years, he’s recovered from various health scares, including contracting COVID. Perhaps more significantly, he’s found a new zest for life even after losing his beloved wife of 72 years.

Most surprisingly, he’s not only willing to finally engage in stories about his war service but even initiates them. He shared many of them with me and my visiting siblings, telling us about his voyage overseas in the stern of the Queen Elizabeth and showing us mementoes from that journey. The top headline from the Nov. 1, 1942 edition of The Elizabethan News was “Rommel’s tank attacks held by Eighth Army” and “Strong Japanese fleet unit bombed.”

At the birthday party itself, where he was surrounded by his four children, nine grandchildren and other family members and longtime friends, Zaidy held court alongside a framed letter he received from Lawrence MacAulay, Canada’s Minister of Veterans Affairs, who congratulated him on his 100th birthday.

“All Canadians benefit from the tremendous sacrifices and contributions made by Veterans like you, and for that we remain truly grateful,” MacAulay wrote. “It is my honour to commend you for your dedicated service during the Second World War. The bravery and determination of those who served Canada helped ensure a safer, more peaceful world.”

Always a man of few words, Zaidy kept his own comments brief, devoting them almost exclusively to the visit we paid the war memorial. His voice cracking, he asked his guests to make the pilgrimage to honour “all the Jewish boys who sacrificed their lives.”

“If you get a chance, it’s real history,” he added.

In one of his more candid moments of our five-day visit, Zaidy pulled out his wallet to reveal the two pictures he always carried with him. The first was his favourite of his wife and children. The second was of himself and three other Canadian Jewish wartime buddies, posing in uniform at Trafalgar Square in October 1943, exactly 78 years earlier—yet another reminder of how momentous that period remained for Zaidy even through his years of prolonged silence.

Amazingly, a man Zaidy is seen hugging in the picture, Ralph Goldman, was still alive and, in a fitting coda, he made it to Zaidy’s party, where the two centenarians warmly embraced once again.

It was quite a thrill to meet another piece of living history, even more so one with such a firm handshake and the same flowing lock of hair as in his old black-and-white photo. He was a flight mechanic, a “grease monkey” he said, and told me about once emerging from his base near London to see a “light show” of bombs exploding from above. He also said he used to go swimming in the English Channel even though it was heavily mined. He figured it would take more than his mere frame to set one off. But he acknowledged that that was the closest he got to the action, nothing like the boys in Bomber Command with Zaidy.

Details aside, it was just very touching to meet someone who knew Zaidy way back then and to see how they had maintained this special connection so long after.

Watching the two men together was a stirring reminder of how, for better or for worse, the Second World War will always define their “greatest generation.” About 17,000 Jewish Canadians served in that war. Mickey and Ralph, both 100, are truly among the last of their kind.

Aron Heller is a Canadian/American/Israeli writer and broadcaster and a former longtime AP correspondent and journalism professor. You can follow him on Twitter, and read a selection of his work at aronheller.com.