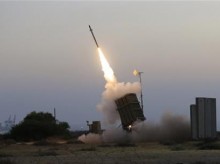 An Iron Dome air defense system fires to intercept a rocket from Gaza Strip in the costal city of Ashkelon. (AP Photo/Tsafrir Abayov)

TEL AVIV, Israel (AP) — Israel says its punishing air assault on Hamas militants, their property and their weaponry has delivered a devastating blow to the Islamic militant group. Yet rocket fire at Israel has continued almost unabated.

The military says that due to years of generous Iranian shipments, thousands of rockets remain in Gaza, and there is no quick way to eliminate the threat.

It says its goal is to inflict so much pain on Hamas that it will be deterred from attacking Israel again — just like Hezbollah guerrillas in Lebanon have largely remained on the sidelines for the past eight years.

The military also says it wants to punish Hamas for the violence. But both goals are hard to quantify in the short term. A similar offensive in November 2012 was also deemed a military success, though it left Israel vulnerable to rocket fire. Israel also launched a large offensive in late 2008 that delivered a tenuous cease-fire.

“There is no knockout, it is more complicated,” said a senior military official involved in the fighting, who spoke on condition of anonymity under military guidelines. But, he added, “if there is a map of pain that the enemy sees, it will have to think about things.”

The rocket threat has been in the making for well over a decade. In the early 2000s, Hamas began firing rudimentary, homegrown rockets that were inaccurate, flew short distances and carried a tiny payload.

Today, the army says the group has an arsenal of some 10,000 rockets, including longer-range, foreign-made weapons capable of reaching virtually anywhere in Israel. The current round of fighting has seen air-raid sirens sound in Jerusalem, Tel Aviv and Haifa, Israel’s three-largest cities. There have been no fatalities, in large part because of dozens of interceptions by the high-tech “Iron Dome” rocket-defense system.

Israel launched its offensive last Tuesday in what it says was a response to weeks of heavy rocket attacks out of Gaza. It has carried out hundreds of airstrikes, systematically targeting what it says is Hamas’ rocket-launching production and launching capabilities.

On Sunday, Israel sent special forces into Gaza for a brief ground operation, its first in the latest fighting, in an attempt to take out rocket launching pads that could not be destroyed from the air.

Israeli analysts say that most of the remaining long-range rockets are believed to be stashed beneath residential buildings, and that the only way to completely remove the threat would be to re-conquer Gaza, from which Israel withdrew in 2005, and stay there for a lengthy period. Such a scenario would carry great risk, and Israeli leaders are wary.

“There is no attempt here to solve the conflict. We are talking about managing the conflict and as long as it goes on, quiet will only be temporary,” said Shlomo Brom, a retired Israeli general who is now an analyst at the Institute for National Security Studies, an Israeli think tank. “It’s a mistake to think that if you have established deterrence it will stay that way. Deterrence must be maintained.”

Israel cites the example of Lebanon as a potential blueprint. It battled a bloody monthlong war with Hezbollah in 2006 that saw thousands of rockets fired at Israel and 160 Israelis killed. About 1,200 Lebanese were killed in an Israeli air and ground offensive that hammered Hezbollah strongholds.

While the fighting ended in a stalemate, the border has remained largely quiet as Hezbollah, despite its fiery rhetoric, has refrained from provoking Israel.

Israel hopes the same thing will happen with Hamas.

In the six days of fighting since Tuesday, Israel launched more than 1,300 airstrikes that it says have killed dozens of militants, knocked out scores of rocket launchers, flattened Hamas installations and even destroyed the homes of its senior leaders.

But militants have fired more than 800 rockets at Israel at a rate that hasn’t slowed down.

Military spokesman Lt. Col. Peter Lerner said the military estimated 20 percent of the rockets in Gaza have either been fired or destroyed by Israel. Besides diminishing Hamas’ future capabilities, he said Israel’s assaults were mostly aimed at convincing Hamas never to try it again.

“When they come out of their bunkers and they look around, they are going to have to make a serious estimation of whether what they have done was worth it,” he said. “And people will look in their eyes and say ‘Why did you do this? What did you gain from this?'”

Moussa Abu Marzouk, the No. 2 leader of Hamas, defiantly rejected the notion, saying the current round of fighting would only strengthen his movement’s resolve.

“They (the Israelis) are doing all of that (the airstrikes) to force us to raise the white flag,” he wrote on his Facebook page Sunday. “The future is ours and if there is a truce it’s going to be a temporary one. This is not the last battle.”

Fathi Sabbah, a Gaza-based writer for the London-based Al-Hayat newspaper, said Hamas’ popularity on the Palestinian street had actually grown during the operation and he did not foresee it putting down its arms. “This is just a round, like the previous ones, and there’ll be more to come in the future as long as no political solution is found to the Palestinian cause,” he said.

Writing in the Yediot Ahronot daily, commentator Yossi Yehoshua argued that any cease-fire that does not guarantee a complete demilitarization of Gaza would be a failure for Israel since it would then invariably “find itself in the next round within a very short period of time.”