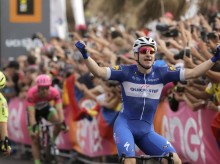 Elia Viviani crosses the finish line in Tel Aviv during the second stage of the 2018 Giro d’Italia. (AP Photo/Sebastian Scheiner)

TEL AVIV, Israel (AP) — A day after his opening stage lead slipped away to Giro d’Italia defending champion Tom Dumoulin — the last of the 175 riders in the individual time trial — Rohan Dennis got a measure of revenge by taking the pink jersey on Saturday.

Elia Viviani won the second stage in less than four hours, nudging past Italian countryman Jakub Mareczko in a bunch sprint finish to cap the 167-kilometer (104-mile) leg down the Mediterranean coast from Haifa to Tel Aviv.

But it was Dennis, team leader of BMC Racing, who took a one-second lead over Dumoulin overall by winning the leg’s second intermediate sprint. Victor Campenaerts of Belgium remained in third place.

“Yesterday would have been great to get the stage win but I didn’t,” Dennis said with a chuckle. “We flirted with the idea of going after that second sprint. I wasn’t overly keen to do it but the team said, ‘Look, we are doing it,’ and they did an excellent job of delivering me.”

Four-time Tour de France champion Chris Froome, who bloodied his right knee and ripped his shorts and jersey in a training crash on Friday, was in 20th place, 38 seconds behind the leader.

Israelis lined the coastal route to embrace the first Grand Tour to be held outside Europe. Cyclists passed landmarks such as the ancient cities of Acre and Caesarea and encountered thousands of enthusiastic fans, some of whom ran and biked alongside the pros as they whizzed through the Holy Land.

It’s the biggest and most prestigious sporting event staged in Israel, and coincides with Israel marking 70 years of independence.

Viviani, who won a track gold medal at the 2016 Olympics and rides for Quick-Step Floors, said he was pleasantly surprised by the crowds.

“This is definitely something I will take home with me. It is not a given when you go to a new country that maybe doesn’t have a long tradition that you are welcomed with such a crowd,” he said. “That is the most surprising thing for me.”

Stage 3 on Sunday will follow a lengthy 229-kilometer (143-mile) route — the second-longest leg of the race — from Beersheba in the Negev desert down to Israel’s southern tip of Eilat along the Red Sea.

The race will then transfer to Italy, and the island of Sicily, for an early rest day on Monday. The Giro will end in Rome on May 27.

“I am sure at some stage I am going to lose this jersey,” Dennis said, “but I won’t stop fighting for it till we finish in Rome.”