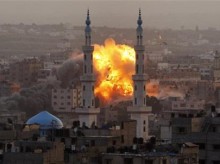 Smoke rises during an explosion from an Israeli forces strike in Gaza City. (AP Photo/Hatem Moussa)

JERUSALEM (AP) _ With pinpoint airstrikes on militant targets in the Gaza Strip and Iranian-made rockets flying deep into Israel, the current conflagration between Israel and Hamas reflects the vast changes that have taken place on the battlefield in just four years.

Israel, armed with precise intelligence and newly developed munitions, has carried out hundreds of surgical airstrikes in a campaign meant to hit militants hard while avoiding the civilian casualties that have marred previous offensives.

Hamas, meanwhile, has not been stopped from firing its new longer-range rockets that shocked Israelis by reaching the areas around Tel Aviv and Jerusalem for the first time, and has revealed a variety of new weapons.

This battle zone is the result of meticulous efforts by both sides to beef up their abilities since a three-week Israeli offensive in Gaza that ended in January 2009.

At that time, Israel inflicted heavy damage on Hamas. But the operation caused widespread damage to the civilian infrastructure and killed hundreds of civilians. The heavy toll drew heavy international criticism and war crimes accusations, despite Israeli protestations that the Islamic militant group was responsible by using schools and residential areas for cover. Thirteen Israelis also were killed in the fighting.

In four days of fighting, Israel has sought to hit clear militant targets — relying on painstaking intelligence gathered through a network of informers, aerial surveillance and other high-tech measures.

An arsenal of high-flying drones constantly hovering above Gaza provides a live picture of movements on the ground.

Other technological means used to avoid collateral damage include specially designed munitions with smaller blowback, a system of sending text messages and automated phone calls to warn residents to vacate areas ahead of strikes and stun explosives that are deployed to create large explosive sounds — to scare off civilians before the real payload is deployed against militants. The officials described the tactics on condition of anonymity because of the sensitive nature of the information.

However, the room for error is small. Of the 46 Palestinians killed in the current offensive, 15 have been civilians, according to Palestinian medical officials. In addition, more than 400 civilians have been wounded, the officials say. Israel knows that a single misfire resulting in high numbers of civilian deaths could quickly turn international opinion against it.

The results of the new Israeli tactics were illustrated at the outset of the offensive, when Israel assassinated Hamas’ military chief, Ahmed Jabari, in an airstrike in Gaza City.

In a black and white video released by the military, a car carrying Jabari moves slowly along a narrow road before exploding into flames, sending a large chunk of the vehicle flying skyward without injuring bystanders.

Since then, the Israelis have carried out hundreds of surgical airstrikes against weapon depots, launching pads and other targets. On Saturday morning, for instance, a massive airstrike flattened the headquarters of Hamas Prime Minister Ismail Haniyeh but caused little damage to buildings directly adjacent to it. Curious children quickly arrived to inspect the aftermath.

“Many of the targets that we targeted from the air were in very densely populated areas, sometimes they were even near U.N. facilities or schools or recreation centers,” said Lt. Col. Avital Leibovich, a military spokeswoman. “This leads us to develop and use very precise ammunitions in order to minimize casualties … they know Israel has a soft spot for civilian casualties. We have improved significantly in the area.”

Uzi Dayan, a former general and national security adviser, said Israeli intelligence has been tracking Hamas individuals and locations for years, waiting patiently for the opportune moment to attack.

“When you discover a place, you don’t strike it immediately. You track it, observe it and wait,” he said. “Over time, these targets add up.”

Another tool is recruiting informers. The task has become harder since Israeli forces withdrew from the Gaza Strip in 2005 and lost the immediate interaction with its assets. But the Shin Bet is still prolific in recruiting Palestinians imprisoned in Israel or those who travel to Israel for medical procedures.

Palestinians claim the Shin Bet often blackmails Palestinians into cooperating by threatening to expose details that would shame them or even get them killed at home.

Hamas’ military wing killed two Palestinians this week for allegedly providing Israel with sensitive information. One man was shot twice in the head. Another body was found tossed into a garbage bin with a gunshot wound to the head.

Defense Minister Ehud Barak said thanks to its intelligence Israel immediately destroyed most of the long-range missile threat against it. Still, Israel has been hit by more than 400 rockets in four days of fighting, including attacks against the Tel Aviv heartland and Jerusalem, some 80 kilometers (50 miles) away.

In several attacks, Hamas said it had unleashed for the first time the most powerful weapons in their arsenal — Iranian-made Fajr-5 rockets.

Israel’s inability to halt the rocket attacks, after days of intense aerial bombardments, reflects its limitations. Just as Israel has raced to improve its military tactics, Hamas and other armed groups in Gaza have built up their arsenals with large numbers of powerful weapons.

Once limited to crude projectiles manufactured in Gaza, Hamas has used smuggling tunnels along the border with Egypt to bring in sophisticated, longer-range rockets from Iran and Libya, which has been flush with weapons since Moammar Gadhafi was ousted last year.

Israel appeared stunned by the attack on Jerusalem, though a day later officials insisted they were aware of the weapon. Hamas said the M-75 missile was made in Gaza, with Iranian assistance.

The militants have also done a better job of evading the Israeli military by refraining from using mobile phones or two-way radios and moving frequently from one underground location to another.

In turn, Israel’s “Iron Dome” rocket-defense system has provided the country a defensive boost. The military says the system has intercepted nearly 250 rockets, including one heading toward Tel Aviv on Saturday.

The only Israeli deaths in the fighting so far were three civilians who officials said had ignored well publicized security precautions.