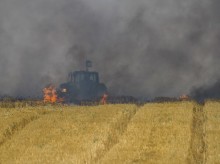 An Israeli tractor works to extinguish a fire started by a kite with an incendiary device launched from Gaza, in a wheat field of Kibbutz Mefalsim, near the Israel Gaza border. (AP Photo/Tsafrir Abayov)

KIBBUTZ NIR AM, Israel (AP) — After years of rocket attacks and militant infiltrations from Gaza, residents of southern Israel are now coping with a new kind of threat: incendiary kites and balloons that have damaged farmlands and nature reserves.

The crude devices launched by Palestinians inside the blockaded territory have not been lethal. But they have sparked fires that have damaged agriculture, killed wildlife and whipped up considerable indignation.

“It’s caused significant economic damage but more than that it is emotional,” said Itzik Ebbo, 78, a member of Kibbutz Nir Am, a collective farming community. “These are crops we poured our hearts into. These are fields we hiked with our children and grandchildren.”

Sullen locals have become a fixture on Israeli TV, guiding reporters around smoldering fields and lamenting the loss of life among snakes, turtles and the like.

The phenomenon is the latest twist in nearly three months of intermittent Palestinian border protests. To many Israelis the “kite terrorism” is yet more evidence of implacable — and creative — Palestinian hostility. But viewed another way it is a desperate ploy on behalf of the 2 million Palestinians largely penned into the impoverished seaside strip. A decade-old blockade imposed by Israel and Egypt to weaken Gaza’s ruling Hamas militant group has ravaged the local economy and caused widespread despair.

Israeli forces have killed more than 120 Palestinians and wounded over 3,800 since the protests began on March 30. Israel says it’s the only way to prevent mass breaches of the border that would include militants. But the vast majority of the Palestinian casualties have been unarmed, drawing heavy international criticism of Israel’s open-fire orders. Israel blames Gaza’s militant Hamas rulers for the bloodshed.

Drifting aimlessly over the border, the kites have caused more than 450 fires over the past month, torching some 7,000 acres (2,800 hectares) of land and causing some $2 million in damages.

Israel says it plans to deduct from tax funds it collects for the Palestinians to compensate farmers, and the military has been stepping up its measures in recent days by firing warning shots at launchers. Defense Minister Avigdor Lieberman vowed Monday that “kite terrorism cannot continue.” But Israel’s decision-makers must also consider the risk of sparking all-out war, as happened four years ago.

Israel accuses Hamas, a militant group that seeks its destruction, of using the protesters as cover in an effort to engineer violent infiltrations.

The current round of violence has yet to claim any serious Israeli casualties. Israel’s Iron Dome defense system has neutralized much of the rocket fire. A nearly-completed underground barrier and new technological means have thwarted or destroyed much of the Hamas tunnel network.

But Israel has struggled with the low-tech kites and balloons drifting over the border.

Gazans began flying kites with burning rags or cotton-stuffed cans attached to them several weeks ago and have since added helium-filled balloons with incendiary material attached. Aided by the hot and windy conditions, the devices have dropped in dry brush, destroying wheat and sunflower fields and sending animals scurrying away.

Palestinian activists argue such economic damage is not unlike that caused to them by the blockade.

The launchers seem to take pride in their project.

One of the leaders, an 18-year-old who asked to withhold his name for fear of Israel targeting him, said it started with bored teens flying Palestinian flags.

“We wanted to provoke the Israelis more, so we attached a burning rag to the kite. Thanks to God’s will, the thread was cut and the kite fell on the other side and started a fire. This is how we got the idea,” he said, adding that a kite only cost $1 to make and a balloon just 50 cents.

The military says drones intercept some 90 percent of the devices and it has also fired shots near kite launchers, targeting what it says are vehicles and Hamas posts used to launch the kites.

“These are not toys. These are dangerous weapons that are used in order to terrorize Israeli civilians,” said Lt. Col. Jonathan Conricus, a military spokesman.

Conricus would not comment on calls by hard-line government ministers to kill kite launchers on the spot, as Israel does to those firing rockets.

Meanwhile the fires rage daily. Terrain along the border is pockmarked with black spots of scorched hillsides and charred palm trees. In Nir Am, which abuts Gaza’s northeast border, the fires have inched dangerously close to adjacent train tracks and a gas station. Residents and visiting firefighting crews are on standby to deploy at a moment’s notice.

“Balloons and kites should be something fun, not something to avoid,” said Betty Gavri, 77.

In an effort to shift the narrative, kibbutz residents and their children recently floated colorful balloons and kites toward Gaza in what they said was a message of peace. They’ve also begun a replanting drive to replace the damaged fields. But Gavri is skeptical much will improve until larger changes in the region take place and the lives of Palestinians in Gaza improve as well. “I’m convinced that until they have something to lose there won’t be a big change on our doorstep,” she said.

Kobi Sofer, a ranger for Israel’s Nature and Parks Authority, said vegetation could rebound relatively quickly but it will likely take many years, if at all, for the entire ecosystem of plants, predators and prey to recover. Sofer says he has seen scorched porcupines, snakes, turtles, lizards and other rodents and insects, not to mention their feeding grounds. Touring the area, the only animals in sight were birds pecking at charred carcasses.

“All the years of rocket fire and military maneuvering never left anything like this,” said Sofer, a 17-year veteran ranger, as he gestured toward a scorched hilltop overlooking Gaza. “It’s a helpless feeling.”