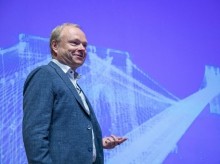 Over two autumn days, in a quiet New York University campus, Nokia took a glimpse into the future – highlighting the key technologies that will define the next era of advanced wireless communications.

The Brooklyn 6G Summit brought together around 250 of the most creative minds in the business for one of the most distinguished gatherings of the communications industry. Hosted by Nokia and the NYU Wireless research center, the summit included a series of keynote addresses, lively panels and physical demonstrations showcasing this year’s theme of “the path to 6G.”

Technology leaders laid out a vision for a future of digital-physical fusion and human augmentation, one that included the key deployment of cloud and edge computing, artificial intelligence and machine learning, advanced system-on-a-chip (SoC) design, the Internet of Things, virtual/augmented/extended reality and digital twinning. Topics discussed and analyzed included various elements of the Metaverse, sustainability, desegregation, system architecture and new spectrum and sensing technologies.

A major theme to emerge from the summit was the need for collaboration between industry, start-ups, academia and the regulatory community to make all this a reality. Nokia President and CEO Pekka Lundmark set that tone from the outset.

With a vision to have nearly every physical thing connected by 2030, the scope of the Metaverse was simply too vast for any single company to design and build all the elements it required, he said.

“No one can own the Metaverse, it needs collaboration to build it, to create solutions and value so that collectively we can solve the big, global challenges,” Lundmark said in his opening keynote at NYU’s Tandon School of Engineering.

This was echoed by leading operators, vendors, analysts and academics who participated, including representatives from DOCOMO, KDDI, SKT, Qualcomm, Microsoft, Bosch and others. The various talks and demonstrations drew a wide swath of customers, partners, engineers and innovators.

Igal Elbaz, the Network CTO at AT&T, for instance, said even though it arrived in the COVID era, 5G was the fastest growing “G,” taking only seven quarters to reach 250 million connections compared to the 19 quarters it took 4G.

6G is expected to show an even greater acceleration, as the onset of 5G-Advanced is quickly bridging the gap into that era.

The Brooklyn gathering has traditionally served as a harbinger for communication technologies, applications and services. It was even more so this year since while it was the 9th annual event since 2014, it was just the third to focus primarily on 6G and the first to do so in an in-person setting. That allowed Nokia and others to display a slew of live demonstrations of the latest access technologies, including subTHz/mmWave, integrated sensing and communication, Cloud and IoT, to name just a few.

“This was a flagship, one of a kind face-to-face 6G event after a three-year hiatus,” said Amitava Ghosh, a Nokia fellow and the co-organizer of this event, along with NYU’s Ted Rappaport, since its inception in 2014. “The attendees got an unfiltered view of what 5G/5G-Advanced and 6G technologies can do for humanity in the years to come.”

But before diving into the future, the summit also paid homage to the past. Lundmark, for example, acknowledged the architectural marvel that was the nearby iconic Brooklyn Bridge, which was the world’s longest suspension bridge when it first opened in 1883. He then imagined how it would come into existence in today’s world, musing about how its design, construction and maintenance would include elements as varied as autonomous underwater vehicles, 3D digital models, lasers and drones.

It was therefore fitting that one of the event’s highlights included another nod to the past with the granting of the Wireless Pioneer Award to groundbreaking scientist Leonard Kleinrock.

A VIP dinner reception on the Brooklyn riverfront overlooking the Statue of Liberty honored the famed UCLA professor for his pioneering work on the mathematical theory of packet networks. Kleinrock developed ARPANET, the technology that ultimately grew into the internet and which became the bedrock of the connectivity that underpins all of today’s Telecom technological advances.

“It was a source of inspiration to the next generation of technologists,” Ghosh added.