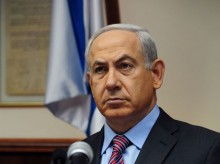 JERUSALEM (AP) —Throughout his long political career, Israel’s prime minister has earned a reputation as a tough talker. An ardent hawk who wrote a book about how to defeat terrorism, Benjamin Netanyahu has previously threatened to attack Iran, topple Gaza’s Hamas leaders and strike hard at Hezbollah guerrillas in Lebanon.

But only now, after seven years in power, he has finally pulled the trigger, unleashing an offensive to stop Gaza rocket salvos. The public and even his political opponents have all lined up behind him.

Barring a fiasco involving heavy Israeli casualties, the operation should help Netanyahu coast to victory in the upcoming Israeli elections.

While his more dovish predecessors have carried out daring military operations in the West Bank, Gaza, Lebanon and reportedly beyond, Netanyahu’s reign has surprisingly been categorized by restraint. Just a month ago, in a speech before parliament, he boasted that as prime minister, he “didn’t wage any unnecessary wars or any wars at all.”

The comments appeared to be a swipe at his predecessor, centrist Ehud Olmert, who launched two wars in his three years as prime minister between 2006 and 2009.

Despite his bellicose language, Netanyahu has proven to be a careful commander in chief, said political analyst Hanan Kristal.

For months, Netanyahu refrained from major retaliation against rocket attacks from Gaza against southern Israel. Kristal said he ultimately gave the order only after a public outcry and after making sure the top military brass supported the move.

Netanyahu claims he has never before had to act militarily, since his tough stance has deterred Israel’s enemies from testing him. Moshe Arens, Netanyahu’s onetime political mentor, said this time Hamas aggression toward Israel forced his hand.

“This wasn’t his decision alone to make. It wasn’t a matter of initiative, it was forced by reality,” said Arens, a former defense minister and foreign minister. “He’s a smart guy with lots of knowledge. He’s seasoned and prepared to handle the situation.”

Netanyahu has been burned by missions in the past.

In his first term in office, from 1996 to 1999, his most brazen operation backfired when two Mossad agents posing as Canadian tourists were captured in Jordan after trying to kill Hamas leader Khaled Mashaal by injecting him with poison.

Under international pressure, Israel was forced to send an antidote that saved Mashaal’s life. Mashaal is still the leader of Hamas, meeting in Cairo Monday with Egyptian officials about the Gaza conflict.

Netanyahu’s decision to open a tunnel beneath the Old City of Jerusalem sparked riots in which dozens of Israelis and Palestinians were killed. Opponents criticized him for not foreseeing the consequences of such an action in the region’s most sensitive spot.

Since returning to power in 2009, a more sober Netanyahu has sought a consensus for every major decision.

For example, Netanyahu reportedly ordered the military to go on high alert for a looming attack on Iran’s nuclear program two years ago, but he backed off following strong objections from senior security officials, according to a recent expose by a respected Israeli investigative news program.

This time the military is on his side. So is Barak, a former military chief who now serves as Netanyahu’s defense minister.

So far, the public has been overwhelmingly behind them. A Dialog poll published Monday in the Haaretz daily said 84 percent of Israelis supported the offensive, and 55 percent approved of Netanyahu’s performance, a big boost from his previous numbers. The poll surveyed 520 Israelis and had a margin of error of 4.4 percent.

With Israeli elections just two months away, Netanyahu was already far ahead in the polls. The Gaza offensive has boosted his numbers further. According to Monday’s Haaretz poll, Netanyahu’s Likud Party would be the largest party in parliament and would have no trouble putting together another ruling coalition.

Netanyahu’s political prospects are also improved because his main opponents have even less military background than he does and they have been running a campaign that focused primarily on economic and social issues, and now the focus has been shifted back to security.

Netanyahu’s position could still be precarious.

His popularity could take a beating if a ground operation goes awry or, alternatively, if he is perceived to have halted the campaign before reaching its goal—the end of rocket fire toward southern Israel.

Olmert’s approval numbers plummeted during the Lebanon war in 2006, when a ground operation produced large Israeli casualties and failed to stop Hezbollah guerrillas from firing rockets into Israel.

“You’d have to be a saint for these thoughts not to pass in the mind of a politician, and we are not dealing with saints here,” wrote Sima Kadmon, the Yediot Ahronot daily’s political columnist.

The Haaretz poll showed that 63 percent of Israelis rejected the notion that Netanyahu’s main motive for the attack was political, which may help explain why Israel’s notoriously rancorous political system has been largely supportive of the offensive.

“We are not criticizing him now because we are in a state of war and we want to win and restore quiet to southern Israel,” said Yoel Hasson, an opposition lawmaker from the centrist Kadima Party and a frequent Netanyahu critic. “When it comes to Hamas, there is no right and no left in Israel, no coalition and no opposition.”