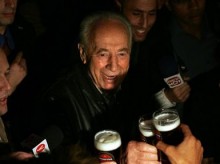 JERUSALEM (AP) _ It’s nearly midnight and Shimon Peres, clad in a fashionable black leather jacket, casually strolls down a sidewalk in downtown Jerusalem, the heart of the city’s nightlife. Like a rock star with groupies, he is followed by dozens of journalists and aides as he meets and greets the young partiers of the city.

This is grass-roots politics at its finest, but with a twist. Apparently, in order to court Israel’s young voters, the ruling Kadima Party decided to dispatch Israel’s oldest and longest-serving member of parliament.

For one night, Peres, who will turn 83 in August, was neither the former prime minister of Israel nor a Nobel Peace Prize winner. He was Peres the party animal. Bar-hopping between a half-dozen clubs and pubs, he mingled, threw down beers (he said Carlsberg is his favorite) and urged Israel’s young people to get involved in politics.

The organizers of last week’s pub-crawl said Peres was the obvious candidate to spearhead the “get out the youth vote” event.

“I always say I’m the second youngest person on the Kadima list,” said Yoel Hasson, who at 32 will likely be “the kid” among the party’s members of parliament after March 28 elections. “He (Peres) is the eternal youngster.”

Out on the town, it seemed that way. The beer flowed freely as Peres camped out on a bar stool or flopped on a couch, chatting up the young men — and flirting with the ladies. He moved on to the next stop only at the behest of his security detail and entourage, leaving behind a swooning crowd at each departure.

“He’s a legend,” said another.

Asked when he last partied, Peres devilishly snapped back, “I do this everyday,” drawing a laugh from the surrounding mass.

The old Peres charm was working overtime as he wooed potential voters, most of whom were a quarter his age. Outside one of the bars, a young woman nervously approached and introduced herself. Peres looked her in the eyes, gently held her hand in his palm and asked her name.

“It’s Reut,” she said. “You probably don’t remember, but I shook your hand once when I was a little girl.”

“I’m glad to see you’ve grown up, and grown up nicely,” he said, smiling.

Reut giggled shyly before grabbing her cell phone and excitedly updating a friend about the encounter. Another vote in the bag, it would seem.

On and on it went, bar after bar, patrons calling out his name and clinking their glasses against his. “Le’Haim,” Peres said, in his baritone voice — the Hebrew equivalent of “Cheers.”

Peres’ veteran political skills came in handy when he was faced with an ambush outside one of the bars. Some activists from the Labor party — which he left to join Kadima — gathered and mocked Peres, chanting the name of party leader Amir Peretz and calling for Peres to “come home.”

Some of the activists even reportedly handed out condoms with a picture of acting Prime Minister Ehud Olmert — head of the Kadima Party — and the slogan, “Olmert is screwing the youngsters.”

But even this didn’t phase Peres, who easily sidestepped the group, retaining his glow and moving on to a more favorable locale, his last of the evening: a wine cellar called Adom. As Peres sipped a glass of red wine, Yoram Dori, his closest adviser for 15 years, looked on in amazement.

Their day began before 9 a.m. at an event near Eilat, at Israel’s southern tip. An early-morning meeting was scheduled for the following day. As Peres walked out, Dolly Parton’s “9 to 5″ blared in the background. It seemed no tune could be less appropriate for the former prime minister.

Dori said Peres gets by with five hours of sleep a night — and wouldn’t have it any other way.

“He loves this, it’s his taste of life,” he said. “He’s young — there’s a chronological age and a mental age. Chronologically he is very old, but mentally he’s very young.”