Israel rocks – the comeback of the concerts By Aron Heller | ASAP/Blogging, Thursday, 15 Jun 2006 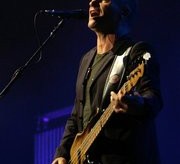 RAMAT GAN, Israel (AP) _   Some 20,000 frenzied fans sang along with Sting as he yelped out the familiar lyrics to one of his most famous songs.

“Whoa, I’m an alien; I’m a legal alien,” reverberated throughout Israel’s largest stadium, in this suburb of Tel Aviv.

Sting, of course, was referring to being an “Englishman in New York.” But he could have also easily been alluding to being an international rock star performing in Israel.

Nearly six years of bloody violence with the Palestinians has left Israel as a pariah in the international concert circuit, shunned by top performers who, in the past, had regularly flocked to its eclectic musical fan base.

This summer marks a revival. Besides Sting, Israel plays host to the Black Eyed Peas, Pink Floyd’s Roger Waters, Ziggy Marley, Depeche Mode and 50 Cent. The scope of artists would have been even more impressive were it not for the last minute cancellations of Ricky Martin and Kelly Clarkson.

The Black Eyes Peas got the party started on June 3, rocking Tel Aviv with a hip-hop extravaganza featuring the quartet’s top hits.

But it was the Grammy-winning band’s unexpected flattering banter that served as the ultimate morale booster for Israeli music fanatics who had suffered the long years in the musical desert.

“We’ve been here for five days,” front man Will.I.Am informed the masses, “and that’s been the best five days of our lives.”

He went on to compliment all aspects of the country, including “the most beautifullest women on the planet,” the leading Israeli daily Haaretz reported.

The Peas then broke out in a hip-hop version of the classic Jewish tune “Hava Nagila.”

Fergie, the Pea’s lead singer, called Israel “one of the most fun places on the planet.”

But it was Will.I.Am who sent the crowd ballistic when he said he might actually move to Israel.

“Y’see, I brought my mom and my grandma. You know, we’re Christian, but I think I’m gonna convert to Judaism,” he said.

Amos Harel, Haaretz’ military affairs correspondent, who oddly doubles as its hip-hop/rap critic, said the return of concerts to Israel was a direct result of the drop in violence and Israel’s improved image on the international stage.

The comeback of the concerts is just one of the many positive consequences of last summer’s withdrawal from the Gaza Strip. Israel, he said, is no longer perceived as a dangerous place to visit; once again, it is politically correct to rock in Tel Aviv.

“The fact that a bunch of big names are arriving, and not just one, is a very positive development after six years of drought,” Harel said. “It’s good that we are emerging from the ranks of the lepers.”

Not everything about the musical renaissance has been smooth, though.

Roger Waters has lent his support to a pro-Palestinian movement that urges the removal of the barrier Israel is building along the West Bank. The Pink Floydian has already relocated his scheduled gig later this month from a Tel Aviv park laid out for such events to a chickpea field next to a joint Jewish-Arab village in response to Palestinian protests.

“Your visit, and regardless of your intentions, will be viewed by Palestinians and many peace advocates as contributing to the deceptive image of Israel as a ‘normal’ state, thereby legitimizing its racism and colonial oppression,” the group wrote to Sting, in a statement released to the media. “In fact, we view every international artist, academic or intellectual, who visits Israel without condemning its illegal military occupation and colonization of Palestinian land as acquiescent in its oppression of the Palestinians.”

The musical migration to Israel began during the peacenik ’60s, when Jewish performers, such as Leonard Cohen and Bob Dylan, were drawn to the hippie Kibbutz culture to play their folksy tunes.

The real boom, however, arrived in the 1990s, following initial peace accords with the Palestinians, when Israel became a prime destination for music’s biggest shows. Madonna, Michael Jackson, U2, REM, Elton John, David Bowie, Guns N’ Roses and Metallica were just some of the stars to hit Tel Aviv, some drawing crowds as large as 200,000. Radiohead, then a relatively unknown British band, got its first break in Israel, warming up at one of the big concerts. Its single, “Creep,” became a number one hit in Israel long before going on to greater success in Europe and America.

The year 2000, with the outbreak of the second Intifada, was the year the music died. The Red Hot Chili Peppers were the first to jump ship, canceling a scheduled appearance because of security concerns. Former President Bill Clinton reportedly even asked the band to reconsider, to no avail.

In the passing years, thanks to the growing scope of MTV, and easy download access from the Internet, younger Israelis were increasingly exposed to the hottest new acts in music. But, the live element has been sorely missed.

Harel said he was hopeful the rocking summer of 2006, would be more than a brief interlude.

“So long as the security situation remains the same and the performers make good money, it will go on,” he said.