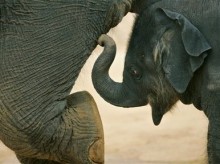 JERUSALEM (AP) _ Like most of its modern, conservation-friendly counterparts, Jerusalem’s Biblical Zoo is trying to save animals from extinction and reintroduce them into the wild. But that philosophy, referred to in zoological circles as the “Noah’s Ark paradigm,” takes on a special meaning here.

Most of the Biblical Zoo’s inhabitants trace their lineage to the great beasts who were mentioned in the Bible and who roamed the nearby hills and forests several thousand years ago.

“And the wolf shall dwell with the lamb, and the leopard shall lie with the kid,” reads the passage, from the book of Isaiah, just outside the enclosure of Max the Persian leopard.

And while the leopard hasn’t changed his spots (to paraphrase a different verse from the book of Jeremiah), the Biblical Zoo certainly has.

Established in 1928, it originally emphasized biblical animals as a means to introduce the park to an orthodox Jewish audience. But over time, the premise has become less religious and more scientific.

“We treat the Bible as the oldest book in the world that gives a comprehensive account of the natural world in the land of Israel,” said Shmulik Yedvab, the curator of the zoo.

Sitting on 62 acres of green, rocky, Jerusalem terrain, the Biblical Zoo has evolved into a cutting-edge research facility that has succeeded in reintroducing several animals native to the holy land, some of whom were thought to have gone extinct. It’s a challenge of almost biblical proportions.

Today, that means science projects the author of the Bible may not have intended — artificial insemination of elephants, birth control injections for giraffes and sperm counts for lions.

“Noah took the animals aboard an ark and saved them. Today that is not enough,” said Yedvab, 37. “The hope is that one day we will also be able to ‘reach the shore’ and release them to the wild but that doesn’t look likely … every minute, somewhere in the world, a species is going extinct.”

On Dec. 10, Gabi became the first successful birth of an artificially inseminated elephant in Israel, joining a select group of only a dozen or so such offspring in the world. Zoo veterinarians say the mischievous little guy is a perfectly healthy baby elephant, nursing around 15 liters of milk a day. Tamar, who was impregnated by a sperm flown in from a zoo in England, is said to be a wonderful mother.

Lyder and Liza, a pair of lions, were less fortunate in procreation; so Lyder underwent a sperm count test and Liza an ultrasound. On the other end of the spectrum, Shavit, the promiscuous giraffe, has been put on dart-injected birth control medication, to ensure a more sustainable giraffe population at the zoo.

While the zoo’s collection has expanded to include distinctly non-biblical species, such as kangaroos and penguins, the focus has firmly remained on the animals that hail naturally from the land of the Bible. The lions here are Asiatic, the brown bears are Syrian and the oryxes are Arabian. Animals such as cheetahs, who dashed wildly in Israel as recently as the 1950s, are featured prominently in the moated, barless exhibits.

But the pride and joy of the zoo are those projects that bring it most closely to its vision as a modern-day Noah’s Ark.

The Persian Fallow Deer, which is mentioned in the book of Deuteronomy and also as one of the delicacies served at the table of King Solomon, was thought to have gone extinct until a small group was discovered in Iran in 1956. In 1978, on the eve of the Islamic revolution, four of these deer were transferred to Israel and have since created a colony of several hundred. The Biblical Zoo recently initiated an ambitious reintroduction plan in the mountains surrounding Jerusalem.

Yedvab, for his part, said he was grateful just to be able to follow the progress of the animals from his home on the hilly outskirts of Jerusalem, as they tried to retrace the path of their biblical ancestors.

“My greatest thrill is when I wake up in the morning and see them living here and now in nature, just like they did back then,” he said. “There is nothing better than that.”