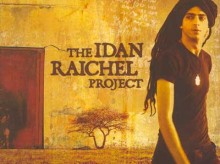 JERUSALEM (AP) – Israel’s hottest musical export these days is a dreadlocked composer who pioneered a unique blend of Israeli, Ethiopian, Yemenite and Latin music from a makeshift recording studio in his parents’ basement.

Raichel has already performed at the Sydney Opera House in Australia as well as in Hong Kong, Mexico City, Moscow and Singapore. He is currently wrapping up a six-city tour of the United States before heading to Europe.

The Idan Raichel Project usually performs with about a dozen people on stage at a time, but the band has some 90 revolving members from various backgrounds, singing primarily in Hebrew, Spanish, Arabic and Swahili and ranging in age from 16 to the 80s.

Besides its singular sound and style, the band is also unique in having, despite its name, no frontman. Raichel calls the project a ”big umbrella,” or a ”train station” for various artists who pass through to collaborate with him. ”I would say it is more a compilation than a band,” he says.

Though Raichel sings some of the project’s biggest hits, on stage he often sits quietly behind his piano. He compares his role to that of a movie director.

”Compare it to Woody Allen,” Raichel says. “Who cares if he is in his own films? You still know if it a movie by Woody Allen. Sometimes he is in it, sometimes not. Every song is a different scene of a film, and you take the lead singer that is the best frontman and actor for every scene.”

Raichel, 31, grew up in the middle-class town of Kfar Saba listening to music and learning to play the accordion. He spent his compulsory military service playing the piano in an army band. Like other soldiers, he was forced to sport a short military haircut. He hasn’t cut his hair since his discharge.

After shedding his uniform, he worked as a counselor at a school for troubled youth where he encountered Ethiopian immigrants for the first time. He immediately connected to their community.

In 2002, the Idan Raichel Project burst onto the Israeli scene. Its self-titled debut album was voted album of the year, and Raichel was selected singer of the year.

One of his biggest hits, Mi’Maamakim (Hebrew for “Out of the Depths”), begins to the tune of Nanu Nanu Ney, a traditional Ethiopian folk song.

Israeli crowds seem to embrace Raichel’s multiethnic, multilingual mix. At a recent concert in Jerusalem, some 3,000 youths cheered wildly through a two-hour performance, jamming against the stage and singing along in various languages.

Raichel’s die-hard international fans include R&B artist India.Arie; Rob Cavallo, the producer of Green Day, and the actress Natalie Portman. He insists his music is distinctly Israeli and calls it the current “music of the streets of Tel Aviv.”

Hebrew music has evolved from earnest paeans to the beauty of the Land of Israel and odes to the military. Today, except for a Mediterranean influence, Israeli popular music is more in tune with contemporary music worldwide.

Raichel has incorporated all of these streams. In many ways, he is a throwback to those early songs — which is why he is regarded by the music establishment as an authentic Israeli voice. He is further distinguished by his use of Amharic — a Semitic language spoken in Ethiopia — and other multiethnic influences, an unusual mixture he pioneered.

”He is one of the Israeli composers most in touch with the history of Israeli music, but it is also very pluralistic, very eclectic,” Harsonsky says. “It has something very poetic, original, unique and rich. There is something very exotic to his music.”

For many Israelis, the Amharic of Raichel’s music is the first they have heard, and his Ethiopian bandmates are the first Ethiopians they have encountered.

In Israel, Ethiopian immigrants have long been neglected, a downtrodden minority plagued by poverty, crime, violence and substance abuse. Raichel is proud that his band has made them cool.

”It is the first time you can listen in the mainstream radio to vocalists from Morocco singing in their own native tongue, to the great vocals of Ethiopia,” he says.

The project includes singers from Sudan, Uruguay, Columbia and Rwanda and also has featured Arab-Israeli singers. One of the songs on Raichel’s recently released third album Within My Walls is in Arabic. He says he hopes to one day perform in Damascus and include Syrian, Lebanese and Palestinians singers in his project.

”Artists in Israel are one of the most important ambassadors,” he says.