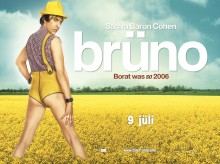 JERUSALEM — Bruno’s flamboyant sashay across the Middle East has succeeded in one thing – uniting Sacha Baron Cohen’s unwitting Israeli and Palestinian victims in their joint disdain for his latest comedic creation.

Bruno is an over-the-top gay Austrian fashionista with a Nazi streak whose goal is to become the biggest Austrian celebrity since Hitler. To do so he travels to America, where he is told he must take on a charitable cause to achieve worldwide fame. So he decides to bring peace to a troubled place he calls “Middle Earth.”

There, he nearly sparks a riot in an ultra-Orthodox Jewish neighborhood in Jerusalem when he struts down the street in a sexed-up Hassidic outfit that includes skintight shorts. On the Palestinian side, he tries to convince a West Bank militant to kidnap him, while giving the man condescending fashion tips. Bruno confuses the popular chickpea spread “hummus” with the Islamic militant group “Hamas” when he tries to bring together Israeli and Palestinian personalities to make peace.

Baron Cohen, an observant, Hebrew-speaking Jew with close ties to Israel, has ribbed the region before. In his 2006 movie Borat, his fake Kazakh language was actually Hebrew and his shtick was peppered with Israeli slang. In Bruno he goes a step further, taking aim at the Middle East’s most sacred cows.

The movie opened worldwide a week ago and became the top grossing film in the U.S. over the weekend. It’s making waves in Israel, too.

The locally shot scenes got big rounds of applause and hearty laughs at a recent Jerusalem screening. But the subjects of his pranks don’t seem to be in on the joke.

“This man, I think he is not a man,” said Ayman Abu Aita, a former member of the Al-Aqsa Martyrs’ Brigades, a militant group that has been largely disbanded. “He is not saying the truth about me. He lied.”

In their scene together, Bruno identifies Abu Aita as a “terrorist” and asks to be abducted.

Before Abu Aita has a chance to reply, Bruno suggests that the mustachioed man lose his facial hair. “Because your King Osama looks like a kind of dirty wizard or a homeless Santa,” he says before being kicked out.

In an interview with David Letterman, Baron Cohen, 37, said he set up the meeting in the West Bank with the help of a CIA agent.

Abu Aita’s Israeli-Arab lawyer, Hatem Abu Ahmad, denied his client has been involved in any acts of violence. He said he is preparing a lawsuit against Baron Cohen and Universal Studios alleging that the terrorist reference could get Abu Aita in trouble with the Israelis and the homosexual association could get him killed by Palestinians. “This joke is very dangerous. We are not in the United States, we are not in Europe. We are in the Middle East and the world operates differently here,” Abu Ahmad said.

The jokes apparently had their share of dangers for Baron Cohen as well. His production team said he narrowly escaped an angry mob during his prance in the ultra-Orthodox neighborhood of Jerusalem.

Jonathan Rosenblum, an ultra-Orthodox columnist, said he hasn’t viewed the scene but said the reaction was to be expected.

“It was offensive. It was meant to be offensive and it succeeded,” he said. “I don’t have any interest in going to the movie but I am sure it will have its fans.”

Yossi Alpher, a former Israeli Mossad officer, and Ghassan Khatib, a former Palestinian Cabinet minister, are apparently not among them.

In a panel Bruno holds with them in the movie, he tries to find common ground.

“Why are you so anti-Hamas? I mean isn’t pita bread the real enemy here?” Bruno asks with a straight face.

The dumbfounded interviewees look awkwardly at each other before taking the bait.

“You think there is a relation between Hamas and Hummus?” Khatib asks.

“Hummus has nothing to do with Hamas,” Alpher insists. “It’s a food. We eat it, they eat it.”

Both men declined comment for this article. But following the prank, Alpher published his account of the meeting in the Jewish publication The Forward in which he said he became suspicious when he saw Baron Cohen dressed in leather and studs, his face heavily powdered, and his arms and chest shaven.

In the movie, Bruno encourages the Palestinians to return the pyramids and asks Jews why they can’t get along with Hindus.

Among the nuggets not appearing in the movie but said nonetheless, according to Alpher, were: “Your conflict is not so bad. Jennifer-Angelina is worse” and “Vy don’t you Jews and Arabs settle the conflict with a time share on the land?”