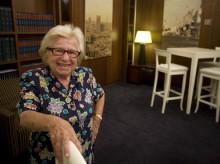 She’s researching the country’s tiny Circassian Muslim community for a PBS documentary. The work follows similar films she has made in recent years about other minority groups in Israel, such as the Bedouin, the Druse and the Ethiopian Jews.

It’s quite a contrast in subjects for the octogenarian sex guru. She says the projects have sparked her curiosity at a time when she has little new to add in the field that made her famous.

“I didn’t want to have to talk about the things that I knew already. I don’t have any new research. There is nothing new under the sun,” she said, in her immediately recognizable German-accented English.

But that doesn’t stop people the world over from stopping the 82-year-old, bespectacled, diminutive grandmother and widow with intimate questions about their own sex life.

“Sex is still the most interesting subject under the sun,” she said. “People will say my wife is too tired or my husband is too tired, and I listen and I say ‘go for help.’

“I want people to see me or read about me and think about sex,” she said.

The psychosexual therapist ushered in a new era of speaking openly about sexual matters with her call-in radio show, Sexually Speaking, in 1980. She quickly became a sought after speaker and has written 32 books, most about sex.

Ruth Westheimer would seem an odd choice to become an international sex icon. Born in Germany to an Orthodox Jewish family, she was saved from the Holocaust when her parents sent her to an orphanage. Much of her family perished in the war.

She immigrated to Israel as a teenager and was later seriously wounded fighting in the two-year war that followed Israel’s creation in 1948. She moved to the U.S. in 1956.

Israel is also where she says she had her first sexual experiences.

She’s a cult hero here as well. During her current visit, she appeared on morning TV talk shows conversing fluently in Hebrew: one of the four languages she speaks.

She said she raises the money for her documentary projects by promising donors “good sex for life.”

She still has a small practice in New York and teaches at Yale and Princeton universities and her most recent focus revolves around the internet, warning that social networking and other online tools are replacing real intimacy.

“It is a catastrophe, all of this virtual being together,” she said. “I think there are people who get hooked on the internet. If they need to look at explicitly sexual material to be aroused there is a problem … I am worried that the next generation will not be able to have a real conversation.”

She said it was all part of a trend of “more openness but less intimacy.”

Still, she takes pride in her role of improving people’s marriages by helping them improve their sex lives.

“There are less woman who haven’t heard the message that a woman has to take responsibility for her own orgasm,” she said.