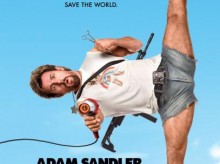 TEL AVIV — In Zohan Dvir, Israelis have a Hollywood hero — no matter that the soldier-turned-hairstylist played by Adam Sandler represents some of their country’s worst stereotypes.

“You Don’t Mess With the Zohan” looks to be a big hit in the Holy Land. Billboards bearing the leading man’s split-legged, blow-dryer-wielding image are plastered across city walls, and numerous stories have been written and broadcast in the local media, which has called it the “most Israeli film in Hollywood.”

The Zohan, as he’s known, is Israel’s most legendary commando. He can karate kick through walls, catch bullets with his teeth and outswim jet boats; he’s equally skilled in the bedroom. But after a while he tires of killing off terrorists and barbecuing nude with bikini-clad babes on the beach and longs for more meaning in his life.

“When will we have peace?” he asks his mother, played by the veteran Israeli actress Dina Doronne. “How much longer will we have to fight?”

Zohan doesn’t buy it, so he fakes his own death in dramatic fashion so he can re-emerge anonymously in Manhattan and fulfill his lifelong dream of becoming a women’s hairstylist. There he charms his way to success and discovers that Jews and Arabs can get along, before some ridiculous plot lines force him back to his aggressive ways.

Israelis didn’t seem too slighted by the not-too-favorable portrayal of them. At Wednesday’s premiere in Tel Aviv, the packed crowd burst out in ovation and laughter at each sighting of an Israeli actor and at each over-the-top cliché of their behavior — like when Zohan brushes his teeth with hummus, disco dances with a huge bulge in his pants or plays paddle ball with hand grenades.

“I wasn’t insulted at all. It was funny. Exaggerated, but funny,” said Guy Ben-Yaacov, 23. “Besides, I know a few guys like Zohan.”

Israelis involved in the film said the exposure could only be good for their country.

“I think it is almost a gesture toward Israel,” said Ido Mosseri, who plays Zohan’s pushy expat Israeli sidekick Oori. “I was a little worried because Israeli crowds are very critical, but I think they took it all in with love.”

Amir Kaminer, movie critic for the Yediot Ahronot daily, said Sandler’s Zohan is the most prominent Israeli character out of Hollywood since Paul Newman played the Jewish fighter Ari Ben Canaan in “Exodus” in 1960. But that’s where the comparison ends.

He said it was natural that Israelis were excited about the fanfare, but that the movie was “vulgar and stupid” and an inaccurate depiction of Israel.

“We’re not all about eating hummus, killing Arabs and fornicating. We do other things as well,” he said. “There has been a lot of water under the bridge between Ari Ben Canaan and Zohan Dvir.”

Once you get over Sandler’s atrocious attempt at an Israeli accent, the fact that Zohan isn’t even a real Israeli name and several other glaring loopholes, the film does raise some issues to which Israelis can easily relate.

Like Zohan, many young Israelis escape the country, at least temporarily, after completing their military service to go on lengthy backpacking trips through Asia or South America or to work odd jobs in American cities.

And in New York, for instance, young Israelis are commonly seen working as furniture movers or aggressively selling useless knickknacks.

Oddly enough, the concept for the “Zohan” movie evolved from a spoof of just such Israelis.

Two years later, Smigel followed it up with “Sabra Price Is Right,” starring Tom Hanks as a pushy Israeli game show host, Sandler and Rob Schneider as its presenters and Smigel as a cigarette-smoking announcer, all pushing shoddy electronics on hapless clientele.

With Schneider by his side, as usual, Sandler takes things a few steps further as Zohan. Armed with an Israeli entourage, an accent coach and an advisor named Eytan Ben-David, who happens to be a former Israeli soldier who now works in a hair salon in Los Angeles, he aims for an epic satire of the Israeli soldiers he used to admire as a Jewish boy. The result, however, is something more like Borat meets Austin Powers meets the Hebrew Hammer.

Shaanan Streett, frontman for one of Israel’s best-known hip-hop ensembles, Hadag Nahash, has four of his band’s Hebrew songs featured in the film. He didn’t mind the ribbing at all.

“I have no problem making fun of Israel, ’cause I think we are pretty damn funny,” he said. “A lot of Israelis think that Israel is holier than holy, but when things are not so sad here, they are actually funny. . . . It’s actually a step toward normality to make fun of us.”