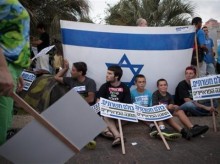 Israelis attend a rally in support of a new law to mandate universal conscription to the military in Tel Aviv. (AP Photo/Dan Balilty)

JERUSALEM—With just days left before a court-imposed deadline to reform Israel’s military draft law expires, the nation’s political leaders are at loggerheads on how to resolve what has become perhaps the country’s most pressing — and divisive — domestic issue.

The impasse over whether and how to scrap the mass exemptions from military service for ultra-Orthodox Jews has already cost Prime Minister Benjamin Netanyahu his largest coalition partner. With no obvious compromise in sight ahead of the Aug. 1 deadline, the issue has the potential to trigger the government’s collapse and lead to snap elections.

The debate over the exemptions cuts along the nation’s secular-religious divide. Israel’s secular majority, which is required to perform two to three years of compulsory service, widely resents the exemptions, while ultra-Orthodox leaders have been equally adamant in their refusal to compromise, claiming their young men serve the nation through prayer and study.

Earlier this month, Prime Minister Benjamin Netanyahu, who has vowed to find a resolution that will please all sides, dissolved a high-profile committee that recommended largely doing away with the mass exemptions. That prompted his largest coalition partner, the centrist Kadima Party that joined the Cabinet in May with the explicit goal of ending the exemptions for the ultra-Orthodox, to quit the government.

Netanyahu now has presented a watered-down alternative that doesn’t appear likely to be implemented either.

The current exemptions infuriate the general public, since almost all others are required to serve in the military. Meanwhile the ultra-Orthodox, who make up about 10 percent of Israel’s 8 million citizens, live off state subsidies in their insular communities.

A solution appears unlikely to be found by the Aug. 1 deadline. If nothing happens by then, some 60,000 ultra-Orthodox men of military age who currently enjoy exemptions will officially be considered deserters. But Defense Minister Ehud Barak also has the prerogative to issue emergency measures to maintain the status quo if he decides to do so.

Barak has said he would begin drafting an unspecified number of ultra-religious soldiers on that date and propose temporary legislation until a permanent arrangement is reached. Only 1,300 agreed to be drafted this year.

The draft privileges date back to the 1940s, when Israel’s founders exempted 400 exemplary religious students to help rebuild great schools of Jewish learning destroyed during the Holocaust. As the ultra-Orthodox have emerged as kingmakers in Israelis politics, they have blocked any reform initiatives — until Israel’s Supreme Court earlier this year ruled the current arrangement discriminatory and ordered an end to the exemptions.

The doomed committee, headed by Kadima lawmaker Yohanan Plesner, met for weeks and ultimately suggested that no more than 20 percent of ultra-Orthodox males, roughly 1,500 people a year, be granted exemptions, while others be permitted to defer service for no more than four years.

But Netanyahu rejected the recommendations, saying they were unlikely to win parliamentary approval, and tasked former military chief and current hawkish Cabinet Minister Moshe Yaalon from his own Likud Party with drafting an alternative.

Kadima quit the government last week after the sides failed to reach a compromise.

Yaalon, meanwhile, has presented a plan that would allow deferrals to continue till age 26 — when most ultra-Orthodox men already have several children. It also rejects personal sanctions against those who shirk service and includes a plan to draft Arabs into the military or alternative community service.

Netanyahu said the proposal will “gradually increase the number of those who serve, among the ultra-Orthodox and the Arabs, without setting public against public.”

“This will be a realistic change that will be possible to implement, and not an empty move the goal of which is to grab headlines. We will give more to those who serve and less to those who evade,” he added.

But the new proposal almost immediately drew a cascade of criticism from opposition and social activists alike.

Kadima leader Shaul Mofaz, now head of the opposition after leaving the government, charged Netanyahu with cowardice and “choosing those who evade over those who serve.”

Officially, ultra-Orthodox leaders insist on maintaining the sweeping exemptions, for fear of assimilation in a largely secular military. But parliamentary officials say that in private meetings they have shown some willingness to compromise. The officials spoke on condition of anonymity because the meetings were closed to the public.

For his part, Netanyahu has pledged to “enact a historic change,” but at the same time appears reluctant to alienate the ultra-Orthodox community that has traditionally supported him.

“The Netanyahu government has decided to prefer its ultra-Orthodox, anti-Zionist partners over the vast majority of the public,” said Uri Regev, a rabbi who heads the religious equality group Hiddush. “It is determined to miss the historic opportunity to share the national burden and deal a catastrophe to the national economy and national security.”