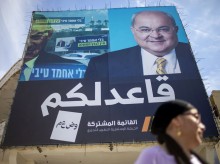 TIRA, Israel (AP) — A surge in Arab voter turnout was key to depriving Prime Minister Benjamin Netanyahu and his nationalist allies of a parliamentary majority in this week’s Israeli election.

Undercutting Netanyahu’s ambitions was celebrated as sweet payback in the nearly 2 million-strong minority that the hard-line leader had relentlessly tried to tarnish as disloyal to the state.

An Arab-led alliance of parties is sending more lawmakers than ever to the new parliament, giving them unprecedented leverage to deliver results for their constituents and potentially transform Israel’s electoral politics for years to come.

Looking to galvanize his nationalist base, Netanyahu lambasted Arab lawmakers during the campaign as terrorist sympathizers who advocated for Palestinian interests and were a danger to the country. But the harsh rhetoric, coupled with concern over President Donald Trump’s Mideast plan and other legislation deemed discriminatory, seems to have backfired by energizing Arab voters.

“He’s a little racist and talked trash about Arabs, Arabs, Arabs. He talked dirty, and we showed him what Arabs can do,” Mahmoud Hazkiya, a 31-year-old salesman in the central Israeli town of Tira, said with a smile. “Arabs are interested now, and we are not getting what we deserve.”

Breaking out of years of political apathy, nearly 65% of Israel’s Arab citizens voted in Monday’s election — up from 59% in the September vote and 49% last April. It marked the highest Arab turnout since 1999.

With mergers among the Jewish-led leftist parties leaving their Arab candidates out of reasonable slots for parliament, Arabs rallied around the Joint List, with 88% casting their ballots for the umbrella group.

Together with a projected 20,000 Jewish votes, the list surged to an all-time high of 15 seats, emerging as the third largest party in parliament, trailing only Netanyahu’s Likud and Benny Gantz’s centrist Blue and White. More significantly, it secured a 62-58 majority for the anti-Netanyahu forces in parliament and blocked Netanyahu, who had initially declared a “great victory” after Monday’s vote, from establishing the hawkish government he wanted.

“The Joint List is here. The Arab public is here. We forced everyone — because of our power, because of our public that granted us power — to treat us as an important and decisive factor,” lawmaker Ahmad Tibi told Israel’s Army Radio Thursday. He said the two additional seats picked up by the Joint List from September’s election prevented Benjamin Netanyahu from getting a 61-seat majority.

Tibi featured prominently in Netanyahu’s campaign as a symbol of the supposed illegitimate partners that Gantz would need for a coalition. Likud’s main campaign slogan was: “Without Tibi, Gantz has no government.” Tibi gleefully noted that it was now Netanyahu who had no government without Tibi.

Even so, he refrained from endorsing Gantz for prime minister after the former military chief ruled out a partnership with the Joint List. If Gantz and the Joint List can’t resolve their differences, Israel could be looking at the prospect of a fourth consecutive election later this year.

Israel’s Arabs, who make up about 20 percent of the country’s 9 million citizens, have largely been marginalized politically since the founding of the state in 1948.

The Jewish establishment, leery of including those it perceived as identifying with the country’s adversaries, kept Arab-led parties out of government. Arab leaders also insisted they had no interest in joining a government for fear of legitimizing Israel’s military occupation of Palestinian areas or being perceived as condoning military operations against their Palestinian brethren.

But a younger generation more comfortable with a dual Israeli-Arab identity and demanding solutions to everyday domestic issues has been far more eager to have a voice.

Polls show an overwhelming majority of Arab citizens want their leaders to focus more on reducing crime, improving infrastructure and addressing a housing crunch and discrimination rather than focusing exclusively on the Israeli-Palestinian conflict.

“Yes, there is a connection to the Palestinians. But at the end of the day we live in a country where you need to take care of yourself and then you can take care of others,” said 33-year-old Zidan Hazkiya, the salesman’s cousin. “We need a good future for our children: employment, education and many other things to move forward in life.”

In Tira, a town of 25,000 people known for their warm relations with nearby Jewish communities, the 72.5% turnout was even higher than the national average. More than 96% of the votes went to the Joint List.

Part of the motivation derived from deep-seated anger over a law passed by Netanyahu’s government in 2018 that declared Israel to be the nation-state of the Jewish people and which Arabs believe codifies discrimination. Another was the suggestion in Trump’s recent Mideast plan that densely populated Arab communities in Israel be added to a future Palestinian state.

But mostly it seems to reflect the Arab minority’s increasing desire to take a more active role in shaping the country.

“The more seats we get, the more power we will have,” said Fadila Maha, a 48-year-old mother of five. “God willing, if there are elections again they will get not 15, but 20.”

Arik Rudnitzky, an expert on Arab society at the Israel Democracy Institute think tank, said the unified message by the Joint List’s different factions played a key part in convincing Arabs their votes would matter.

“There was optimism in the air. They felt that their representatives aren’t busy with their own rivalries and were concentrated on one goal,” he explained. “The public wanted to prove that ‘we are citizens of the state and you cannot just treat us as temporary or tentative citizens.’”

They still have a long way to go. On Wednesday, Netanyahu all but said their votes don’t count when it comes to the tricky arithmetic of resolving Israel’s third inconclusive election in less than a year. Scrawling his analysis of the election results on a board, he jotted down 58 seats for what he called the “Zionist right” and 47 for the “Zionist left.”

The Joint List, he said, “is obviously not part of this equation.”

But even that slight didn’t damper enthusiasm on the Arab street after their historic achievement.

“We voted for change,” said Amir Abu-Het, a 39-year-old restaurant manager. “Netanyahu is more of the same, but now we have more power to move forward.”