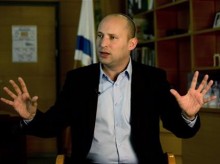 JERUSALEM (AP) — With the Israeli prime minister under fire internationally for his hard-line policies, a key partner of Benjamin Netanyahu is standing firmly behind him ahead of the March parliamentary elections — heralding what could be an even tougher stance toward the Palestinians if the two sit together in the next government.

Naftali Bennett, leader of the Jewish Home party — a lynchpin of Israel’s nationalist right that takes an even tougher line toward the Palestinians than Netanyahu’s Likud — told The Associated Press that the Palestinians should lower their expectations and forget about statehood.

“We are not going to give up more land. This approach has failed,” says Bennett, who is angling to become defense minister as part of the next coalition government if Netanyahu prevails in the March 17 vote. “Now, if it means that the world will penalize us, that is unfair but so be it.”

“I think the world right now is trying to twist Israel’s arm into committing a huge mistake that would damage our own future,” Bennett said.

While critics attack Netanyahu for resisting concessions to the Palestinians and being combative with the United States, Bennett insists the prime minister has not gone far enough. He said Netanyahu has embraced dovish policies by agreeing in principle to a Palestinian state, temporarily freezing West Bank settlement construction and releasing convicted Palestinian murderers in prisoner swaps.

Bennett defiantly rejects the premise that Israel is to blame for the failed Middle East’s peace talks and doesn’t hesitate to speak bluntly — the next government should build more settlements and solidify its control over territory sought by the Palestinians, he said.

“We have a problem in the Arab world, which is getting more and more radical. Throwing them (the Palestinians) pieces of Israel’s land and hoping that will satisfy the radical Islamist beast won’t do it.”

Such fiery rhetoric has helped turn the 42-year-old Bennett into one of Israel’s most popular politicians. He has revolutionized Israel’s previously staid religious right with charismatic leadership that has drawn support not only from its natural hard-line settler constituency but also from centrist, secular Israelis.

A son of American immigrants who served as a military commando and made millions in the high-tech world, Bennett has broadened his public appeal so much that early polls showed his party garnering nearly as many seats as Netanyahu’s Likud. That support, however, has dipped recently to the current level of 12 seats in the 120-member parliament, half the amount projected to go to Likud.

The drop has ended talk that Bennett could be poised to become Israel’s first Orthodox Jewish prime minister, and for now, he is vowing to stick by Netanyahu, despite a history of bad blood between them.

Bennett was highly critical of what he considered to be Israel’s soft response to the Palestinian militant Hamas group in last summer’s Gaza war. The war killed more than 2,200 Palestinians, most of them civilians, while 72 people were killed on the Israeli side, according to U.N. figures.

After serving in an elite commando unit, Bennett co-founded an anti-fraud software company that was sold in 2005 to U.S.-based RSA Security for $145 million. He then turned to politics and served as Netanyahu’s chief of staff for two years.

They parted ways after a mysterious falling out, which Bennett refuses to discuss but which is widely believed to be linked to Netanyahu’s wife, Sara, who wields great influence over the prime minister’s inner circle. He also served as chairman of the West Bank settlers’ council, though he does not live in a settlement himself.

Netanyahu has at least once threatened to fire him for insubordination but the confrontations have only increased support for Bennett.

A master of social media, Bennett has released a series of YouTube clips that try to cast him as cool. In one video, he dresses up as a bearded Tel Aviv hipster, apologizing for every misstep before removing his costume and introducing his catchphrase: “Enough apologizing already.”

Bennett’s office reflects his diverse background. A family photo with his four children is next to one of him in uniform, holding an assault rifle. The bookshelf displays a Bible along with travel books and a hardcover about Albert Einstein, while a pair of dumbbells lies on the floor.

Bennett claims that Israel’s 2005 withdrawal from Gaza only brought rocket attacks against it. Therefore, he argues, Israel should annex the roughly 60 percent of the West Bank currently under its full control and offer economic cooperation to Palestinians — instead of independence.

Such a move would infuriate both the Palestinians and the international community. With the Arab population expected to soon outnumber the Jewish one, it also could endanger Israel’s future as a Jewish country. But Bennett is unfazed. “What I am suggesting is a different path, it’s a tougher one but it’s the right one,” he said.

“Let’s make their lives better,” he said of the Palestinians. “If we can do that for a few years, I think the world will see that we are actually making progress as opposed to just talking.”