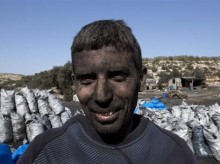 Palestinian laborer Sami Abu Baker, 35, who has a fifteen years service in the charcoal factories, poses for a picture during a day work, in the West Bank town of Yabad. (AP Photo/Nasser Nasser)

YABED, West Bank (AP) — For years, residents of central Israel have been complaining about air pollution from Palestinian factories in the nearby West Bank. Now that authorities have finally cracked down, shutting a group of the worst offending charcoal plants in one notorious town, Palestinians complain that hundreds were thrown out of work by their military occupiers.

The story of the northern West Bank town of Yabed, and its now-idle collection of charcoal plants, illustrates how for Israelis and Palestinians, Middle East politics seems to permeate the most basic elements of daily life, whether it be education, construction or sports. The environment is no exception.

In Israel, factories face close environmental oversight, but in the semi-autonomous West Bank it’s far trickier. For instance, the home of the Palestinian charcoal industry in Yabed is located in what is known as “Area B,” a category of territory that under interim peace accords falls under Palestinian civil authority — but where Israel retains security control, as in most of the West Bank’s area.

After years of failed dialogue with the local Palestinian leadership, Israel’s military took matters into its own hands in November, shutting down more than a dozen factories and confiscating equipment and 160 tons of wood that was to be used to produce charcoal.

Maj. Gen. Yoav Mordechai, who heads COGAT, the defense body responsible for Palestinian civil affairs, said it was a matter of public health that “harms both Israelis and Palestinians alike.”

But that’s not how it was received in the West Bank, where workers called it an oppressive measure that curried favor with Jewish settlers and violated previous agreements with the Palestinian Authority, a claim Israel denies.

Mostly, though, Palestinians bemoaned the closing of an industrial site that had been operating for 50 years, with some 15 factories that provided employment for about 1,000 workers.

“We are done. We cannot bring a piece of wood here,” said Mahmoud Abu Baker, a 41-year-old owner of one of the factories. “We are losing our business and we have no alternative.”

Abu Baker said he used to run 30 workshops, of which 80 percent of his product was sent to Israel, but now he had nothing left. The shutdown comes as unemployment has risen to an official figure of 18 percent in the West Bank. Even those who do work tend to earn a few hundred dollars a month, a fraction of the average salary in Israel.

Yael German, an Israeli lawmaker and former health minister who has advocated against the pollution, said she was saddened at the job losses but noted Israel faced similar concerns when shutting down factories that laid off Israeli laborers too. But she said health concerns had to prevail, particularly with pollution the World Health Organization says has a direct link to cancer and other illnesses.

“There are always conflicting values and it is painful to see people harmed,” she told The Associated Press. “But you cannot allow factories to pollute and break the law … if we choose to have a healthy society there is a price to pay.”

Charcoal in Yabed is still made the old-fashioned way, with wood built like a pyramid and covered with a layer of hay followed by a layer of earth. The workers light the wood from an opening in the top and leave it burning slowly. After 15 days, they cover it with earth until it is turned into charcoal, which is later mostly used for barbeques and water pipes.

They then collect the charcoal and package it without any protection tools, like air filters, often breathing in plenty of black dust. The face of Mohammed Baker, 55, for instance, was stained with black spots. But he was more concerned about his livelihood. “If I lose my job here, I won’t find any other job,” he said.

Mordechai said a quarter of Yabed’s children and 70 percent of those in the charcoal industry have reported some form of respiratory illness. He vowed that Israel would engage in “dialogue with the charcoal producers to find technological solutions to lower the risks of charcoal production for workers and residents.”

COGAT spokeswoman Hadar Horen said Mordechai has held meetings with residents. She said he hopes to find a way to reopen the factories under healthier conditions. She also said that Israel has granted thousands of work permits for Palestinian laborers, and that villagers were encouraged to apply for them to find alternative jobs.

The Palestinian laborers are skeptical the Israeli overtures are genuine. Many even dismissed the health scare altogether.

“I’ve been working in the charcoal industry for 27 years, and I have no health problems at all,” said Jaser Yacoub, 42. “The government makes us do a health checkup for all workers here and they proved we were healthy.”

Tali Naim, a 42-year-old Israeli mother of three from the nearby city of Kfar Saba, a few kilometers away inside Israel proper, found that hard to believe. She said that even from a certain distance she often has to keep her children indoors because of the black plumes of smoke wafting in her direction. She said the stench affects her quality of life in ways ranging from not being able to hang her laundry outdoors to occasionally having teary eyes and a sore throat. Her kids often wheeze in gym class because of it, she said.

“I think if they (the Palestinians) thought about it, they’d realize they would also be healthier without it. I mean they are right next to it,” she said. “I know it is a source of income, but it is so dangerous. It’s as much a pity for them as it is for us.”