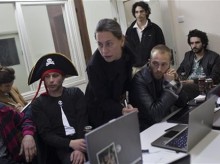 JERUSALEM (AP) — Shiver me timbers! Israel’s newest political party has more than a platform — it’s got a plank.

The Israel Pirate Party is one of 34 lists competing in the country’s Jan. 22 parliamentary election. While only a dozen or so have a realistic chance of getting elected, many Israelis fed up with existential issues like the conflict with the Palestinians and possible war with Iran are seeking sanctuary with some of the quirkier parties.

It’s a regular ritual in Israeli politics. In addition to the usual battles between parties representing doves and hawks on the one hand and secular and Orthodox Jews on the other, each election season typically offers an array of obscure and offbeat lists.

Previous offerings have included a faction calling for the establishment of a national casino and a group led by a fishmonger and puppeteer that tried to abolish bank fees. Green Leaf has made several runs for parliament looking to legalize marijuana, and in the 2009 election an offshoot of that party aligned with elderly Holocaust survivors in one of the oddest mergers in Israel’s mottled political history. It too fell far short of making the house.

This time around, a castaway from the marijuana-Holocaust party has drifted even further off shore, offering a “pirate” platform that promotes a variety of personal freedoms, including the right to plagiarize and sail the high seas.

The main chance for niche parties to make a splash is just before the election, during a two-week TV ads campaign. Since all registered parties receive government advertising subsidies, even the most marginal movements can get air time. All the party commercials are concentrated in a single nightly segment on TV.

The pirates, though, got off to a head start. The party’s 33-year-old, ponytailed leader, Ohad Shem-Tov, showed up at parliament to register the party earlier this month wearing a scarf on his head and a hook on his hand. This is the same mate who won notoriety in Israel for heading to Gaza on the eve of Israel’s 2005 withdrawal and recommending that settlers prepare for their impending forced evacuation by rolling up a joint and relaxing.

Accompanying him, skull in hand, was one of his hearties, who identifies himself — with proper pirate inflection — as Noam Kuzarrr. He sported long black hair and an impressive “blackbeard.”

No. 5 on the party list, Rafram Haddad, spent five months in Libyan captivity facing espionage changes before he was released in 2010 in a secret deal that intermediaries brokered between Israel and since-deposed Libyan leader Moammar Gadhafi.

“We are not in favor of hijacking ships,” clarified Dan Biron, a former TV director who owns a Jerusalem bar and is placed third on the party’s list. “You can say what we are offering is on the verge of utopia.”

The Israel Pirate Party is part of a global pirate political movement established in Sweden in 2006, operates in 45 other countries and has sent members to legislatures in countries including Germany, Finland and Tunisia.

Influenced by Hollywood blockbusters like “Pirates of the Caribbean,” the West largely has a romanticized vision of piracy. Aficionados have even established a mock holiday, designating Sept. 19 as “Talk Like a Pirate Day.”

Elsewhere in the world, piracy is no laughing matter. In Somalia, modern-day pirates have hijacked merchant ships in recent years, holding hundreds hostage at a time and demanding hefty sums as ransoms. Some hostages have been killed.

Israel’s election system is proportional. The 120 seats in the parliament are divided among the parties according to how many votes each receives nationwide. Parties need to draw at least 2 percent of the general election vote to win representation, equaling roughly 70,000 votes. The pirates’ crew appears to be a bit bare-bone: Shem-Tov said the party currently has only about 200 mates.

They are not the only long shots in the race. Other parties this time include a fringe anti-Zionist rabbi who’s trying to bring secular Jews back to religion, a joint party of Ethiopian and Indian Jewish immigrants and a charismatic Hassidic movement famous in Israel for blasting religious rock music out of vans and starting impromptu dance parties on the streets.

Most pollsters give these parties no chance of getting enough votes to enter parliament, so off to Davy Jones’ Locker they go.

However, Israel does have a history of protest parties pulling off election upsets. In 2006, a group of retirees led by an octogenarian former spymaster captured seven seats and joined Prime Minister Ehud Olmert’s Cabinet. Seen largely as a recipient of protest votes against the system, it disappeared in the next election in 2009.

The pirate party grants equal power to its three central bodies: the dozen captains on “the command bridge,” the 120 sailors on “the deck” and the entire pirate nation aboard “the ship.” Elected representatives answer to online referendums, a concept these marauders like to call “liquid feedback.”

“Dressing up is a gimmick, it’s a way to draw attention,” Shem-Tov admits. “But this party is serious, even if we use a little humor and do it with a smile.”