Ahead of draft, ultra-Orthodox soldiers in Israel under fire By Aron Heller | Religion, Wednesday, 17 Jul 2013 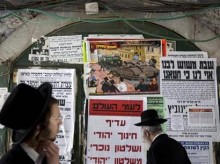 JERUSALEM (AP) — The Israeli soldier was walking home on a busy Jerusalem street when suddenly a car stopped next to him, and men inside spat upon him and hurled insults, trash and water bottles. When the assailants stepped out, he was fearful enough to call the police who swiftly arrived to rescue him.

The assailants were members of his own community — ultra-Orthodox Jews, outraged that he chose to serve in the military. Ultra-Orthodox males have long avoided military service, but with the government ending a contentious 65-year-old system of draft exemptions, a small number of them who do serve in the army are being branded as collaborators and increasingly face harassment and assaults by extremists.

“I’m afraid of wearing my uniform. Even with a weapon, I am helpless. There is nothing I can do,” said the soldier in last Thursday’s incident, who only identified himself by his first name, Israel, for fear of further retaliation from extremists. “This is the beginning of a phenomenon that we don’t know how it will end.”

The issue of army service is at the core of a cultural war over the place of ultra-Orthodox Jews in Israeli society. The ultra-Orthodox, who make up about 8 percent of Israel’s 8 million citizens, have largely been allowed to skip compulsory military service to pursue their religious studies. Older men often avoid the workforce and collect welfare stipends while continuing to study full time.

The system, which is the result of religious parties’ historically disproportionate political power in parliament, has caused widespread resentment among Israel’s secular majority. The issue figured prominently in January elections and propelled the secular Yesh Atid Party into the government.

Last week, Israel’s Cabinet approved a Yesh Atid plan to gradually end the automatic draft exemptions to ultra-Orthodox seminary students and require all to register for service. Yaakov Peri, the minister who headed the drive, called the proposed legislation historic, telling The Associated Press that it takes into consideration “the importance of learning the Torah and the obligation to serve in the army.”

Ultra-Orthodox rabbis vehemently oppose the plan, saying the military and immersion in mainstream society will expose their youth to secularism and undermine a pious way of life that has kept the Jewish people alive through centuries of persecution. They insist their young men serve the nation through prayer and study, thus preserving Jewish learning and heritage.

Leaders of the community, who in Hebrew are known as “Haredim,” or “those who fear” God, say their followers would rather sit in jail than join the military. They charge their ancient brand of Judaism is under siege and warn of an uprising if parliament approves the draft plan.

“The main problem here is that we are those being blamed instead of those blaming,” ultra-Orthodox lawmaker Israel Eichler told Channel 2 TV. “If the law passes, it will be a declaration of war.”

Some 3,000 Haredim soldiers, who volunteered to join, are already serving, according to the military. Thousands more are expected to be drafted in the coming months if the legislation passes.

Among ultra-Orthodox extremists, the war has already begun with a violent campaign against those in service. A handful of Haredi soldiers have been accosted the past two weeks. Activists have posted banners denouncing them and have even set up a phone hotline so people can snitch on those they know are serving or they have seen in uniform.

The atmosphere has become so charged that ultra-Orthodox soldiers say they shed their uniforms before heading home.

In Jerusalem’s hardcore bastions of ultra-Orthodox Jewry, there appears to be room for only one type of uniform — the traditional black-and-white garb donned by the hard-line observers.

In the neighborhood of Mea Shearim, a large cartoon poster depicts Haredi soldiers rolling through the streets atop tanks trying to lure young boys onto their vehicles. The ad denounces the soldiers as Zionist “ambassadors” and “missionaries.” Soldiers in sidecurls have been coined the insulting nickname “Hardak” — a combination of Haredi and insect.

“They disgust me,” said Shimon Gutfarb, a 25-year-old father of three. “The army is a melting pot. The fear is that our youth will go rotten … They (the soldiers) abandoned their traditions. They represent the opposite of our lifestyle.”

Many ultra-Orthodox sects are anti-Zionist, refusing to recognize Israel since they say there cannot be a Jewish state until the coming of the Messiah.

The battle over the draft law is part of a larger cultural war gaining steam in recent years. Due to its high birthrate and the relatively low participation in the workforce, the Haredi community suffers from high unemployment and poverty.

Voices have begun to emerge criticizing the ultra-Orthodox education system, which teaches students about Judaism but very little math, English or science. More than a quarter of all Israeli first-graders are ultra-Orthodox and government statistics project that if these trends continue, the ultra-Orthodox could make up 15 percent of the country’s population by 2025.

But the tide has begun to turn. The new education minister from Yesh Atid has already taken moves to force them to adopt a core curriculum or lose government funding.

According to official Israeli figures, the number of ultra-Orthodox men and women who now work has begun to creep up in recent years. Haredi employees are increasingly finding work in the country’s booming high-tech industry. This trend shows the community is far from the homogenous mass viewed by outsiders.

Shlomo Trachtman, a 25-year-old Haredi who calls himself “an Israeli patriot,” says those who don’t study scripture full-time should serve in the military.

“There is a culture war going on,” he said, and he referred to his own neighborhood of Mea Shearim as “the height of extremism.”

“I’ve seen soldiers called Nazis here. It’s hard to join the army in such an environment.”

Avi Lotan, who witnessed an assault on a soldier on Sunday, said it’s best for Haredim in the army to lie low. “Whoever attacks them is insane,” the 25-year-old said. “But in the meantime I recommend they stay away.”

Peri, of Yesh Atid, who serves as science minister in the government, said he has met with dozens of religious leaders and though they are obliged to say publicly they are against the plan, they know a majority of their followers wants to serve.

“It is in the interest of both communities, the secular one and the Orthodox one, to reach a kind of balance in which everybody will serve,” he said.

Defense Minister Moshe Yaalon said “we must not allow violent thugs to threaten the safely of young Haredim who chose to join the army.”

Changing the ways of the ultra-Orthodox will not be easy.

Leaders insist that study in religious seminaries is no less important than military strength in protecting the country from modern threats in a hostile region. Meanwhile, secular Israelis who voted Yesh Atid into power are growing impatient and demanding results. A clash seems all but inevitable.

“The Haredi community is in crisis regardless of the draft issue,” Yoaz Hendel, a former top aide to Prime Minister Benjamin Netanyahu, wrote in a column for the Yediot Ahronot daily. “Over time, you cannot maintain a community that is (financially) supported by everyone else. There is no religious justification for it and there is no precedent for it in the history of the Jewish people.”