Abramovich is latest Russian oligarch to move to Israel By Aron Heller | Associated Press, Tuesday, 29 May 2018 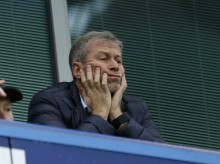 JERUSALEM (AP) — The sudden immigration to Israel of Russian billionaire Roman Abramovich makes him the latest in a string of Jewish Russian oligarchs who have made a home in the country in recent years.

Abramovich received his Israeli citizenship Monday upon arriving in Israel on his private jet, immediately becoming the country’s richest person, with an estimated net worth of more than $11 billion. Israel grants automatic citizenship to anyone of Jewish descent.

The Chelsea football club owner made the move after his British visa was not renewed, apparently as part of British authorities’ efforts to crack down on associates of Russian President Vladimir Putin.

Britain has pledged to review the long-term visas of rich Russians in the aftermath of the March poisonings of Russian former spy Sergei Skripal and his daughter in the English city of Salisbury. Britain blames Russia for the pair’s exposure to a nerve agent, an allegation Moscow denies.

The poisonings sparked a Cold War-style diplomatic crisis between Russia and the West, including the expulsion of hundreds of diplomats from both sides. Britain’s then-Home Secretary Amber Rudd said in March that the British government was reviewing Tier 1 investor visas granted to about 700 wealthy Russians.

The British government said it would not comment on individual cases, including Abramovich’s. Prime Minister Theresa May’s office said visa applications from Russia are dealt with “rigorously and properly.”

It’s not clear yet how much time Abramovich will spend in Israel. He owns an upscale home in the trendy Neve Tzedek neighborhood of Tel Aviv that he bought several years ago from Yaron Versano, the husband of Wonder Woman actress Gal Gadot. His representative would not respond to questions about his plans, calling it “a private matter.”

Abramovich is perhaps the most high-profile Russian oligarch to relocate to Israel, but hardly the first.

Alex Kogan, a journalist who has covered the Russian oligarch phenomenon in Israel for the local Russian-language press, said that some 30 to 40 tycoons have taken Israeli citizenship or residency, with most staying only part-time or temporarily because of scrutiny over their affairs.

He said the oligarchs — businessmen who accumulated massive wealth in the privatization process that followed the collapse of the Soviet Union — were motivated by various interests. Some fled Russia because of financial irregularities or dramatic fallouts with Putin that could put them at risk of incarceration.

Others were closer to the government and sought the advantages of an Israeli passport, such as visa-free entry to the European Union. Some were drawn by tax breaks for new immigrants to Israel. They are also more protected in Israel against the threat of extradition, for real or trumped-up charges. Israel was created in the wake of the Nazi Holocaust and has long served as a haven for Jews escaping persecution.

“Everyone has different reasons,” said Kogan. “There are plenty more out there that could come in a short time.”

Some billionaires, like Mikhail Fridman and German Khan, have taken up Israeli citizenship while still maintaining their primary residences in London and Moscow. They maintain a strong presence in Israel owing to their charitable work, such as setting up the private foundation that funds the annual Genesis Prize, known as “the Jewish Nobel Prize.”

Here’s a look at some of the others who have made the move and immigrated to Israel, at least temporarily:

Nevzlin is the most high-profile of the oil executive associates of Mikhail Khodorkovsky who fled Russian arrest warrants in 2003. Khodorkovsky, the onetime head of the Yukos oil giant, was jailed for several years after clashing with Putin. Nevzlin and his associates, Mikhail Brudno and Vladimir Dubov, lobbied for Khodorkovsky’s release from Israel.

In the years since, Nevzlin has established himself as an influential businessman and philanthropist. He was president of the Russian Jewish Congress, became chairman of the board of trustees at Beit Hatfutsot — the Museum of the Jewish People — and is a member of several bodies of the Jewish Agency, the Jewish National Fund, Hebrew University and Tel Aviv University.

He has also invested in local real estate.

His daughter Irina is married to Yuli Edelstein, the speaker of the Israeli parliament and himself a former political prisoner in the Soviet Union.

For a while, Gaydamak was one of Israel’s most beloved local celebrities. He owned the popular Beitar Jerusalem football club, bought a hospital and a radio station, and gave millions to local charities. During the 2006 Lebanon war with Hezbollah, he erected a beach compound for those fleeing rockets in northern Israel, shelling out some $200,000 for tents, food and entertainment for 5,000 people. Politicians lined up for the lavish parties he threw and he was a fixture in the local tabloids.

However, his stay was clouded by controversy over an international arrest warrant involving the alleged smuggling of weapons to Angola.

After a failed attempt to run for Jerusalem mayor, Gaydamak left the country in 2008 amid financial scandals in Israel and Europe.

A former business partner of Abramovich, Chigrinsky initially headed to Israel to hide from Russian prosecutors investigating his business interests, including the construction of huge Moscow malls and plans to erect the largest building in Europe. He fled Russia in 2009 after a power struggle with rival businessmen and the mayor of Moscow.

Kogan, who is believed to be a Putin ally, owns Moscow’s Domodedovo Airport — the largest in Eastern Europe. Israeli media reported that he invested at least $100 million to build the most luxurious mansion in Israel in 2013, designed in a style resembling the White House, before selling the plot. He then reportedly set an Israeli real estate record when he bought a 1,000-square-meter (nearly 11,000 square foot) apartment in Tel Aviv for a reported $31 million. Just last year, he was reported to have paid millions for Mariah Carey and Elton John to sing at his granddaughter’s wedding.